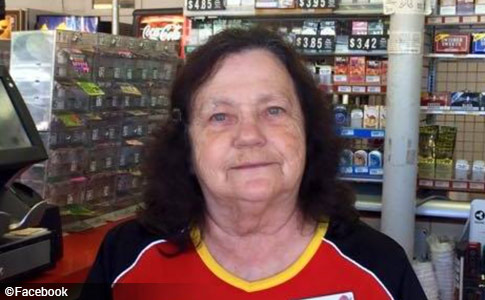 Rosetta Gesselman, 80, died on October 7 after being mauled by her daughter's dogs.

Woman Killed by Dogs
Troup County, GA - Last Friday, an 80-year old woman was killed by three large dogs in her household. At that time, the Troup County Sheriff’s Office and the Troup County Marshall’s Office stated the investigation remained ongoing. Investigators now say the three dogs belonged to her daughter, Tongia Gesselman, 48, who has been charged with felony involuntary manslaughter and reckless conduct. Her three dogs also had a history of violence against animals and people.

"Through a joint investigation, the Troup County Marshal’s Office and our Criminal Investigations Division determined the dog’s owner, Tongia Gesselman, who is the daughter of the victim, knew the dogs had previously killed family pets and had also bit someone which required a hospital visit." - La Grange News, October 14, 2022

On October 7 at about 7:45 pm, Troup County 911 received a call from a resident on Terrace Drive stating that an elderly female was screaming from a window. She needed help because her sister was being attacked by dogs inside the home. When deputies arrived, they found the female, 80-year-old Rosetta Gesselman, lying on the floor suffering with visible injuries. The deputy also encountered three large dogs inside the home that he was forced to deploy O/C spray on.

Emergency aid was rendered to the victim. She was then transported to Well Star West Georgia Medical Center where she later died of her injuries. Sheriff’s officials identified the three dogs as one female pit bull mix and two male pit bull-great mastiff mixes. One of the dogs was captured and subsequently euthanized. Two of the dogs had to be put down at the scene due to their aggressiveness. No future court date for Tongia Gesselman was stated in the news release. 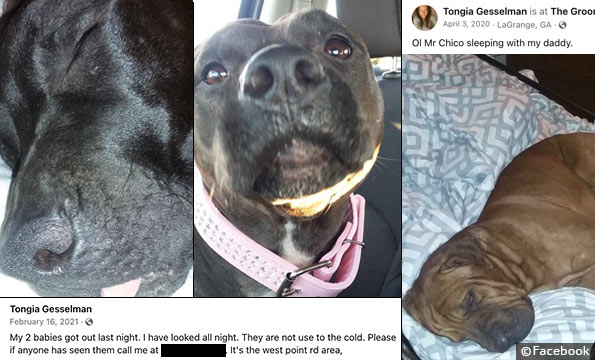 In February 2021, two of Tongia's dogs escaped from the property . In April 2020, she mentions "Ol Mr. Chico," who is a mastiff-type asleep on a bed (there is also Woshi). In July 2020, she states she has "5 very large fur babie. That's why I got us a king sized bed." Tongia also notes that her "pit" (who we believe is Nayla in the pink collar) is "very dog aggressive." 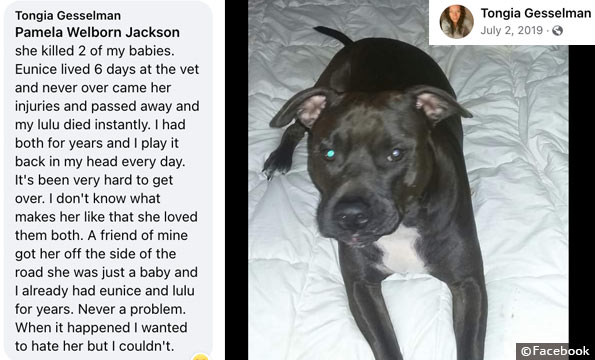 In a July 2019 post, Tongia states that Nayla killed two other family dogs, Eunice and Lulu.