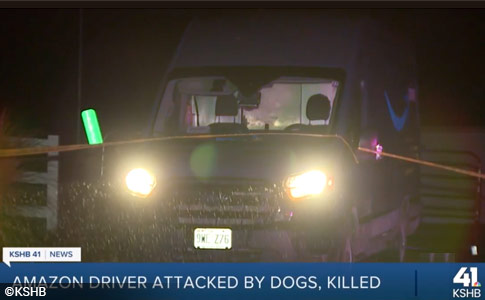 Driver Found Dead
Excelsior Springs, MO - Late Monday, reports began emerging after a driver for Amazon was found dead following a suspected dog attack. Ray County deputies were dispatched to an area on Highway O after a caller said the truck had been parked in front of the house for several hours with its lights and engine running. Arriving deputies found the driver dead in the front yard. Two dogs spotted on scene were highly aggressive. Both dogs were shot and killed at the scene.

“Due to the fact of the nature of some of the injuries to the male driver, we can’t confirm or deny if they were the cause of the death of the driver, however we wanted to be safe,” Sheriff Scott Childers said. The medical examiner will determine the cause of death, Childers said, but the victim's injuries were consistent with being attacked by an animal. The victim's family was notified Monday night. The owners of the dogs were not home at the time of the attack, Childers said.

The two dogs involved in the attack were a German shepherd and an English mastiff, according to Sheriff Scott Childers.

In August, a rural postal carrier in Florida was mauled to death by a pack of dogs after her truck broke down while working her route. Arriving deputies said that 61-year old Pamela Rock, a United States Postal Service carrier, suffered "heavy trauma." Deputies had to apply multiple torniquets to control the bleeding. She had one arm amputated before she died that night. The five dogs had escaped a poorly fenced in area by going underneath it. Apparently, they did so routinely.

In 2017, a UPS driver was nearly killed by five pit bulls. Kevin Backlund, 59, jumped on the back of a trailer to stave off the animals. He survived, but suffered serious injuries. "I was surrounded on all four sides by these pit bulls and with no warning, no provocation whatsoever on my part, they were closing in," Backlund stated afterward. "The fight was on and it wasn’t just the fight, it was the fight of my life,"" Meanwhile, the owner claimed his dogs were just "doing their job."

In 2016, a process server was killed by a pack of dogs while trying to serve papers at the dog owner's home in Central Texas. Erin McCleskey, 36, was found dead, lying near the front gate of the property. She had exited her vehicle, leaving it running, and opened the front gate of the property. As soon she entered, she encountered the pack of dogs. Due to the dogs' owner fighting the euthanasia order, the dogs were not put down until after a trial was held in November 2017.