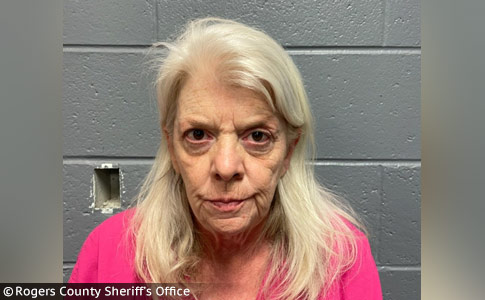 Rise Morrow is charged with manslaughter in the 2nd degree, "Owner of a Dog that Kills."

Man Died After Bite Injuries
Claremore, OK - On May 9, reporter Lori Fullbright of Tulsa-based KOTV, published part of a charging document on her Facebook page. Otherwise, we have seen no other news reports about these charges or the multiple victims involved. Rise Jo Morrow (also known as Risa), who is in her 60s, was charged with second-degree manslaughter, "Owner of a Dog that Kills," on March 25, 2022. She was ordered to return to court on April 25th, but instead, Morrow failed to appear.

The date of the offense is November 26, 2020, when her pit bull with an excessive bite history, attacked three adults. One of them later died.

Since 2016, her male pit bull, named "Hurley," has attacked a half dozen people. At least three victims suffered serious injuries, requiring hospitalization and surgical procedures. All of these attacks occurred when the victim was visiting Morrow's home. Predictably, the dog's vicious attacks escalate over the years, culminating in the November 2020 attack involving three victims. One of those victims, an adult male, died in 2021. Sepsis and wounds contributed to his death.

In June 2016, Hurley attacked a man's face, a friend, who had been coming to her home. His injuries required surgery. In November 2016, the dog attacked another man who was visiting Morrow's home. "Those injuries were disfiguring." Morrow was issued a ticket for harboring a vicious dog. Between 2017 and 2018, the dog knocked a woman down who had come to Morrow's home to report a water leak. The dog stayed on top of the victim until Morrow called off the dog.

In November 2020, Hurley attacked three people in a multi-victim attack. The first victim, a woman, was bitten so badly, she required long-term hospitalization. Another woman, who tried to help the first victim, suffered multiple bites to her thigh and breast. The first victim's husband also intervened to help his wife; he suffered multiple bite wounds to his stomach and thighs. In January 2021, the husband returned to the hospital for his dog bite injuries that became septic and he died.

-June 2016: her pit bull named Hurley bit a man's face who was a friend who was coming to the Morrow home. His injuries required surgery.

-November 2016: the dog bit a man who was visiting. Those injuries were disfiguring and Morrow was issued a ticket for harboring a vicious dog.

-2017 or 2018: the dog knocked down a woman who was coming to the Morrow home to report a water leak and the dog stayed on top of the victim until Morrow called off the dog.

-When a woman tried to help the victims, she was bitten on the thigh and breast.

-Another woman was bitten and her injuries required long term hospitalization.

-When that woman's husband tried to help her, he was bitten several times in the stomach and thighs.

-2021: That man went back to the hospital for his dog bite injuries that became septic and he died.

-The autopsy says sepsis and wounds contributed to his death. - Lori Fullbright

Morrow is being charged under Section § 21-717 of state code: "Owner of mischievous animal which kills person. If the owner of a mischievous animal, knowing its propensities, willfully suffers it to go at large, or keeps it without ordinary care, and such animal, while so at large or not confined, kills any human being who has taken all the precautions which the circumstances permitted, to avoid such animal, the owner is deemed guilty of manslaughter in the second degree."

During the dog's last vicious attack, Hurley mauled a married couple and a woman who tried to intervene. The wife in the married couple required long-term hospitalization. After receiving initial care for his wounds, her husband "returned" to the hospital because his bite injuries became infected. Sepsis and wounds were contributing factors to his death, according to the autopsy. The amount of misery this couple has suffered due to a known vicious dog cannot be calculated.

On April 26, 2022, a $40,000 bench warrant was issued for Morrow for failure to appear in court. On May 10, a judge issued a forfeiture for Morrow's initial bail amount of $20,000. The bondsman was ordered to deposit the $20,000 to the court within 91 days. However, Morrow was located that very day and held in custody at the Rogers County Jail, according to court filings. Her next scheduled court date is an arraignment on May 16. The court appointed OIDS as her counsel.1

Our nonprofit certainly includes sepsis and infection-related dog bite injury deaths involving vicious dog attacks that result in severe injuries that received medical treatment. Currently, we exclude "untreated severe dog bites (sepsis)" cases, but these "may be added to our data at a future time," we state on multiple pages. Furthermore, this dog owner is facing manslaughter charges due to this man's death. "Sepsis and wounds" contributed to his death, according to charging documents.

Baseline reporting requirements:
Law enforcement departments across the United States should release consistent "baseline" information to the media and the public after each fatal dog mauling, including these items.
Tweet
Share363
Tweet
Share363
Donate Now