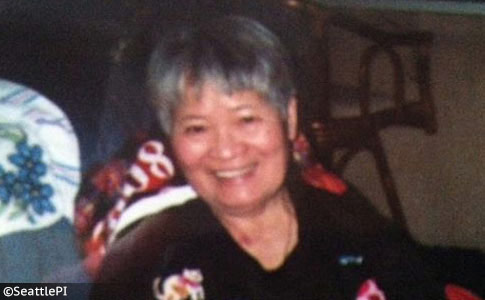 Family Wins Judgment
In June 2014, the family of a woman who died of injuries after a vicious pit bull attack won a victory in court. Superior Court Judge Stan Rumbaugh ruled that Santiago Quezada, who owned the two pit bulls linked to the attack, owed Nga Woodhead’s family $1.12 million. Attorney Jason Whalen, who represented Charles Woodhead, Nga’s husband, said the family probably won’t be able to collect the debt. At least, however, the verdict becomes part of an official record, he said.

Attorney Jason Whalen represented Charles Woodhead, Nga’s husband. Whalen noted that the family probably won’t be able to collect the debt. He said it becomes part of an official record and sends a message to owners of dangerous dogs who do not take proper steps to restrain them.

“We’re ensuring that some sense of justice was done for an owner of vicious dogs that failed to take responsibility,” Whalen said. “Knowing this would be an uncollectable judgment, we’ve still established that those who own dogs that cause damage to another within a public right of way are liable for the harm.”

Quezada appeared in court without an attorney. He was never charged with a crime. The Medical Examiner’s Office concluded the dog attack caused Woodhead’s death. Prosecutors reviewed the case for three months, but could not build sufficient evidence to support a criminal charge; it was too difficult to prove Quezada knew his dogs were dangerous before they escaped. - Tacoma Tribune, June 6, 2014

11/07/13: Cause of Death Released
The Seattle Times reported earlier today that the Pierce County Medical Examiner's Office said 65-year old Nga Woodhead died of a heart attack brought on by "extremity contusions, lacerations and fractures due to dog bites." The Pierce County Sheriff's Department plans to recommend to prosecutors to file criminal charges against the owner of the pit bulls, Santiago Quecada. "They were his dogs," sheriff’s spokesman Ed Troyer said, "They should have been locked up."

On October 30, Nga was on her daily walk, about a mile from her Spanaway home, when the two pit bulls began attacking, her husband Charles Woodhead said. "She didn’t see the dogs coming. They ran up behind her and attacked," he said. Charles was with his wife in her hospital room on Tuesday when her heart stopped. The couple had been married for 41-years. Their 42nd wedding anniversary was Wednesday; the day the medical examiner's office released her cause of death.

"I’m sad and mad. I’m mad at an owner who has two pit bulls who should have known better." - Charles Woodhead

While under attack by the dogs, Nga was able to call her husband from her cellphone, but she could not tell him where she was. It was a passerby who tried to help Nga that got on the line and gave Charles their location. He arrived on scene minutes after the attack as medics were loading her into an ambulance. Her right arm was shredded and bruises covered her body, he said. The couple met in 1970 when he was stationed in the Air Force in South Vietnam during the war.

Nga Woodhead, 65, is the 375th American killed by pit bulls since we began the Archival Record.

11/06/13: Autopsy Underway
Spanaway, WA - A 65-year old woman attacked by two pit bulls on October 30 has died of her injuries, according to the Pierce County Sheriff's Department. Nga Woodhead of Spanaway was attacked by two loose pit bulls as she walked down Pacific Avenue South. The animals jumped on her, knocked her into a ditch and began to horribly maul her. A 52-year old man who tried to save her was also badly bitten. Another passerby shot and hit one of the pit bulls causing it to run away.

After the vicious attack, the Pierce County Prosecutor's Office began looking into charges against the dogs' owner, Santiago Quezada who lives just down the street from where the incident occurred. Quezada said he didn't know how the dogs got out of his fenced yard and claimed then, "They're really nice dogs. They were raised with a family, with kids." Quezada also tellingly said, "I just want to say I feel really sorry about the people. And we're going to fix things, you know."

According to the victim's husband Chuck Woodhead, his wife died suddenly at the hospital where she was taken after the severe attack. He said he was in her room getting ready to be released from the hospital Tuesday when she lost consciousness. Doctors tried to revive her, but were unsuccessful. An autopsy is currently underway. Her husband also told KOMO News that he was told by animal control that Pierce County will pursue criminal charges against the dogs' owner.

One of the brave men that came to Nga's rescue left a comment on the KOMO News article.

Driving southbound on SR7 from the American Lake VA Hospital I saw a middle aged heavy set woman jumping and screaming for help on the other side and then I saw two dogs mauling something in the ditch. Assuming the worst, her child I veered to the center land, hit the hazards and jumping out bounding across two lanes of heavy traffic at 0900 on October 30th to find two pit bulls mauled a senior Asian woman. This woman was clearly severely injured and unable to defend herself as the two dog had her quartered and ripping arm and leg. Her clothes were already half ripped off and deep lacerations were clearly evident. I immediately start growing, yelling and punching the larger male pit bull in the nose as both dog turned their attack to me. Punching both dogs to lured them into oncoming traffic, I focused my attack on the alpha male and kicked at the female dog to insure both pursued me into traffic to use the passing vehicles as weapons since I was unarmed due to visiting the VA and passing through Joint Base Lewis McChord, Russian Roulette being better than certain death. Unfortunately a white sedan missed me and stopped short of hitting the larger male pit bull. I advanced on the animal taking control pounding its head into the road as the small female got my left upper thigh. Once that female dog locked on my thigh I tried to through the larger male pit bull into the next lane of traffic as a desperate act but the collar broke. I knew I had to stop traffic to get help. When that collar broke I turned my blows to the female's nose to break her locked jaw on my thigh. With success I immediate lunged on to the white sedan that was blocking one lane of traffic to catch my breath and access the situation. The male pit bull got my leather sneaker and was trying to pull me from the hood on the car. I saw cars stopping and a truck driving up the side walk to the woman location and the female dog was back at the old woman again as I kicked the male in the nose. I jumped and run to the ditch for the female dog to get it off the woman again as the male dog pursued me. I laid into the female dog punching and two men approached from different direction to the woman and the truck that came up the side walk. The three men were able to distract the male pit bull as I attacked the female pit again to get it off the victim. The female dog pursue me back into the street as I continued punching hoping the two men and truck driver would be able to keep the larger male dog off me. I shouted orders to the truck driver to run that dog down and kill it while the two men kept it off as I fought the female back into the street. One man was bit by the male dog while I was fighting the female in the middle of the street. Bystanders were approaching and some woman actually screamed at me to leave that dog alone!!!! I was slowing with exhaustion and the male pit bull left the man, truck and victim and came to the female pit bulls aide. In total exhaustion and was unable to counter the attack and the male dog locked onto my right forearm and latched cracking bones and ripping flesh. The cracking of bone was an instant shock and an eternity of hesitation. I punched it nose and pulled to prevent my arm from elbow or shoulder damage as I was taken down. The female bit my left punching fist so I used her head to hit the male dog and break it hold. Only with God's help it worked and I crawled to the hood of the white sedan again with female dog pulling at my feet. Unable to continue severely injured myself, I scrambled to the roof of the car. The pickup driver on the sidewalk in his truck next to the victim fired a personal sidearm as the male pit bull return to the two men and victim. I thank the off duty soldier and promised to bear witness. The inured male dog fled. With the knowledge of backup I scrambled to the victim to access and triage but the female dog returned to me and the victim. I gave orders of assessment to a new male bystander for the triage of the victim as I had to fight the female dog again. Due to shock, injury and exhaustion the female dog was able to easy lock onto my injured right forearm and able to crack bone again. With a punch to the nose I was able to return to the victim and make a visual of the injuries, Deep laceration to the all extremities with bicep hanging. I order the victim covered from the cold until professional help arrived. I scampered to my vehicle to call Brenda Roman to get the kids to school and come to my location and help me back to the hospital. As police approached I directed and order them to kill female pit bull as I limped back toward the animal that the men were keeping abbey from me and the victim. Three Sheriffs isolated the dog as I directed paramedics to the victim not me. Once the police finally shot the last dog and I was answering the medic’s questions I provided the police with ID and initial brief. Medics recommend I go with them, but I choose to return to my clinic where I knew everyone. Injured soldier that helped offered ride to nearby Madigan Army Hospital. Again I declined choosing to return to my Urgent Care at American Lake VA Hospital where I know everyone. - Ranger Rob 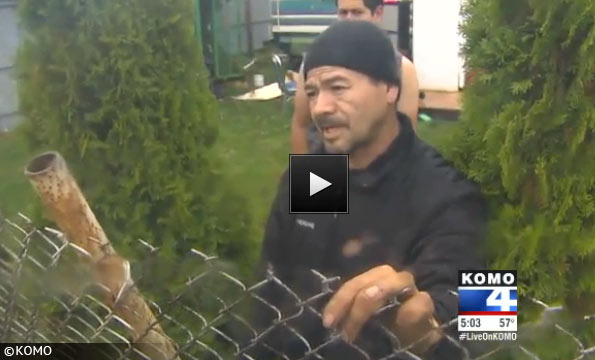 Santiago Quezada, who owned the two pit bulls, is seen talking to a KOMO News reporter.