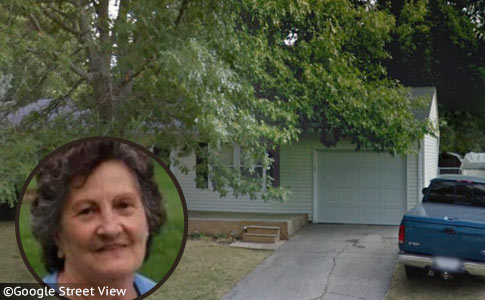 After five dogs killed his mother in September, the son wants dogs returned to him.

Killer Dogs Returned
UPDATE 10/15/21: All five dogs implicated in the death and partial dismemberment of 84-year old Loretta Moore have been released to their owners. Boone County authorities had wanted to euthanize the dogs, as all five reportedly had blood stains around their mouths. The owner of the dogs, James Moore, is the victim's son, who also lives at the home and found his mother's body when he returned home from work that day. Moore fought to get his dogs returned to him.

State, county and local laws have no provision for euthanizing dogs that kill a person at home. Boone County officials were forced to return all five dogs to their owners. A pit bull that James had been fostering for about a month was returned to Lucci’s House Bully Rescue of Indianapolis. That dog can never return to Boone County. The four other medium to large-sized dogs, including two huskies, belonging to James, were returned to him under an agreement with the county.

First and foremost, James can never sue the county for any potential aggressive conduct by the dogs and the county has each dog's chip information, according to Robert Clutter, an attorney for the Boone County Commissioners. "They must be contained to his property at all times," Clutter said. James has a six-foot fence around the backyard and the dogs may be in the house or in the fenced yard with the gate secured. The dogs are not allowed to leave the property without a leash.

10/09/21: Woman Dies, Dogs Live
Lebanon, IN - 84-year old Loretta Mae Moore was found dead on September 14 at a home on Elizabeth Drive. Boone County Coroner Justin Sparks said an autopsy determined her cause of death to be mutilation by dogs. The five dogs -- a pit bull, two huskies and two others -- belonged to the victim's son, who also lives at the home. The dogs will likely escape euthanasia because local and state laws do not adequately address vicious dog attacks on their owners' property.

James Moore's four dogs and a fifth dog he was fostering, a pit bull, were in the home they shared in the 1400 block of Elizabeth Drive when he left for work on September 14. James found his mother's body when he returned that day, according to police. Part of her arm was missing and has never been found, reports the Herald Bulletin. All five dogs had apparent blood stains around their mouths, according to the county’s petition to destroy the dogs filed on September 24.

Robert Clutter, an attorney for the Boone County Commissioners, explained that Lebanon, Boone County, and the state of Indiana lack laws to give the authority to euthanize dogs that attack on their owner’s property. “I guess none of us contemplated this type of situation,” Clutter said. “We are trying to find a way to dispose of the dogs." There are many remedies for off-property dog attacks, he said. But there are "very limited remedies – almost none" for on-property dog attacks.

“None of us contemplated this type of situation," echos the response by city and county officials after two pit bulls killed a child in North Carolina earlier this year. In another on-property attack, Jayden and her mother went next door to care for their neighbor's pit bulls while the owners were out of town. The dogs killed Jayden and severely injured her mother. The owners demanded their dogs be returned to them due to the city's ordinance failing to contemplate this type of situation.

To be clear, the failure of these local and state laws is the failure to account for the owners of dogs that kill a person who demand their dogs be returned to them afterward. James wants his five dogs back after they mutilated and ate part of his mother. The North Carolina owners wanted their two pit bulls back after killing a 7-year old child and severely injuring her mother. Prior to modern times, owners such as these, would have surrendered their dogs to authorities for euthanasia.

Had the Boone County Sheriff's Office and Board of Commissioners not petitioned James Ray Moore and Lucci's House Bully Rescue (the owner of the pit bull being fostered), this death may not have been reported by the media at all. An elderly woman killed by a family pit bull falls into the most likely unreported fatal dog attacks, which is an adult ≥ 40 years old killed by a single or pair of family pit bulls in a city area, of which 89% of cases occurred on the owner's property.

The pit bull that James had been fostering came from Lucci's House Bully Rescue of Indianapolis. The county reached an agreement with the rescue and released "Chance" to its custody Monday (Case no. 06C01-2109-MI-001296). “We agreed to permanent placement outside of Boone County and with a trainer who is very used to working with dogs who have behavioral issues,” Clutter said. “As part of the agreement, the dog is not allowed back in Boone County."

The county has been unable to arrive at "satisfactory negotiations" with James' attorney regarding the remaining four dogs. “We’re trying to look toward a possible release of the dogs that would still protect the public as much as we can,” Clutter said. “We’re looking at a number of options. Mr. Moore’s attorney has been receptive to some different suggestions. It’s just all-around a terrible, traumatic situation," he said. We shall add, made more miserable and traumatic by James.