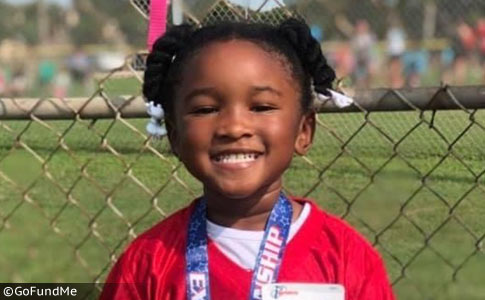 Elayah Brown, 4-years old, died after being attacked by a family dog in Fort Worth.

Dog Kills Child
Fort Worth, TX - On Friday, a 4-year old girl was attacked by a dog at a South Fort Worth home. The attack occurred in the 1400 block of Oak Grove Road just after 5:00 pm. Arriving officers found the child seriously injured by the dog in the backyard. She was taken to Cook Children's Medical Center in critical condition, where she later died. The Tarrant County Medical Examiner identified her as Elayah Brown. Fort Worth animal care and control took custody of the dog.

"The sole dog responsible for this incident has been identified and is in the custody of Fort Worth animal care and control," police said in a news release Friday. Crimes Against Children Unit detectives are also investigating. "Anytime there is a loss of life, it’s a tragic incident. Our thoughts and prayers go out to the family and all first responders that responded to this call," Fort Worth Police Chief Neil Noakes said. The circumstances of the deadly attack were not released.

Fox 4 News captured footage of a fawn colored dog with blood on its coat being led to an animal control vehicle by a catch pole. The male, unaltered dog, is clearly a pit bull-mix -- see additional screenshots. The wide skull, head shape and ears are predominantly pit bull; the tail and fur are a mixture of another breed. There were two dogs in the family's household, reports Fox 4 News, one of the dogs was not responsible for the attack and was not taken into custody by animal control.

The family started a GoFundMe to help pay for the child's funeral costs. Police released no additional information. A spokeswoman for the city, Diane Covey, made a peculiar statement to the Star-Telegram, indicating that she couldn't name any predominant breeds. Currently the city's shelters are holding 355 dogs. Zero of these dogs are listed solely as "mixed breeds." 100% of these dogs have a predominant breed listed and many also have a secondary breed listed.

Churro is a good example of a pit bull's wide skull, head shape and ears, where the tail and fur are a mixture of another breed. Churro is listed as a pit bull-mix. Furthermore, the idea that breed is solely determined by physical appearance is invalid. Appellate courts have long ruled, "Pit bull dogs possess unique and readily identifiable physical and behavioral traits which are capable of recognition both by dog owners of ordinary intelligence and by enforcement personnel."

The dog owner of ordinary intelligence, when determining whether he or she owns a pit bull dog, need not rely solely on the dog's physical traits. Rather, the pit bull possesses certain distinctive behavioral features which differentiate it from other dog breeds…the trait of unusual relentless ferocity or the extreme concentration on fighting and attacking…the quality of gameness, which it described as "the propensity to catch and maul an attacked victim unrelentingly until death occurs"…When these behavioral traits are taken together with the physical characteristics described above, a fairly clear picture of a dog "commonly known as a pit bull dog" begins to emerge…Pit bull dogs possess unique and readily identifiable physical and behavioral traits which are capable of recognition both by dog owners of ordinary intelligence and by enforcement personnel... - Ohio v. Anderson, Supreme Court of Ohio (1991) 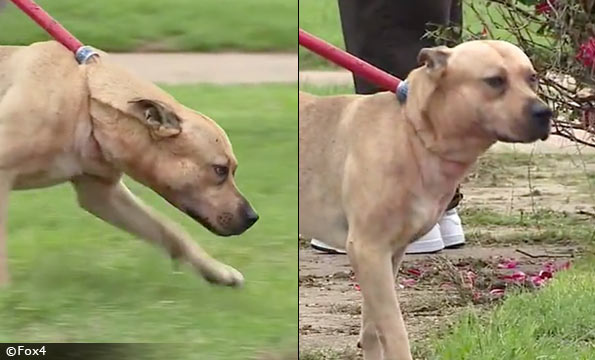 Images of the male family dog with blood on its fur being taken into custody by animal control.

Baseline reporting requirements:
Law enforcement departments across the United States should release consistent "baseline" information to the media and the public after each fatal dog mauling, including these items.
Share509
Share509
Donate Now