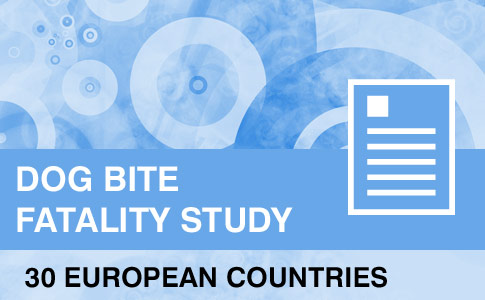 Open Access Study
Sweden - In January 2021, the first study examining dog bite fatalities in 30 European countries was published. The cause of death data was collected from Eurostat, similar to how CDC collects this data for all 50 states. In 2011, reporting data to Eurostat became mandatory under EU Commission regulations. The study found that the number of European fatalities due to dog attacks increased "significantly at a rate of several percent per year" over the period studied.

The number of European fatalities due to dog attacks increased significantly at a rate of several percent per year. This increase could not be explained by increases in the human or the dog populations…

We detected a strong increase in number of fatal dog attacks over time, which of course is of concern. This increase could be seen both over a shorter (6 yr) and a longer (20 yr) time frame, and it matches a similar increase in the USA. The increase in fatalities could not be explained as a simple function of there being more dogs, because the increase was more rapid than the increase in the dog population. - (Sarenbo et al., 2021)

This is a study involving small death numbers accrued over a 22-year period. Countries with the highest number of dog bite bite fatalities between 1995 and 2016 include: Hungary (94), France (79), Romania (67), United Kingdom (56) and Poland (49). Overall, 599 deaths were coded as W54 deaths, "bitten or struck by dog," the same ICD-10 code that US hospitals use (The International Statistical Classification of Diseases and Related Health Problems, Tenth Revision).

Due to some countries not reporting data to Eurostat prior to 2011, the study estimated the actual number of deaths to be closer to 827. "The true number of Europeans killed by being bitten or struck by dogs during these 22 years should therefore lie somewhere between 599 and 827, but considering the large amount of unreported years (26%), it may be closer to the latter," states the study. Eurostat may also underreport small death numbers, just as CDC Wonder is presumed to.1

Common criticisms by pit bull factions is that fatal dog attacks are rare; therefore fatality statistics are irrelevant. Now we see the first dog bite fatality study encompassing 30 European countries. The authors state, "The numbers of fatalities are indeed a very small tip of the 'dog attack iceberg', and the number of dog attacks that lead to hospitalizations of the victim outnumber fatalities by several orders of magnitude." The tip of the "dog attack iceberg" indicates a much larger problem.

Given that this study is open access, we will only address a few key parts in various sections. In the introduction, we were struck by the bold language in the second paragraph that describes the injuries victims sustain in severe and fatal dog attacks. A face being "ripped off" and "decapitation has been reported" are not phrases we see in US peer-review. The two decapitations involved an attack by a pit bull and a "large male mixed-breed terrier." Both victims were male infants.2,3

Attacks that cause severe injury or death in a human victim are relatively rare, but when they do occur, the dogs tend to drag their preys down or bite the limbs in order to disable the victim, and then continue biting. Dogs in fatal attacks have often targeted the "throat, neck, or cranium, and if the attack continues, death will finally result from asphyxiation, exsanguination, or a fractured cranium and its complications". The neck is the most common area for fatal attacks by predatory wild canids, presumably because this site is the most vulnerable. The victim’s scalp and/or face can be severely damaged and even ripped off, with exsanguination as on consequence. Also decapitation has been reported. Severe dog attacks are characterized by repeated, focused biting and shaking until the victim is no longer moving, and that the victim or any person intervening having extreme difficulties ending the attack. - (Sarenbo et al., 2021)

In the discussion section, the authors suggest explanations for the rising number of fatalities. One being the increasing popularity of dog breeds that have the potential to kill adult humans. Since W54 does not track breed of dog involved, the authors point to breeds that are "recurrently identified as perpetrators in literature concerning fatal dog attacks" as "indirect evidence" that an increasing number of dangerous breeds can partly explain the observed increase in fatalities.

One explanation for the increase in number of fatalities could be that people have changed in the way they train, keep and interact with dogs. Another potential explanation is the increasing popularity of dog breeds that have the potential to kill also adult humans. These types of explanations needs to be investigated using other methods than ICD data. However, some indirect evidence already exist that an increasing number of dangerous breeds can partly explain the observed increase in fatalities. The following dog types (purebred or not, and according to the FCI classification of dog breeds) are recurrently identified as perpetrators in literature concerning fatal dog attacks: Bull type terriers (FCI Group 3.), Mastiff type (FCI Group 2.), Nordic Sledge dogs and Asian Spitz and related breeds (FCI Group 5), and Sheepdogs originating from Germany in FCI Group 1. - (Sarenbo et al., 2021)

The next paragraph is purely European. It perhaps never would be found in US peer-review. The authors want to discuss the "breeding, marketing and selling" of "high-risk breeds" and the liability of these breeders. They also want to know if there were other offspring made from the same parental material as the fatally attacking dog. The current lack of "breeder traceability" is a "potential source of risk to the health of not only the animals but also the public," states the study.

In the US, there is rarely an effort by police to find the source of the fatally attacking dog (parental material) or the dog's siblings that came from the same litter. In the US, after a dog kills a person, officials quickly adopt out any puppies the dog may have had. The scientific "heritability of behavior," particularly aggressive behavior, is rarely researched in the US. When realized, heritability of abnormal aggression destroys the false claim, "It's all how you raise them."4

Breeding, marketing and selling "high-risk breeds" and the liability of breeders needs to be discussed in connection with fatal dog attacks. Important information includes who bred and raised the dog in question, if there were more litters from same parental material, the criteria the breeders used when selecting the breeding stock and to whom is the breeder sells the puppies. However, the traceability of dogs to their breeder is typically not possible in Europe because only one EU member state, Belgium, registers hobby breeders. The lack of breeder traceability has been described as "a potential source of risk to the health of not only the animals but also the public". - (Sarenbo et al., 2021)

The authors also comment on the dangerous false claims made by kennel clubs, regarding pit bulls and children. These false claims in the UKC, AKC and KC breed standards for pit bull breeds are responsible for children being killed by these dogs every year. The authors comment on the Nanny Dog myth invented by a Staffordshire bull terrier fancier as well. "The marketing of dog breeds as 'nanny dogs' should be prohibited because there is no evidence that such dogs exist."5

Breeds such as Pit Bull terrier and Staffordshire Bull terrier are described in Breed Standards as "excellent family companions and have always been noted for their love of children" or "Highly intelligent and affectionate especially with children" despite their history as fighting dogs, their weight and strength. Their specific style of biting, "hold and tear", can cause fatal injuries in minutes, and the biting combined with violent shaking exacerbates the injuries. Additionally, bull breeds are known to be aggressive to other dogs, which indirectly increases the risk of injuries to humans who may try to protect their own dogs from the attacking dog…

Second, the marketing of dog breeds as "nanny dogs" should be prohibited because there is no evidence that such dogs exist. Third, we believe that all dogs should be traceable to their breeder, that dogs belonging to high-risk breeds should wear a muzzle when visiting public areas, and never left under supervision of inexperienced temporary keepers. - (Sarenbo et al., 2021)

We could not agree more that fatally attacking dogs should be traceable to their breeder and that high-risk dog breeds should be muzzled when in public areas and never left under supervision of inexperienced or temporary keepers. A number of US fatal dog attacks have occurred under both scenarios. Legislating that would prove difficult in the US, but certainly parts of Europe have tried. Many European countries are light years ahead of the US regarding dangerous dog breeds.6

The gender differences between Europe and the US are interesting too. In the European study, males dominated the 30-69 age groups and with statistical significance in the 40-59 age groups. In CDC Wonder data, males led 40-69 age groups, but not with significance. In DogsBite.org data, females led every age group 30 and older. In the 70 and older age groups, females predictably dominated all 3 data sets (Euro, CDC and DogsBite), as women tend to live longer than men.

View: Comparison Chart: US vs. European Age and Genders in Fatal Dog Maulings

Both study authors are faculty members of Health and Life Sciences, Department of Biology and Environmental Science at Linnaeus University in Sweden. The authors report no declarations of competing interests -- this neutrality clearly shows in the study. Disinterest, however, is not always true in peer-review. For a decade, studies produced by the US Pit Bull Lobby contained hidden conflicts of interest. Perhaps unknown to these authors, they cited one (Patronek et al., 2013).

In 2020, American researchers finally exposed these hidden conflicts of interest -- we first documented this fact in 2016. For a decade, the peer-review community has been influenced and misled by this literature authored and funded by undisclosed pit bull advocacy groups. Every study with deliberately hidden conflicts of interest is intended to show that pit bulls are unidentifiable, pit bulls do not kill more people than other dog breeds and that breed-specific laws are ineffective.7

Fatal attacks inflicted by dogs are increasing in Europe. This increase in deaths outpaces growth in human and canine populations. One possibility for this increase is that people have changed the way they train, keep and interact with dogs. Another possibility is the "increasing popularity of dog breeds that have the potential to kill also adult humans," states the study. This cannot be determined by using Eurostat or CDC Wonder data, which excludes breed and narrative data.

The Swedish authors are a fresh and much-welcomed new voice for victims of serious and fatal dog maulings. Phrases like, fatalities are just a "small tip of the dog attack iceberg" illustrate how large this problem is in Europe and the US. Phrases like, "decapitation has been reported" and that exsanguination resulted from a face or scalp being "ripped off" are vivid descriptors of the severe damage victims sustain in violent dog attacks that we do not see in US peer-review.

Finally, calling out the false claims in kennel club breed standards, stating that pit bulls/Staffies "have always been noted for their love of children" and are "highly intelligent and affectionate especially with children," despite their history as fighting dogs, is long overdue. These US and UK kennel clubs deliberately lie to the public. The European study also states that marketing dog breeds as "nanny dogs" should be prohibited because there is no evidence that such dogs exist. 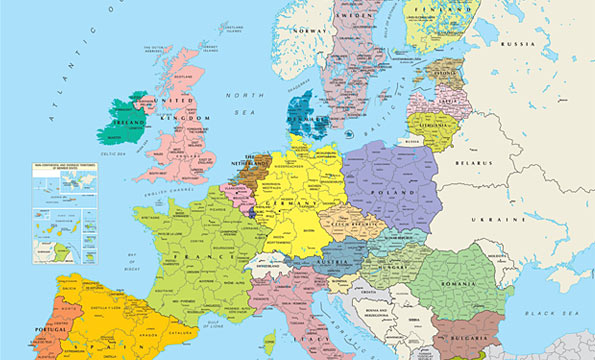 30 countries = 27 member states of the European Union, plus UK, Switzerland and Norway.

(Editorial Note: On May 9, 2021, we updated the age group and gender data comparison charts to include comparisons between Eurostat data, CDC Wonder data and DogsBite.org data.)