On April 22, 2021 a hearing was held for Jayce's Law, a proposed statewide pit bull law in South Carolina. Powerful testimony was given by his mother and the Charleston Animal Society.

Columbia, SC - On Thursday, "Jayce’s Law," H. 4094, sponsored by Rep. Huggins, had a hearing in the Special Laws Subcommittee of the House Judiciary Committee. It was a fantastic hearing with powerful testimony by Joe Elmore, president and CEO of the Charleston Animal Society, Jayce's mother, Victoria LaBar, Tallulah McGee, Director of Beaufort County Animal Services and Barbara Nelson, President of the SPCA Albrecht Center for Animal Welfare in Aiken County.

The hearing and this bill, the "fertile pit bull" bill, are both highly unusual events. Today, we saw a passionate Elmore, speaking on behalf of state animal sheltering organizations that support a breed-specific law. The bill would not affect any person whose pit bull is sterilized and microchipped -- the bill is not mandatory. Jayce's Law would charge a $25 fee to maintain a fertile pit bull that is not microchipped. For identification purposes, the microchip component is critical.

Emore testified about multiple fatal pit bull attacks, the death of Jayce in January and Ethel Horton, who was killed in Lee County in 2010. "This affects men, women, children, black, white, elderly. It affects all of us South Carolinians. It affects our families," he said. "The most pressing issue for animal shelters, in costing millions of dollars each year, taxpayer dollars and donor dollars, is the disproportionately large number of pit bull-type dogs" that are not altered.

Elmore brought compelling state animal shelter data to the table during his testimony. (Note also, this 2021 peer-reviewed study where Charleston Animal Society provided the animal data: Characterizing unsuccessful animal adoptions: age and breed predict the likelihood of return, reasons for return and post-return outcomes). Elmore also expressed how much support the bill has among South Carolina shelters, "those of us working on the front lines" in this state, he said.

Number two, pit bull-type dogs are disproportionately euthanized due to the overwhelming numbers of them ... [local shelter data] indicated that nearly half of the types of dogs put down were pit bull-types of dogs.

Pit bull-type dogs are the exclusive dog of choice for dogfighting.

This legislation addresses four problems. Incentivizing spay/neuter. Relieving significant burdens on animal shelters. Reducing the number of dogs available to dogfighting. Mitigating the amount of harm caused to humans by fertile pit bull types of dogs and raising awareness about the plight of these dogs…

As Elmore states in his testimony, the only groups that oppose the bill are out-of-state -- the same groups we deal with every year when fighting state preemption bills that would prohibit local pit bull ordinances. The Big Three: American Kennel Club (AKC) and Animal Farm Foundation, both New York-based and Best Friends Animal Society, Utah-based. Notably, it was brought up several times during testimony that this national kennel club does not even recognize the pit bull breed.

Elmore also stated the following, of which we may hear about more down the road: "The Animal Farm Foundation is suspended in South Carolina. Today, it is suspended by our Secretary of Commerce. I see no standing for these three organizations," he said. "The AKC does not even recognize pit bulls as a breed of dog, doesn't run animal shelters, neither does the Animal Farm Foundation." He added about BFAS, "I couldn't even tell you what states surround Utah."

Victoria's livestream to Facebook after her son's death was breathtaking. Her testimony today was breathtaking as well. She is only 23-years old, and she is as brave as they come. She tells her story of the stray pit bull that ended up on her property that was not fixed. She contacted animal control, but the pit bull was not microchipped. "The bottom line is, a phone call could have saved my son's life. If whoever owned that dog had just called and reported him missing," she said.

"In less than three seconds, my life changed. Eight days the dog was with us. He showed no signs of anything. Until he just walked up to my son and ripped out his throat," she said. "If these laws had been in effect, just maybe my son would be alive today. Nothing will bring my son back. My son and a dog died that day, and neither one had to happen ... I had found [the dog] a home. The day the man was supposed to come get him" is the day the dog killed my son, she said.

"We still have no idea who the dog belongs too. We can find no vet records for his rabies vaccines. He had no microchip. He was not fixed."

McGee testified about the mandatory pit bull sterilization ordinance her county passed in 2015 and the success of this ordinance. This success was also possible because the Hilton Head Humane Society provided free pit bull spaying and neutering services. Like San Francisco, which passed the first mandatory pit bull sterilization ordinance in the country in 2005, McGee's shelter used a Fix-It-or-Ticket campaign (administrative tickets) to support the enforcement of the ordinance.

McGee testified that higher penalties should come to those creating the problem. The time and effort required to collect a $25 fee would not be cost effective, she said, but the bill is a step in the right direction. We hope in the future, "we need to be aggressive and hope that administrative tickets would be in enforcement throughout the state. Because the revenue to pay for free sterilization would be from the people who are the problem, not the taxpayers," McGee testified.

Like Elmore, Nelson expressed that her SPCA is "local and on the ground" and is not associated to the New York-based ASPCA. She also reiterated that pit bulls have "historically been bred to have extremely strong jaws and do not let go of their victim. They are the breed of choice for drug dealers, and others who post them as alarms in protection against law enforcement. They have found their way into the general population of dogs, and that is extremely unfortunate." she said.

Nelson also testified about the success of her registration fee ordinance, despite the AKC's opposition. "The AKC, a national organization that does not even recognize the breed of pit bulls, opposed that ordinance," she said. The Aiken ordinance charges $100 to register a fertile dog; it's a lifetime fee. "It worked extremely well," she said. "Registration ordinances for fertile dogs work." In 15 years, she has seen a two-thirds reduction of unaltered dogs brought into her shelter.

"We had no push back from the citizens," she said. "The only push back we had was from AKC. They told me it wouldn't work. They told city council it wouldn't work. Fortunately, city council was progressive enough. They passed the ordinance. You can see that it worked," she said. "Understand that these dogs have the propensity to turn like that if they are fertile -- they have a tendency to be aggressive. I will be happy to answer any of your questions," she said.

Elmore and his South Carolina animal welfare colleagues have done the unthinkable in the eyes of the Big Three. They have fragmented the once all-powerful alliance of animal welfare groups opposing breed-specific laws. Elmore and his colleagues did so because they want to create a safer community for people and to provide a humane solution to the excessive over-breeding of pit bulls. They have mounted a strong force against the Big Three and we wish them success! 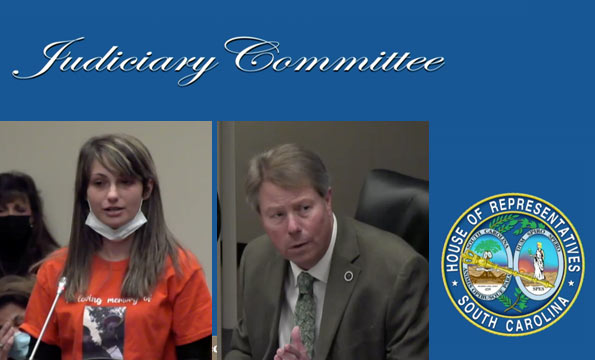 On April 22, a hearing was held for Jayce's Law, the "fertile pit bull" bill in South Carolina. 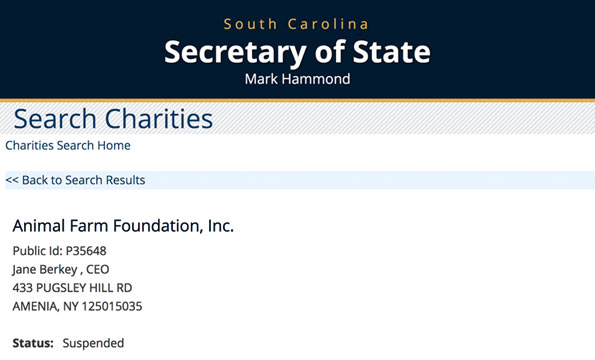 1DHEC is the South Carolina Department of Health and Environmental Control.