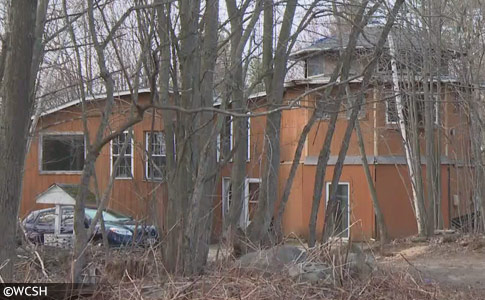 Classic Pit Bull Attack
Lewiston, ME - On Thursday morning, a 71-year old woman was viciously attacked by a loose pit bull while she raked leaves in her own yard. The dog was still actively attacking the woman when police arrived. The first officer on scene said the woman was yelling, "He (the dog) is killing me." The officer Tased the pit bull, which "momentarily" stopped the attack. The pit bull then returned to biting the woman on her face and neck. The officer then shot and killed the attacking pit bull.

After being shot by a firearm, the pit bull was still able to bite the woman one last time before running a short distance and finally dying.

Paramedics rendered medical aid and transported the victim to Central Maine Medical Center in Lewiston where she is currently being treated for injuries to both arms, leg, neck and face. About 2:30 p.m., a relative told the Sun Journal that the woman was undergoing surgery to repair extensive damage to both her arms, her thighs and her face. She described the attack as a "mauling." It is believed the dog broke through a damaged section of a fence to attack the woman.

Audio dispatch files from Lewiston Fire and EMS are chilling. Dispatcher states, "Female actively being attacked by a pit bull." Three minutes later, "Dog is still attacking her. Female's arm and hands are injured. Just won't let go." Then a male voice states, "Tell them to step it up. Tell them to step it up!" Dispatcher tells police, "Can you step it up? United is on scene. Dog still attached to her arm. Won't let go." Finally, a man states, "Dog's been shot. Victim is pretty bad off here."

Listen to the chilling truncated audio dispatch file from Lewiston Fire and EMS.

Pit Bulls also possess the quality of gameness, which is not a totally clear concept, but which can be described as the propensity to catch and maul an attacked victim unrelentingly until death occurs, or as the continuing tenacity and tendency to attack repeatedly for the purpose of killing. It is clear that the unquantifiable, unpredictable aggressiveness and gameness of Pit Bulls make them uniquely dangerous.

Pit Bulls have the following distinctive behavioral characteristics: a) grasping strength, b) climbing and hanging ability, c) weight pulling ability, d) a history of frenzy, which is the trait of unusual relentless ferocity or the extreme concentration on fighting and attacking, e) a history of catching, fighting, and killing instinct, f) the ability to be extremely destructive and aggressive, g) highly tolerant of pain, h) great biting strength, i) undying tenacity and courage and they are highly unpredictable. - Vanater v. Village of South Point (1989)

The 1989 ruling shows that the characteristics of a pit bull attack do not change over time. This is why over 1,000 jurisdictions in the US still regulate the breed. This is why jurisdictions in at least 54 countries worldwide have breed safety laws regulating pit bulls. In 43 of those countries, the regulation is a national-level law. During Wave 1 of state preemption bills, the state of Maine preempted breed-specific laws in 1991, barring local governments from adopting pit bull laws.

Lewiston police identified the owner as 35-year old David Davis of 12 Myrtle Street. Davis was charged with "Keeping a Dangerous Dog, Failing to license and vaccinate a dog and allowing a dog to run at large," according to police. These are all low level crimes (only one is a Class D fine under Maine law).1 Davis is scheduled to answer to those charges at Lewiston District Court on August 11, 2021 -- about 3.5 months later than any other state would schedule this hearing!

At approximately 11:14 am on this date, the Lewiston Police Department responded to a frantic call for assistance at 34 Helen Street. The caller reported a 71 year old woman was "being attacked by a pit bull." The caller further reported the dog was "attached to the elderly female." Reports and updates continued to come in as officers responded to the scene and were updated. The information indicated the woman was on the ground being mauled by the dog and her arm and hand was severely injured. The woman reportedly lost consciousness prior to the officer's arrival as the dog continued its attack.

Upon arriving, a Lewiston police officer took quick action when he observed the dog continuing to aggressively bite the women and noting the woman; laying on the ground screaming for help, had sustained significant, evident injuries to her arm. The woman was clearly in distress and was yelling, "he (the dog) is killing me." The officer tased the animal which momentarily stopped the attack on the woman. The dog then attempted to bite the officer and then turned its attention back to the woman; biting her on the face and neck. The officer; fearing that this bite would result in fatal injuries to the woman, shot the dog once with his handgun in the side. Despite being shot, the dog was able to bite the woman one last time before running a short distance where it died.

Paramedics were on scene and rendered medical assistance and transported the victim to Central Maine Medical Center in Lewiston where she is currently being treated for injuries to both arms, leg, neck and face. This attacked appears to be not provoked as the woman was out raking in and around her yard. Our animal control officer also responded to the scene and is involved in this on-going investigation. The animal will be transported to Augusta for rabies testing.
The dog owner has been identified as 35 year old David Davis, of 12 Myrtle St in Lewiston. At this time, we have charged Davis with Keeping a Dangerous Dog, Failing to license and vaccinate a dog and allowing a dog to run at large. He is scheduled to answer to those charges at Lewiston District Court on August 11, 2021. There is a possibility for additional charges to be filed at the conclusion of the investigation.