DogBiteLaw.com - In 2018, dog bite attorney Kenneth Phillips began a Do Not Adopt a Pit Bull campaign with a Super Bowl-themed video. We most recently wrote about this campaign in late March, noting that a Michigan-based rescue was promoting a free roll of "coveted toilet paper" for the adopter of a pit bull-mix named "Tootie" during their "coronavirus sale." We warned then and continue to warn today, do not adopt a pit bull, especially right now, during the coronavirus crisis.

On Friday April 10, Phillips released a new video, Advice About Breeding Your Pit Bull, which shares the stark figures of the backyard breeding of pit bulls. "There are 4.5 million pit bulls in the USA and 2.4 million of them are up for sale or adoption. More than half," he states. Since last year, "backyard breeders have added another 600,000 unwanted pit bulls to the USA dog population. Pit bulls equal 6% of all the dogs in this country but 50% of all the dogs in shelters."

"One-third of all the pit bulls in the USA are euthanized every year because there are too many of them." - Kenneth Phillips, DogBiteLaw.com

Cities that have adopted breed-specific laws, such as pit bull bans and mandatory pit bull sterilization, are the only jurisdictions that are escaping this reality. These laws are not only for the health and safety of the public, they regulate and whereby reduce an otherwise "unchecked" continuous cycle of new unwanted pit bulls coming into a community, many of which will end up in the shelter system where another desperate advertisement for an unwanted Tootie is created.

"Clearly the breeding of pit bulls is cruel to the dogs, most of which end up homeless and a third of which end up euthanized," Phillips states. "This dog is also intolerably expensive for society, in shelter costs, medical bills, and the tremendous suffering of victims. So my advice for breeding your pit bull is … don't. Stop breeding pit bulls. Do the dog a favor," Phillips states. Pit bulls are the number one canine killer of adults and children and the number one canine killer of women.

"They are the killers of 90% of all pets and horses killed by dogs." - Phillips

"If you don't care about your community, do yourself a favor. When pit bulls attack or kill people, most of the time the victim is the pit bull's owner, or the owner's child, or the owner's parents. Most of the time," Phillips emphasizes. "If you love your family, your community -- heck, if you love pit bulls -- do not breed your pit bull," Phillips states. During the 15-year period of 2005 to 2019, pit bulls killed 346 Americans. Over half of those deaths, 53%, involved killing a family member.

You can help spread the word by sharing this video or its Facebook counterpart on social media. Remember, pit bulls and their mixes only comprise 6 to 7% of the total U.S. dog population, but make of 50% of shelter dogs. Roughly one-third of the entire pit bull population is euthanized annually and is abundantly replenished each year by the backyard breeding of pit bulls. This is unheard of in any dog breed population. There is no other dog breed to make a comparison with. 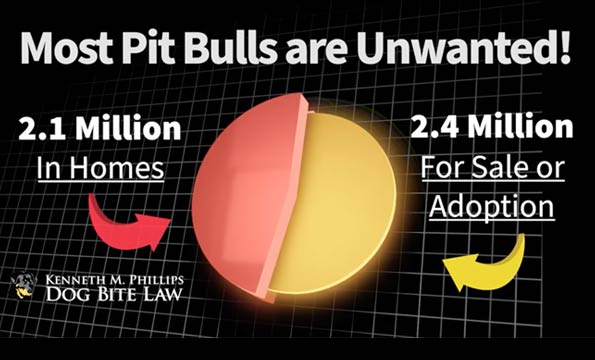 There are more unwanted pit bulls than pit bulls in homes. Screen in DogBiteLaw.com video.