Beverly Jean Dove, 60, was killed by dogs while staying at an assisted living facility.

Sheriff's Press Release
Washington County, FL - The Washington County sheriff's office issue a press release Friday afternoon for a fatal dog mauling that occurred on Tuesday, March 3, near Chipley. A female resident of Home Sweet Home, an assisted living facility, was discovered badly injured about 4:00 pm. She was transported to a local hospital where she later died of her injuries. Investigators believe a pack of five dogs living on the property of the group home inflicted the attack.

A person who knows the victim identified her as Jean Dove on a Facebook post earlier today. Her obituary states that she was 60-years old. Also on March 3, the national story of 92-year old Norma Graves went viral. Graves was a resident at the Village Green Alzheimer's Care Home in Tomball, Texas. The facility "rescued" a pit bull and allowed it to roam the halls and rooms unrestrained. Surveillance video shows the pit bull viciously attacking Graves in the face.

The Texas case has resulted in a massive lawsuit that is just getting started. By the time that lawsuit is finished, the facility will be bankrupt and out of business. The "rescued pit bull" living in the Alzheimer's care home had bitten Graves in the past, along with another resident, and the facility allegedly tried to hide this. The Washington County case appears nearly as egregious, involving a pack of dogs living on the property of an assisted living facility. What could go wrong?

Washington County Sheriff’s Office responded to a 911 call in reference to a dog attack just after 4 p.m., Tuesday afternoon. Upon arrival, deputies found the victim severely injured on the side yard of an adjoining property.

EMS responded to the scene and transported the victim to a local hospital, where she later succumbed to her injuries.

The investigation, still in its early stages, has led investigators to evidence indicating the five dogs responsible for this attack lived on the property of the group home. The dogs have since been removed from the property by the Washington County Animal Control.

“This investigation remains ongoing, and we are working diligently with the Department of Health and all other assisting agencies to ensure the future safety of the residents of this facility, as well as all other assisted living facilities within our county,” said Sheriff Crews." - Washington County Sheriff's Office

Home Sweet Home is located at 1613 Monroe Sheffield Road and is licensed as an assisted living facility to Fleda Bown. Our Google map calls to attention the intersecting Larry Brown Road. Within this triangle of bordering properties, multiple Brown relatives reside. Notably, the sheriff stated, "deputies found the victim severely injured on the side yard of an adjoining property" and that there is evidence "indicating the five dogs responsible for this attack lived on the property."

Online data shows that among these properties, 1619 lies between and is also known as Brown's Harbor House, which appears to be related. Thus, this area contains multiple properties, multiple Brown relatives and all of the assisted living residents as well. This is important because Pastor Larry Brown is now claiming the opposite of police findings. He claims the attacking dogs are stray (with unknown owners) or feral and have no association to the Home Sweet Home property.

Sheriff officials have not verified Brown's claim. Investigators will eventually determine the property lines, the ownership of the adjoining property(s) and the ownership of the attacking dogs. Certainly, it is a common excuse after a fatal dog mauling to claim the dogs were "strays" with unknown owners. In the state of Florida a dog "owner" means any person, firm, corporation, or organization possessing, harboring, keeping, or having control or custody of an animal.

Finally, in the U.S., "feral" dogs are domesticated dogs born in the wild (outside of human care) that have never been kept or owned by a human. Feral dogs are rarely, if ever, involved in fatal dog attacks. "Stray" dogs, on the other hand, are domesticated dogs born and kept by humans that are roaming or have been abandoned. Stray dogs have been involved in numerous fatal dog maulings, particularly in the instances of owned dogs that are un-collared and roaming. 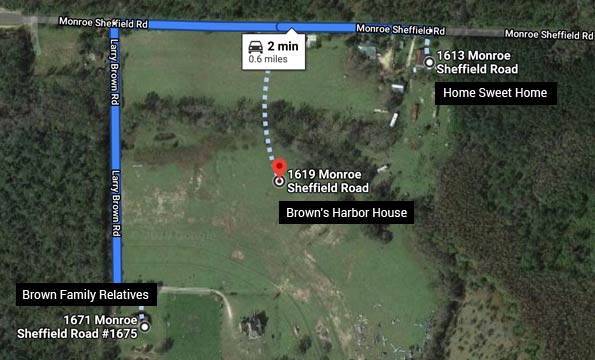 Multiple properties, where multiple relatives live, are near the assisted living facility in question.

Baseline reporting requirements:
Law enforcement departments across the United States should release consistent "baseline" information to the media and the public after each fatal dog mauling, including these items.
Tweet
Share14
Tweet
Share14
Donate Now