Harvey Harmon Jr., 76-years old, was killed by a pack of dogs in central Mississippi.

Man Killed by Dogs
Attala County, MS - A man is dead after being mauled to death by a pack of dogs, Attala County Sheriff Tim Nail confirmed today. The attack occurred last Thursday at a home on Highway 14 West, in the Palestine community near Kosciusko. Four dogs were involved in the deadly attack, according to Nail, and were at the scene when deputies arrived. Two dogs belonged to a relative of Harmon, who also lived with him. The other two dogs were strays known to stay in the area.

The owner of the dogs agreed to put the dogs down, reports Breezy News. A veterinarian at the scene euthanized three of the dogs, the fourth dog escaped. No other information has been released. A discussion on the Facebook group, What's Happening in Kosciusko and Attala County Mississippi, says the dogs involved in the attack were pit bulls. We were first alerted to the group late last night. The nearby city of Kosciusko recently repealed their breed-specific ordinance.

At the time of the attack, Harmon was in his front yard, reports the Clarion Ledger. The attack occurred about 10 am on January 30, according to Attala County Coroner Sam Bell. Harmon appeared to be have been dragged from his wheelchair by the four dogs, Bell told the Ledger. Harmon died at the scene of "blunt force trauma due to a pit bull attack." The owner of the dogs, Harmon's nephew, lived with Harmon and, to his knowledge, the attack was unprovoked.

It's hard to imagine, you live for 76-years, and in an instance like that you die from a dog attack that. I am sure was very horrifying. - Sheriff Tim Nail

WLBT spoke to Sheriff Tim Nail. The two stray dogs are now being characterized as mixed-breeds. When deputies arrived at the scene, Harmon was discovered dead on the ground. There had been no previous complaints about the dogs. The two pit bulls, belonging to Harmon's nephew, were euthanized at the scene, along with one of the strays -- the other stray fled and has not been found. Nail said that no charges have been filed, but the case is still under investigation.

The Star-Herald reported new details as well, including that the two pit bulls had been chained prior to the attack. Harmon was found deceased near one chained pit bull; the other had broken free from its chain. The two stray mixed-breeds were present nearby. "[Harmon] just might not have been able to fight them off," Nail said. "According to the owner, they weren't aggressive dogs, but clearly, they were aggressive that day," Nail said. The nephew has not been named.

Dog attack studies measure different data. We attempt to collect 33 parameters for each fatal dog attack victim, including if the dog was chained "during" the attack. One piece published in 1987 measured if a dog broke restraint to attack. Of pit bull attacks, 14% (20 of 143) involved breaking restraint to initiate the attack, versus only 0.7% (1 of 135) of all other breeds. Thus, pit bulls were 14 times more likely to break restraint to initiate an attack than all other dog breeds combined. 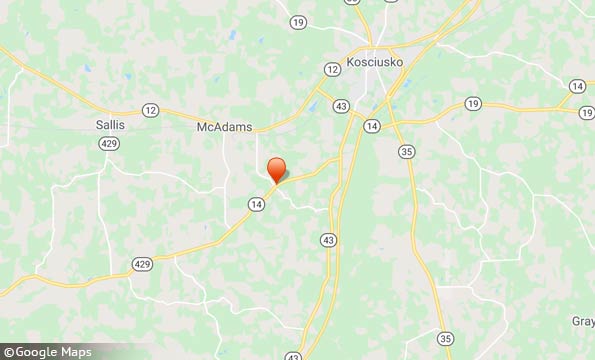 The attack occurred on Highway 14 West between Sallis and Kosciusko in Attala County.

Baseline reporting requirements:
Law enforcement departments across the United States should release consistent "baseline" information to the media and the public after each fatal dog mauling, including these items.
Tweet
Share920
Tweet
Share920
Donate Now