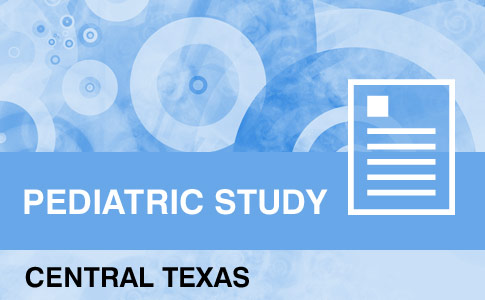 A summary of a recent Central Texas pediatric study about dog bite injuries.

View Abstract
Temple, TX - Last fall, the Journal of Pediatric Surgery accepted a study from researchers at Texas A&M University Health Science Center in Temple, Texas. The study was recently assigned to the journal's July 2019 volume. We summarize this powerful study in advance, as critical elements stand out: the number of cases where parental presence was reported (43.6%) and a sudden reversal of gender among pediatric dog bite patients; 57% were girls in this series.

Also last fall, we published two tables summarizing Level 1 trauma center studies characterizing dog bite injuries across major U.S. geographical regions from 2011 to 2018. The majority of them show that pit bulls are inflicting a higher prevalence and severity of injuries than other breeds of dogs. The Central Texas study reports similar findings and echoes results from the pediatric Level 1 trauma center study in Phoenix (Garvey et al., 2015) published by the same surgery journal.

Both pediatric studies report similarities in injury circumstances, the patient's relationship to the dog and that pit bulls accounted for the most severe injuries. In Garvey, pit bulls were responsible in 45.5% of cases with the highest AIS of 3-5 (Abbreviated Injury Scale) and inflicted 38% of all head, neck or face bites. In the Central Texas study, pit bulls were the most frequently identified breed, 36.2%, and were also the "most commonly identified breed to have caused major injury."

Results: One-hundred and two patients met the inclusion criteria. The mean age was 5.84 years, and 43.1% were preschool-aged (2–5 years). Parental presence was reported in 43.6% of cases, and most attacks occurred in the evening (46.8%). Injuries often involved the head-neck region (92.1%), and 72.5% were of major severity. Pet dogs were responsible for 42% of injuries, and pit bull was the most-identified breed (36.2%). Most injuries occurred while the child was at home (57.8%) and was petting or playing with the dog (28.4%). Intervention in the operating room was required in 34.3% of patients. Major injury was more likely to require operative intervention (p = 0.015) but was not associated with patient age, sex, pet status, or the need for hospitalization.

A retrospective review of the pediatric trauma registry was conducted for this study. Patients who were treated at [blinded] emergency department in Texas from October 2011 to October 2016 after sustaining a dog bite injury were evaluated. Inclusion criteria were persons ≤ 18-years old who sustained a dog bite injury and were presented to the emergency department directly or as a transfer from a regional center for continued care. 102 patients met these inclusion criteria.

In contrast to years of pediatric studies -- both large-scale and small -- showing that boys are the most predominant dog bite victims, the Central Texas study showed that 57% of patients were girls. (We saw a similar sudden gender reversal in our 2018 dog bite fatality report. For the first time ever, among ages 0-9, girls were the most predominant, 80%, 12 of 15 victims). The Garvey study also cites a 2013 facial fracture study of 17 patients where girls were the majority, 53%.

At least two other pediatric dog bite injury studies (from 1998 and 2000) showed that evening hours accounted for the majority of injuries.1

Though some of these findings are known from previous studies, they are extremely significant. The majority of patients were familiar with the dog, 57.8% of injuries occurred while the child was at home, a parent was present in 43.6% of cases, 92.1% of cases involved injuries to the head-neck region and winter months accounted for 29.4% of injuries. Recall that National Dog Bite Prevention Week, which signals the start of the traditional dog bite season, is held in mid April.2

72.5% of patients suffered "major injury," a classification based on the likelihood of operative intervention or that an impairment of physical abilities would occur. Included in these injuries were 6 cases of craniofacial fractures (a high rate, 5.9%, and comparable only to the 2015 Garvey study, which had a 4.6% facial fracture rate) and 2 cases of major vascular injury.3 There were no fatalities in the Central Texas study, and injury severity was not associated to the patient's gender.

A total of 80 dogs were identified by breed in 75 encounters, 73.5% of cases. Pit bulls inflicted the highest prevalence of injuries, 36.2%, over 3 times more than the next breed, Labrador retrievers, inflicting 10%. Pit bulls were also the most frequently identified breed in causing major injury. Pet dog(s) from the child's immediate family was responsible in 41.4% of cases. Nonpet dog(s) belonging to a relative, 19.2%, or a friend, 17.2%, made up the majority of the remaining cases.

The Central Texas study shows that about 60% of cases involved family dogs belonging to the child's immediate and extended family.

The discussion portion of the Central Texas study focuses in part on two frequent scenarios that result in attacks. In the first scenario, dog owners mistakenly "assume their dogs can be trusted in all circumstances." In the second scenario, parents are not closely monitoring benign interactions, particularly during the evening hours, such as a child playing with or petting a dog, which was the most common injury scenario in this study, 28.4%, followed by "no initiated interaction," 13.7%.4

"Familiarity with a dog should not be considered a preventative measure," states the Central Texas study, "as most victims are familiar with the attacking dog." A shared finding of the 2015 Garvey study, which stated that, "dog familiarity did not confer safety." In both studies, pit bulls were also singled out for requiring the longest hospital stays.5 The Central Texas study calls on "vigilant adult supervision, and a zero-tolerance policy," as an injury prevention recommendation.

Lastly, because the Central Texas study was blinded, authors could not determine the rate of pit bull attacks based on prevalence. The Garvey study, however, could. Phoenix Children's Hospital is located in Maricopa County. Garvey cites a 2012 news report of county records showing that pit bulls accounted for 6.25% of the licensed dog population. Despite this, pit bulls accounted for 39% of all injuries, 45.5% of cases with the highest AIS and 38% of all head, neck or face bites.6

Morbidity of Pediatric Dog Bites: A Case Series at a Level One Pediatric Trauma Center

Of 650 dog bite incidents, 282 met the criteria for inclusion in the trauma database. Median age was 5 years (range, 2 months to 17 years) and 55% (154/282) of patients were male. Pit bulls were most frequently responsible, accounting for 39% (83/213) of incidents in which dog breed was documented. Fifty-three percent (150/282) of dogs belonged to the patient's immediate or extended family...

Dog familiarity did not confer safety, and in this series, pit bulls were most frequently responsible. These findings have great relevance for child safety.

Our nonprofit will continue to monitor pediatric dog bite injury studies from regions across the U.S. The Central Texas and Garvey studies (south and southwest regions) point to family dogs as the primary attackers of children, as do other pediatric studies dating back to 2002.7 Both also note an elevated attack rate in the month of December. The gender role reversal in the Central Texas study of 57% girls is the first we have seen in a pediatric study population of 100 or more.

What should alarm dog-owning parents is that parental presence was reported in 43.6% of cases. Nearly 60% of the attacks occurred in the child's home and 46.8% occurred during the evening. Further, "Medium- to large-sized dog breeds, particularly pit bulls, can cause significant injury to the head and neck region, necessitating medical care at a specialized center, and should not be under the responsibility of amateur or irresponsible owners," the Central Texas study concludes. 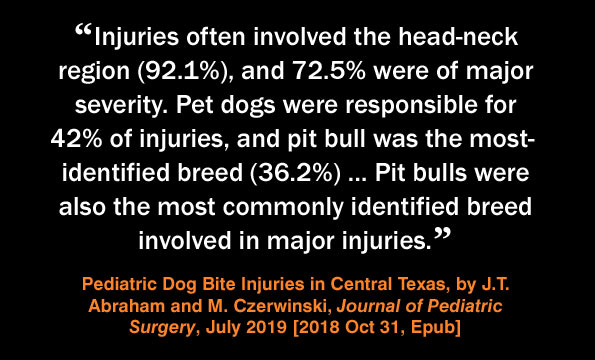 1Evening hours accounting for the majority of injuries was also reported in (Bernardo et al., 2000) 54% and (Bernardo et al., 1998) 41%. A period when parental supervision may be lowered due to household activities, making dinner and more. Unfortunately, this has been documented in research for two decades now and the Central Texas study still shows similar findings. During (Bernardo et al., 2000), pit bulls were the most common breed identified with only 19%. The Central Texas study shows a near doubling of this percentage since.
2In Garvey, the most common months of injury were July and November, during which 24% of injuries occurred. August and December followed, during which 20% of injuries occurred. In our nonprofit's research of fatal dog maulings over the last 14 years (2005 through 2018, which combines children and adult age groups), May and November are the most common months (21% of deaths), followed by August and December (20% of deaths).
3Pediatric studies often report a facial fracture rate of 1 to 1.5%, including (Saadi et al., 2018), a large-scale study.
4Circumstances of injury were known in 74 of 102 cases. The percentages provided (as well as the 28.4% stated in the abstract), reflect a comparison to the overall 102 patients. So 28.4% (29 of 102) of cases involved the child playing with or petting the dog, and 13.7% (14 of 102) of cases involved "no initiated interaction."
5Within the "major injury" section, the Central Texas study states, "Two patients required monitoring in the intensive care unit (lengths of stay: 1 day and 3 days) after sustaining major injuries at home by pet pit bulls." The longest stay in the Garvey study was 25 days after a boy was attacked by a pit bull. Garvey also reports, "The high incidence of operation, fractures, and external genitalia wounds raise the possibility of increased severity of injury in our region compared to others. It may also relate to the high percentage of pit bull involvement in this cohort."
6 The Garvey study examined 282 dog bite patients evaluated at Phoenix Children's Hospital from October 1, 2007 to December 31, 2013. The authors cite a news article, "Dog Registration in Maricopa County. Dog Licenses by Zip Code," published by AZ Central in 2012 for their data. The study states, "In 2008, there were 122,017 licensed dogs in Maricopa County, the most populous county in Arizona. Pit bulls accounted for 6.25% (7,632/122,017) of the licensed dog population, only the seventh most popular breed. Labrador retrievers were the most popular breed accounting for 25.7% (31,377/122,017) followed by German shepherds at 13.8% (16,881/122,017)."
7In (Kaye et al. 2009) 69% of cases involved dogs known to the injured children. "This suggests that familiarity with a dog is not a safeguard against an attack," states the study. Kaye cites a 2002 pediatric study with similar findings.