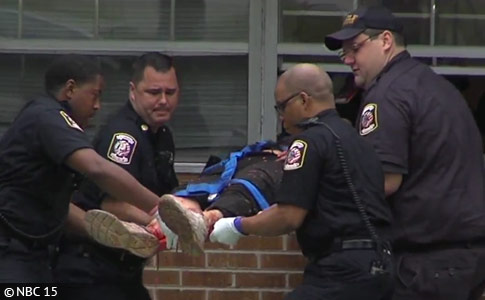 First responders rescue a woman after she was attacked by her own pit bull.

Raw News Footage
Mobile, AL - In a dramatic "owner attack" inflicted by a family pit bull, raw news video shows Mobile Fire and Rescue pulling a 51-year old woman out of a window of her home in the 4300 block of Government Blvd. Both of her hands were paritally severed in the attack. The 38-minute footage by NBC 15 shows the woman being hoisted through a window onto a gurney (8:30). First responders quickly wrap yellow plastic over her body once she is placed onto the gurney.

Animal control appears on scene next to a haul off the animal. A male pit bull with blood on its coat is seen being taken from the home by a catchpole (19:00). WKRG footage captures police boarding up the window afterward -- first responders had to break the window to rescue the woman. A person close to the family said the pit bull belonged to the woman. The dog also had a history of dog aggression, the person said. There were three dogs in the victim's household.

In the news report released by NBC 15, they state that first responders first pried open the front door, but the attacking pit bull was still inside. So they yelled out to the woman and discovered which room she was in then quickly broke the nearest window to reach her. The "window rescue" was necessary because apparently shooting the dog was not an option and, of course, animal control could not arrive in time -- nor can any department respond as quickly as police and fire.

A commenter on the NBC 15 Facebook thread claims he lived "next-door to that dog for two years" and that the dog had previously attacked the victim. The dog "should've been put down eight months ago when it attacked her the first time when she needed 200 stitches." Ken Dombroski Jr., goes on to say the pit bull also charged his dog, a pit bull-mix named Rufus. The victim's sister told NBC 15 she got the dog two years ago and "has no clue what happened." 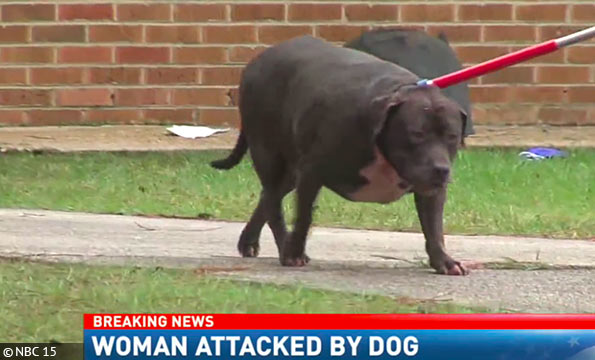 A neutered family pit bull was taken into custody after attacking its owner in Mobile, Alabama.

So far this year, pit bulls have inflicted six deadly "owner attacks." Of the 22 fatal pit bull attacks since January, 68% (15) involved a pit bull killing a family member. There have been many high profile nonfatal "owner attacks" by pit bulls involving dramatic rescues as well. In September, firefighters in Springfield, Ohio had to climb through a window to rescue Kathy Engle, 51, and a 4-year old child she was babysitting from Engle's own attacking pit bull, which had a bite history.

Also in September, a Des Moines police officer sped onto a woman's front lawn and shot the pit bull attacking her. Sandra Riggan, 49, was moving out of her home with the help of two movers, when her own pit bull suddenly attacked her. "I thought I was going to see her die in front of me today," said her friend Pamela Dishman, who witnessed the attack. "It was horrible. I mean, I'm watching my friend and she's being attacked, almost killed it seems like," Dishman said.

Riggan later posted graphic photographs of her injuries on her Facebook page and her GoFundMe page, where not a single donation was ever left. In a September 8 post -- one day after the violent attack -- Riggan stated in a Facebook post showing a photo of her three pit bulls, I "still love my dogs." In a September 22 post, Riggan claims the attack was redirected aggression. The male pit bull was actually after the movers, but attacked her instead because he could not reach them.

"He stopped attacking as long as I was letting him try to get in the house at those movers." - Sandra Riggan, Facebook, September 22, 2018

In August, firefighters in West Palm Beach had to climb through a second story window to rescue two people after their pit bull attacked them. Neighbors told CBS 12 the owners knew the dog was vicious. There was even a Beware of Dog sign on their door. The pit bull apparently "barricaded" its owners upstairs after the attack, forcing firefighters to enter through the window. That is your tax dollars at work, saving pit bull owners from their own dogs with a known history of aggression.

In July, police in Taylor Mill, Kentucky carried out the dramatic rescue of two pit bull owners. When police arrived the family pit bull was actively attacking one of its owners in the backyard, while its owner moaned, "Shoot it please." The officer open fired on the dog. "On more shot," the officer shouted. "He's still breathing, put him out of his misery." When police stepped into the home, it looked like the scene of a massacre with blood on the floor, furniture and up and down the walls.

Family members said the 4-year old pit bull, named Rocky, did not have a history of aggression. The injured owner lying in the backyard, who was "bleeding out everywhere" and required an ambulance, "ASAP," according to police officers at the scene, uttered to the officers, "That dog, he's been good forever. And thank you for killing him." All-in-all, Rocky the "good" family pit bull, viciously attacked two family members, sending both of them to the hospital with serious injuries.

Though details in the most recent dramatic "owner attack" by a pit bull in Mobile, Alabama remain light, there is evidence the pit bull was dog-aggressive, yet was living in a home with two other dogs. The victim's partially severed hand injuries are also indicative of trying to break up a dog fight involving a pit bull. The naïve saying, "It could never happen to me" or worse, "It could never happen to me again," routinely leads to severe and fatal bite injuries to owners of pit bulls.

Six days after the "owner attack" in Mobile, a neighbor started a GoFundMe page for the victim and identified her as Bambi Reynolds Morrow. At least one hand had to be amputated in the days following the attack. Both of her arms, hands and one leg were severely injured in the attack. 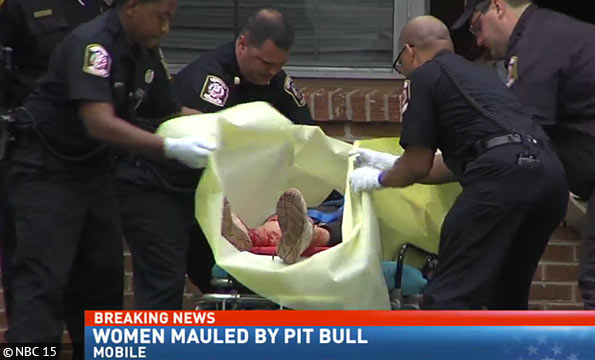 Mobile Fire & Rescue pull a woman through a window after she was attacked by her pit bull.