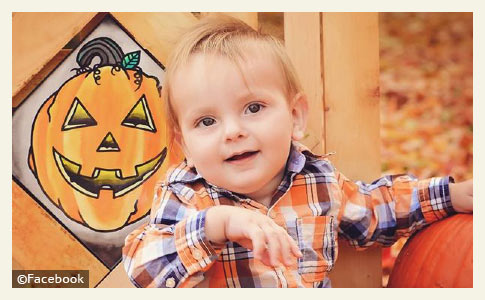 The obituary of Carter Hartle, 11-months old, was published on November 19.

Dog Euthanized
UPDATE 11/17/15: The dog involved in the death of an 11-month old boy has been euthanized, according to officials. Verona dog warden Susan Gardinier said that Diesel, identified as a 2-year old pit bull-shar pei mix,1 was put down today at the veterinarian in Wampsville. On Sunday night, the dog fatally attacked Lisa Cittadino's baby while the animal was in the living room playing with three of the baby's sisters, ages 7, 10 and 12. All three sisters witnessed the horrific attack.

The investigation into his death is still ongoing, but police do not anticipate filing any criminal charges, according to investigators. The Onondaga County Medical Examiner's officer will conduct an autopsy on the little boy. Currently, the baby is still only known as Baby Carter, without a last name. A co-worker of Cittadino, Jennifer Girard, started a GoFundMe page to help the family with medical expenses and funeral costs. The family has also been offered counseling services.

11/16/15: Family Pit Bull Kills Baby
Oneida County, NY - A family pit bull attacked and killed an 11-month old boy in the town of Marshall last night, according to the Oneida County Sheriff's Office. The dog, a 2-year old pit bull named "Diesel," was with the baby and three other children in the home when the family pit bull suddenly attacked the boy. Responding deputies found 32-year old Lisa Cittadino trying to give the child first aid. Cittadino said she struggled to pull the family pet off the baby then called 911.

The baby died due to facial and neck injuries, according to deputies.

Syracuse.com reports the ages of Cittadino's other children, all daughters, are 7, 10 and 12. At the time of the attack, all four were playing with the family pit bull in the living room. Cittadino turned her back momentarily then heard screams from her baby boy and her daughters. When she saw the dog attacking her son, she frantically tried to get the animal to release its grip. Cittadino told deputies the family pit bull has never been aggressive since joining the family 2-years ago.

The still unnamed baby was transported to St. Elizabeth Hospital in Utica, where he died. The pit bull was taken into custody by the town of Verona animal control officer and will be euthanized at Cittadino's request. WKTV stated in their update that the family told the sheriff's office they had raised the 2-year old pit bull from a puppy. A press conference is expected later this afternoon. Also, the jurisdiction of the family's home is being reported as both Marshall and Deansboro.

In an afternoon update, Syracuse.com spoke to Susan Gardinier, the Verona animal control officer. Gardinier was called out to the scene because the town of Marshall dog warden "didn't want to deal with the dangerous dog," states the article. Gardinier told the news group the same thing that appellate courts have ruled about the breed for 25-years. Pit bulls are in part more dangerous than other dog breeds due to their tenacity, their refusal to terminate an attack once it has begun.

"The thing about pit bulls is if things go wrong, they go very, very wrong. If one attacks, it's very hard to get them to stop. They are bred to latch on, to hang on, and that's what they do." - Susan Gardinier, Verona animal control

The candid voice of Gardinier is not one we hear too often at DogsBite.org. She even added, "It's very difficult to get them to release whatever they've latched onto, much more so than say with a German shepherd." The "hold and shake" bite style of the pit bull, combined with their refusal to terminate an attack once it has begun, is primarily why the breed shows up so disproportionately in fatal attacks. Pit bulls were also selectively bred for explosive, unpredictable aggression. 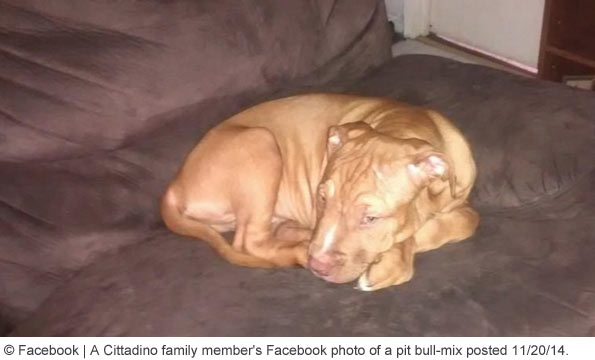 View the DogsBite.org Google State Map: New York Fatal Pit Bull Attacks.
1The photograph from a family member's Facebook page posted a year ago (November 20, 2014) shows a pit bull-shar pei mix at about 1-year in age. Color and size descriptions were not provided in any media reports.