Help Find Nurse Laura
Albuquerque, NM - On March 19, 2014, DogsBite.org released the 30-year anniversary video of an historic pit bull attack victim. On that day 30-years ago, 9-year old Angela Hands suffered a life-threatening attack by four pit bulls. Her injuries were daunting, including her lower right leg gnawed to the bone and extensive flesh and muscle ripped away from her upper arms. At that time, doctors estimated she would require future surgeries until she reached the age of 35.

The attack was initiated by two younger pit bulls. The two parent pit bulls then scaled a 6-foot fence and joined the destructive, sustained attack.

Less than 2-months after the horrific attack her small semi-rural community, the Village of Tijeras, enacted one of the first modern pit bull bans. The ordinance remains intact today. The 1984 Tijeras pit bull ban was soon challenged by a group of pit bull breeders. In 1988, the Court of Appeals of New Mexico upheld the constitutionality of the ban. This pivotal legal victory helped provide the legal framework for the Denver and Miami-Dade county pit bull bans that were enacted in 1989.

In the weeks following our release of the anniversary video, Angela contacted us. She said that on the 30th year anniversary, she celebrated by taking a 30-mile bike ride, "because I can," she wrote in an email. In a recent piece by KOB 4, Angela shares her powerful history and how she is now trying to locate the "Fabulous Five," she calls them. The doctors and nurses from the University of New Mexico Burn and Trauma Center (UNM) who saved her life and her right leg that March day.

"I had to find them," she said. "I had to at least reach out and say, 'thank you for being amazing.'" Angela has so far located four of the Fabulous Five. She continues to search for nurse Laura who called her Angie-boo and left sweet notes for her. KOB 4 discovered Angela's pursuit after seeing her Craigslist posting. Back in May, Angela posted an emotional appeal in the Community > Lost & Found section of Albuquerque Craigslist. "Please find my nurse! LAURA," is the subject line.

Please please please God, and CL help me find my nurse from the BCMC hospital in 1984.2 I was mauled by Pit Bulls on March 19th, 1984, and this woman was amazing to me. Her name is Laura. Sadly, that's all I know of her. I have posted her picture in hopes that someone recognizes her. She was my angel when I was a child, and she used to call me Angie Boo. Please share this pic on FB if you want, I am in desperate need. My heart has missed her all these years, and it would be such a gift to find her. If you repost this pic, please tag me, my name is Angela Moroco. Thanks a million. - Angela Moroco (formerly Angela Hands)

Angela is now 41-years old and lives in the Seattle-area. In the Skype interview, Angela shows how some of her daunting injuries appear today. "I have scars that will never heal," she said, "I see them everyday."  She desperately hopes to find nurse Laura, appealing directly to her, she says, "You have formed me into a very stable and confident woman and I owe a lot of that to you." So far nurse Laura has not been located, but we believe the KOB 4 segment will make this possible.

Angela did locate nurse Shelby who treated her on the medevac helicopter en route to the trauma center. She reconnected with Shelby 31-years after the attack, which also fell on Angela's 41st birthday. The two picked up right where they left off. "We did not miss a beat," she said. She also reconnected with her chief surgeon, Dr. Demerast. He received word that Angela called while working with Doctors Without Borders in another country. Demerast called as soon as he could.

Also part of the Fabulous Five is Betty Garcia who was her longtime babysitter before the devastating pit bull attack. Angela said she was at her bedside at the hospital every day. She was discharged from the trauma center 38 days after arrival, facing years of rehabilitation and future reconstructive procedures. Betty is married to Felix Garcia, who was the mayor of the village at that time and the driving force behind the pit bull ban. Garcia is currently a city council member.

The last member of the Fabulous Five is nurse Loretta who was Angie's general pediatric nurse. She never mentioned anything about the attack, Angela said. "She always talked to me about my future," she said, "like I was just a regular kid, but that I was going to do amazing things." When Angela recently reconnected with Loretta she was surprised to learn that she is now a practicing attorney in Albuquerque. Attorney Loretta is also trying to help Angela locate nurse Laura.

The Fabulous Five were an extension of Angela's mother, Donna Hands, who she calls, "her rock." Donna is seen sitting next to Angela in the anniversary video with Barbara Walter's voice in the background, gasping at how many more years of surgery lay ahead. Not only did her mother lovingly care for and oversee her daughters' lengthily recovery, she had to ensure her needs as a young adult would be met by filing the difficult claim against the relative who owned the pit bulls.

Donna also became part of the national debate about pit bulls. She fielded many calls after the 20/20 segment aired in the winter of 1986. Angela said she turned down the Oprah Winfrey Show, which debuted in late 1986, because it was so new and her mother wanted to stick to a hard news format. Notably, pit bull breeder Margaret Amacker,3 who challenged the Tijeras ban, sent Donna a $500 check while Angela was hospitalized. Her mother ripped it up and sent it back, she said.

"Have we sunk so low that the dogs' rights are more important than a child's right to go play in their yard?" -Donna Hands, December 19854

Last year, when we first spoke to Angela, she described a photograph taken just before she left the trauma center -- it was her exit day. She said that everyone who helped her at the hospital all gathered outside in front of the medevac helicopter, the same one that airlifted her out of Tijeras on March 19. We count nearly 80 doctors, nurses and other staff members. There are few words to express how mighty this photograph is and with brave little Angie standing front and center.

This is how many people it took to save her life. Please think about this each time you read about a new child being airlifted to a trauma center after a damaging pit bull attack. 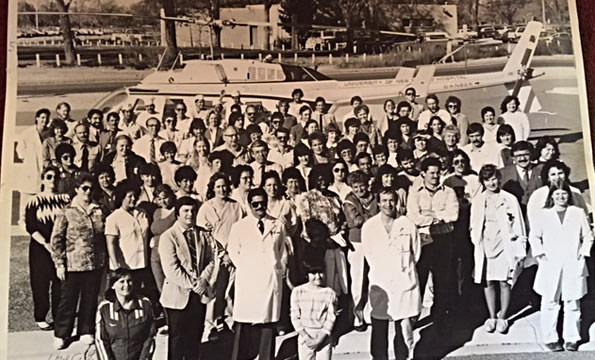 Angela said that a few weeks after she left the trauma center this helicopter crashed killing all members on board. She and her family were devastated. Nurse Shelby was not on the flight.

This is a present day photograph of Angela Moroco seen with her two beloved chocolate labs, Baze and Casey, in Seattle. She changed her last name some years ago. Anyone who recognizes or has any information of the whereabouts of nurse Laura is urged to contact Angela Moroco on Facebook. Without her amazing mother, the love and support of her family and the Fabulous Five, "I literally would not be here today," Angela said.
1Some of the hospital photographs are Polaroids. The pit bull problem is nearly as old as the classic Polaroid OneStep SX-70 Rainbow Stripe camera, released in 1977. See the pit bull leakage period (1975 to 1979).
2BCMC, Bernalillo County Medical Center, was later renamed to UNM, University of New Mexico hospitals.
3,4A Breed Apart: Pit bulls Have Killed 12 People Since 1982, by Fred Bayles, Associated Press, Syracuse Herald-Journal, December 31, 1985.