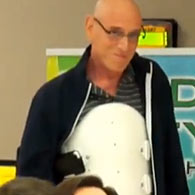 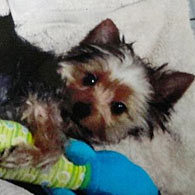 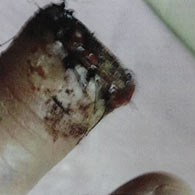 Stephen, his partner Rusty, their dog Vargas and Stephen's finger.

Video: Neighborhood Council Meeting
Studio City, CA - Pit bull attack victims, Stephen Elliott and Rusty Fox, continue to try to work with City of Los Angeles officials to address the growing public safety problem posed by pit bulls and other dangerous dogs. Writer Mike Szymanski recently published an account of the violent attack that occurred on Ventura Boulevard on February 16. As a result of the attack, Stephen had part of his finger bitten off as he tried in vain to save his dog Vargas from the jaws of a loose pit bull.

"This was the worst experience of my life. I don’t want this to happen to anyone ever again, and we want to educate people about these dangers." - Stephen Elliott

The below is a recent letter to Studio City Field Deputy, Courtney Hamilton, who works in the North Hollywood Field Office of Councilman Paul Krekorian. Stephen's letter painstakingly details how appallingly victims of dog attacks are treated by the system afterward -- this case specifically involves a dog-on-dog attack resulting in serious injury to the person and the death of their pet -- and how the system fails to hold the owner of the dog and its animal accountable in any way.

Discussion notes by DogsBite about the highlighted portions are located at the end of this post.

It was a pleasure meeting you and Councilman Krekorian at the Studio City Neighborhood Council meeting on Wednesday evening. First let me apologize for the ambush at the door, but we were eager to make the City Council aware of the safety issue around pit bulls and have been unsuccessful at finding a responsive channel. As I promised, below is a summary of our experiences and an outline of what we are hoping to accomplish in terms of advancing public safety.

On Sunday, February 16, 2014, at around 12:30 PM, we were walking Vargas, our 6-and-a-half month old Yorkie, on the 12000 Block of Ventura Blvd. As we approached the Big Sugar Bakery (12182 Ventura Blvd.), a pit bull came bounding out of Lush Shoes (12188 Ventura Blvd.) and attacked Vargas. This attack was totally without provocation and occurred without any warning. The pit bull exhibited a strong fighting instinct and in our attempts to rescue Vargas, my partner Howard (aka "Rusty"), who was 5-and-a-half weeks post-surgical from an extensive spine surgery, was knocked down onto the street curb, and I had part of my right middle finger bitten off. Vargas' injuries were extensive and exploratory surgery determined that his condition necessitated that he be put down. Although we did recover the severed portion of my finger, the attempt to graft it back on failed and I had to have a formal amputation and finger shortening surgery on March 5th.

The police were called, but by the time they arrived we were on our way to The Studio City Animal Hospital. Immediately upon delivering Vargas to the hospital, I went to the ER at St. Joseph's Hospital; Rusty remained with Vargas. Rusty spoke briefly with the Police and Animal Services by phone. A report was filed by Animal Services. To date, we have not been able to secure a copy of this report, nor have we been able to ascertain any information about a hearing to determine the fate of the attacking pit bull. What we do know is that after a 10 day quarantine in the owner's apartment, the dog is now free to go back out into public spaces. A bystander/witness reported to the police that the pit bull had been muzzled a few minutes prior to attacking Vargas, and had, in fact lunged at another dog in front of Starbucks. We were told that the muzzle was removed at the request of the shoe store owner, as she wanted to play with the pit bull.1

Despite the fact that she was in violation of several City/County ordinances, the owner of the pit bull has not been issued any citations. Also, the owner of the pit bull has no form of liability insurance and has made no effort to reimburse us any of our expenses (which currently total almost $10,000.00). I mention the lack of financial resources and a sense of responsibility not because we are looking for assistance in recouping our expenses, but because it serves to demonstrate that there are deficiencies in current laws regarding the ownership of [dangerous] animals.

Problems We Have Encountered:2

Proposed Solutions to the Problems Posed by Pit Bulls:

This is a brief account of our experiences and what we hope to accomplish by working with the City of Los Angeles to address the growing public safety problem posed by pit bulls and other dangerous animals. Since we were attacked on February 16th, we have heard numerous accounts similar to ours -- some not as severe and some more so -- from fellow Angelinos. I cannot thank you and Councilman Krekorian enough for taking the time to consider our situation and our desire to be of service to our community. If either of you have any questions or require clarification on anything raised in this letter, please do not hesitate to contact us. And again, thank you for taking the time to listen to us at the Studio City Neighborhood Council Meeting. It was extremely meaningful to us to know that we have an ear in local government.

What happened to Stephen, Rusty and Vargas can happen to you and your beloved dog at any time and in just about any place, that includes walking down Ventura Boulevard. These attacks occur extremely suddenly and rapid-fire -- the pit bull bolts from its owner's door, snaps its chain, or in this case, charges out of a retail store. As you can see from Stephen's account, victims are often Shit Out of Luck legally and also blamed for the injuries inflicted by the loose attacking dog.

1Among many "fashionable" shoes, Lush also sells shoes that we imagine many pit bull owners would kill for.
2Some of the cited municipal code is Los Angeles County code instead of Los Angeles City code. Because the city failed to provide Stephen and Rusty with any information about their rights or future proceedings, they were forced to do research on their own. It is overwhelming to be an attack victim, much less having to also put on a legal hat that requires knowledge of city, county and state dog bite laws and how these laws intertwine.
3California has progressive civil and criminal dog laws compared to many other states. An overwhelming number of jurisdictions across the U.S. have no animal-on-animal attack laws at all. We have certainly heard from victims in other states that they have been told the same thing: "It is your fault you were injured; you intervened in a dog fight."