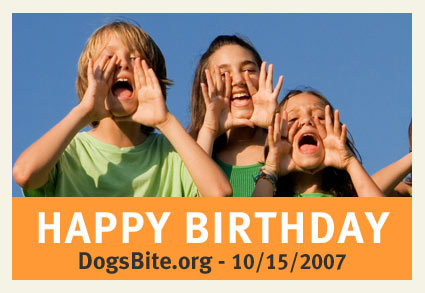 DogsBite.org - October 15, 2012 marks the fifth year that DogsBite.org has been operating on the World Wide Web, documenting statistics and providing resources to help prevent serious dog attacks. Our news comes on the heels of a press release issued for the upcoming October Tucson event: Walk for Victims of Pit Bulls and Other Dangerous Dogs. National dog bite victims' advocates, including founder Colleen Lynn and Anthony Solesky will be speaking at the event.

DogsBite.org hopes to see you in Tucson, Arizona on October 27!

A world of change has occurred since last October, starting in January when Animal People editor Merritt Clifton released a 30-year summary of Dog Attack Deaths and Maimings, U.S. & Canada. The report shows a great escalation in pit bull maulings in the past 10 years. Furthermore, 39% of pit bull attacks involving serious injury and death in the last 30 years have occurred since 2007 alone, when national animal groups ramped up their pit bull advocacy due to Michael Vick.

In April 2012, the highest court in Maryland set off a firestorm by declaring, "pit bulls are inherently dangerous" and attached strict liability when a pit bull attacks. DogsBite.org launched the Maryland Dog Bite Victims Advocacy web page and email alert list to help citizens and groups take action to support the Court's decision. After a failed attempt by Maryland legislators to override the Court's ruling in August, the Pit Bull Task Force is set to meet again on October 25.

Angels Are Among Us

DogsBite.org thanks our contributors and readers for helping us reach five-years old. We thank the many individuals who have started their own advocacy blogs and those who are speaking out in comments after horrific pit bull maulings. We thank the Facebook Pit Bull Regulation Project and all of its members. We thank Miss Universe Canada, Sahar Biniaz, for courageously calling for a provincial pit bull law and sharing her own story of being attacked by a family pit bull.

2012 marks an unforgettable year for raising awareness about victims of serious and fatal dog maulings. Many unforgettable moments have yet to be played out as well. These amazing moments will unfold in just over 10-days in the City of Tucson, Arizona at the first ever Walk Event for dog bite victims. To the local grassroots organizers of the event, Melissa "Mellie" Baze and Matthew Pimple, DogsBite.org and our readers send our warmest and heartfelt thanks.