Mother of Child Killed by Dog Sentenced to Probation by Judge 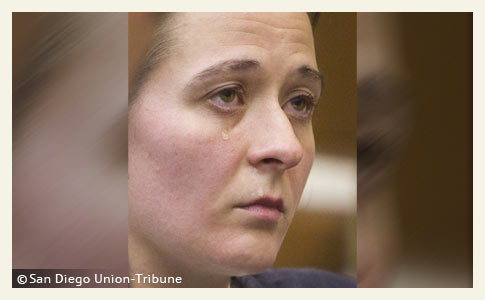 Valerie Grace Carlson, 30-years old, sentenced after the mauling death of her son.

Mother Sentenced archived
UPDATE 09/29/11: The mother of a 2-year old boy mauled to death by a dog while she was in a "drunken stupor" in her Tierrasanta home was sentenced to 5-years probation. Valerie Grace Carlson, 30, was also ordered by Judge Laura Halgren to complete a one-year jail term. Since her arrest back in April, combined with good behavior credits, she has already spent the equivalent of 313 days behind bars, leaving her with only a month more to of jail time to serve, reports 10 News.

Judge Halgren said that if she fails to complete probation, Carlson will be imprisoned for eight years for her "inexcusable conduct" on July 31, 2010. In June, Calson -- who has three other children -- pleaded guilty to four counts of child endangerment. One of those counts was in connection to the mauling death of her son, 2-year old Aaron Carlson. While the mother was drunk on a couch downstairs, Aaron was left alone to deal the dog that was "hyper" around children.

04/28/11: Mother Arrested archived
In an unusual development, authorities have arrested Valerie Carlson, 29, the mother of a toddler who was mauled to death by the family dog last July. At the time of the attack, the family had been living in Tierrasanta, a military housing area. The mother had been asleep on a couch downstairs, when the dog attacked Aaron Carlson in front of his three siblings upstairs. Carlson is facing five felony counts of cruelty to a child with possible injury or death and a prison sentence of 19 years.

San Diego police Detective Cindy Brady wrote in the declaration that the left side of the boy's face had been torn off and he had no skin in the middle of his face. The child's nose and cartilage were gone, the detective wrote.

The victim's three siblings were in the home at the time and their father was away on deployment, according to the detective.

According to the declaration, Valerie Carlson told detectives she had a friend visit her home the night before and drank four to five Jim Beam bourbon and Coke drinks, starting about 9:30 p.m.

Carlson said she normally put the dog, a German shepherd named Zeus, in a crate at night, but on that night didn't feel like it, according to the declaration. - CBS 8, May 5, 2011

08/01/10: Death Ruled an Accident archived
The San Diego County Medical Examiner's Office ruled the death of Aaron Carlson an accident. Police said the family dog, named Zeus, fatally attacked the young boy Saturday in a military housing complex while his three siblings were in the same room. According to police Lt. Rick O’Hanlon, no criminal charges are pending against the mother who was home during the event. An autopsy showed the boy died of bite injuries to his head and neck. The dog was put down.

It is important to point out that when fatal dog attacks occur on military base housing, the military greatly limits U.S. media access. In the most recent incident involving Aaron Carlson, reporter Doug Kolk states in an early video, "Because this occurred inside military housing, this is as far as we can get to the crime scene." The media has even less access when the incident actually occurs on base, such as the deaths of Julian Slack (2008) and Dandre Fisher (2007).

Despite this truth, pit bull defenders are already clamoring to call the mauling death of Aaron Carlson another "media conspiracy" against pit bulls by under reporting this fatal dog attack.

07/31/10: Child Killed by Family Dog
San Diego, CA - In a developing story, a 2-year old boy was mauled to death by a family dog in Tierrasanta, a military housing area within the City of San Diego. According to Police Department Sgt. Ray Battrick, the incident happened at 11:33 am at a home on Lofberg Street. The boy was attacked in front of his siblings in an upstairs bedroom, while the mother was sleeping on a couch downstairs. The father is an active serviceman and currently deployed overseas, Battrick said.

The family has owned the dog, a 1.5-year old German shepherd-mix, for about 6 months. 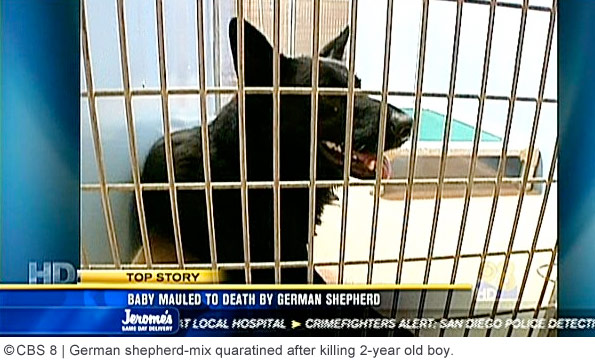