DogsBite.org - Carrie Pollare recently wrote an article titled, "Getting Bullish Against BSL," that was published by the Huffington Post. In the article, Pollare repeats the many pit bull distortions voiced by pro-pit bull groups. For instance, the real problem is "individual" vicious dogs and the "criminals" who create them. Pollare neglects to mention the many "nice" family pit bulls that violently attack, most recently, the two pit bulls that killed 10-year old Justin Clinton in Texas.

Pollare also neglects to mention the array of studies that show pit bulls as the primary instigators of severe and fatal attacks. She conveniently leaves out the U.S. justice system as well. Numerous State Supreme and Appeals Courts, the District of Columbia Court of Appeals and the U.S. Supreme Court have declared well written breed-specific legislation is constitutional. These rulings are based on the "genetic" attack traits of pit bulls and the danger they pose to the public.

These attack traits are inborn due to centuries of selecting for these traits, specifically for the purposes of dogfighting.

Pollare is also the creator of the, "I'm Tired of" campaign. She recently added the "I'm Tired of BSL" bracelet to the collection. Half of the sales of this bracelet go to Best Friends Animal Society's Stop BSL program. Best Friends hardly stops at opposing BSL, however. In the wake of Michael Vick, Best Friends has launched a nationwide campaign to "rehabilitate" pit bulls seized in dogfighting raids -- the most unstable pit bulls of all -- and turn them into household pets.

In response to Pollare's reckless campaign designed to stop municipalities from enacting pit bull ordinances,1 whereby causing more innocent citizens and beloved pets to be at risk of a violent pit bull attack, DogsBite.org would like to share what we are tired of. The pit bull problem is nearly 30 years old. In this time, countless people and pets have suffered disfiguring injury and death by these dogs. Due to Pollare and groups like Best Friends, these maulings will only continue.

What DogsBite.org is Tired of : 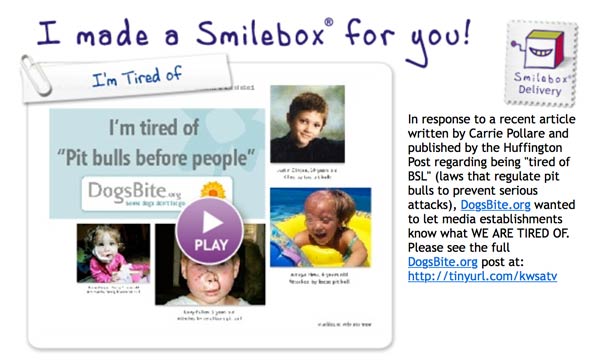 A Smilebox webcard reminding media establishments what our nonprofit is tired of.

Readers, please leave what you are "tired of" in the comments section.

Victims in the DogsBite.org web card, "I'm tired of Pit Bulls Before People," include: Justin Clinton, 10 yrs, (Leverett's Chapel, TX), Bianca Zangar-Darcey, 1 yrs, (Haverhill, MA), Larry Pullen, 5 yrs, (Ty Ty, GA) and Amaya Hess, 4 yrs, (Indianapolis, IN)
1As demonstrated by Pollare's bracelets, the term "BSL" is mainly used by pro-pit bull groups to confuse the public. Breed-Specific Laws were invented in the 1980s to address the "pit bull problem," and 99.9% of these laws target pit bulls. To call these laws what they really are, "Pit Bull Laws," would lower public support of pro-pit bull groups.
2It was reported in 2007 by Animal People that U.S. shelters killed about 1.4 million dogs per year. 750,000 of these dogs were pit bulls and their mixes.

31 thoughts on “I'm Tired of 'Pit Bulls Before People,' A Response to Carrie Pollare”