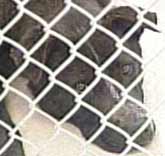 "It was the most brutal attack I've ever seen," Bev Greco, executive director of the Cumberland County SPCA, said.

Greco said one of the Chows that lived with several others in an adjacent house broke free and attacked the Akita. The owners of the Chows, Henry and Lattice Davis, who have five dogs in all, face serious charges including cruelty and neglect. The owner of the Akita could face abandonment charges.