While Preparing this Post, We were Informed that Rebel Died 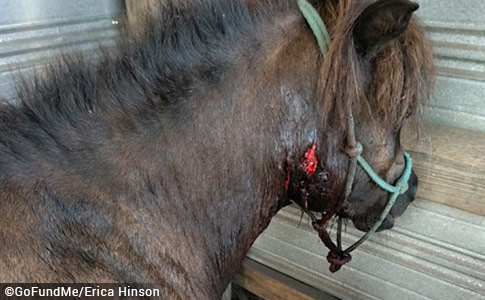 The pregnant mini horse, Chocolate, seen from one side of her stall after the dog attack.

Chocolate Died
UPDATE 08/27/22: We were informed on Saturday, August 27, that Chocolate, who was pregnant, was found dead in the family's pasture at about 5:00 pm. Both of the family's mini horses died due to injuries from the vicious dog attack on August 5. "Chocolate is dead, she was just found dead. Both of our horses are dead just thought I would inform you," Hinson wrote in. Rebel, the male mini, was discovered dead on August 26 after suffering extreme injuries to his genital area.

"Another Painful update, Chocolate, our sweet girl has passed away one day after Rebel. Both of my children’s pets were killed by this vicious pitbull attack any further funds received will be strictly for horse replacement or legal advice fees. Thank you all." - Erica Hinson, GoFundMe, August 27, 2022 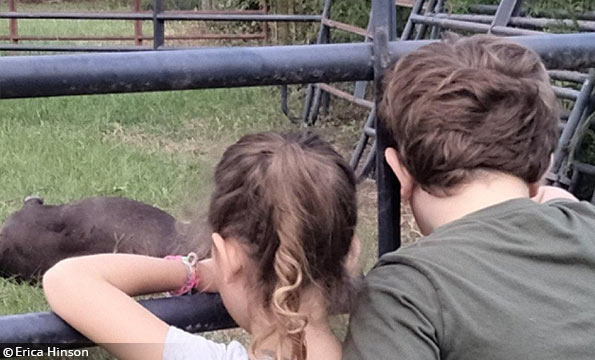 Chocolate, who survived nearly a month after a vicious dog attack, was found dead August 27.

08/26/22: GoFundMe for the Mini Horses
Bethune, SC - On August 20, Erica Hinson, the organizer of a fund supporting two mini horses attacked by a pit bull along with two other dogs, sent an email into our Press Alerts. The injuries inflicted by the dogs truly are "like something from a horror film." Rebel's mutilation injuries are shown in one photograph. Chocolate, who is pregnant and fighting for her life, suffered multiple deep lacerations to both sides of her neck, torn tendons and gashes to her abdomen and legs.

"On Friday, August 5, 2022, my Father’s miniature horses were viciously attacked by a neighbor’s pit bull along with their two other dogs. The injuries were like something from a horror film. The male stud, who’s name is Rebel, was mutilated in his genital area resulting in an emergency at home vet visit where he tragically lost a testicle. He is torn from where his leg meets his stomach all the way down to his private area, he has flesh tears to the neck, legs and nose as well. The female, named Chocolate, is pregnant & fighting for her life. She has a foot long, two inch deep laceration to her neck with torn tendons on one side of her neck on the other side she has two 6 inch long slashes to the neck along with gashes to the abdomen and legs, she is retaining fluid..." - GoFundMe/Erica Hinson

We asked Hinson several more questions and she responded. The vicious attack occurred in Bethune, a small town of less than 500 people in Kershaw County, South Carolina. Hinson's father is disabled. The primary attacker was a pit bull; two other dogs belonging to the same owner were also involved. The owner was fined $400 for owning a vicious animal, made to pay the emergency veterinary bill of roughly $720 and was ordered to rehome all three of the dogs in 30 days.

Hinson provided a detailed update about the condition of her mini horses. Both continue to suffer gravely from their injuries. Many more veterinary visits are expected. "Daily treatment consists of 15 minute wound wash per wound, followed by antibiotic spray. The vet did no stitching as the wounds are so open and missing meat in several areas," she wrote. "Antibiotics are administered by mouth daily along with pain medication, all these cost fall on my family," Hinson wrote.

On August 26, just before we published this post, Hinson told us, "Rebel was so strong but he was found dead this morning around 8:30 am."

Hinson's family also has to face the cold, hard reality of a civil case, which often requires waiting until all of the injuries have stabilized or healed before filing a lawsuit, "so that we could have an accurate number to present to the court system." In the meanwhile, her father and family have to pay all of the veterinary medical costs. "I don’t understand how so much of this is falling on my father while the dog owner is given a petty fine and only one emergency vet bill," Hinson wrote.

There were no media reports about this attack. Hinson hopes to spread the word of her GoFundMe on different social media platforms. She mentions Reddit, which is an excellent choice. We encourage readers to share Hinson's GoFundMe on your favorite social media platforms, especially with groups that are horse-related. Making a donation, however small, ensures that you will receive updates about Rebel and Chocolate, as well as developments in the civil case.

"Daily treatment consists of 15 minute wound wash per wound, followed by antibiotic spray. The vet did no stitching as the wounds are so open and missing meat in several areas. I will attach photos, they are graphic though I must warn you. The incident happened in Bethune, SC and the police agency in charge was Kershaw county law enforcement along with Kershaw county code enforcement. A citation was made to the dog owner and a hasty trial was held at the trial the dog owner was only fined 400 dollar for owning a vicious animal, made to pay the first vet bill which was roughly $720 dollars and told the dog must be rehomed within 30 days. My family was shocked as many more vet visits will be necessary, our stud lost a restocked and is in high risk of losing the second one as well, all it would take would be for him to brush across something in that area and the other would fall out of the sack holding it, we are trying our best to prevent this from happening. The female is pregnant and severely mauled in her neck area (both sides), abdomen and knees, she is swollen (the vet says it is from air entering her body through the large lacerations). Antibiotics are administered by mouth daily along with pain medication, all these cost fall on my family. The judge said we would have to sue at a later time in civil court which would be months away, as we cannot pursue a civil case until all vet care, medication cost, the cost of a farm hand when needed is accumulated and that would be after the horses are healed at least to a point that the daily regimen of cleansing and care and healing has taken place so that we could have an accurate number to present to the court system. I don’t understand how so much of this is falling on my father while the dog owner is given a petty fine and only one emergency vet bill. There has been no media attention just word of mouth in a small town of a population less than 500. I'm trying my best to spread the word on GoFundMe I’ve never used the platform before, someone suggested posting to Reddit and I have gotten around $400 worth of support which I am grateful for but I just don’t know how long we can go on like this, the cost and care are draining and our beloved horses never saw this coming and they will never be the same. Thank you for the email, I appreciate your concern and taking time from your day to ask about our minis." - GoFundMe/Erica Hinson

These poor little minis have a long road ahead of them, assuming they both survive. Their injuries are savage. When Hinson writes, "I just don’t know how long we can go on like this," it makes our heart break. All of it is heartbreaking; the attack, the injuries and what will be a prolonged aftermath. If Rebel and Chocolate do survive, "they will never be the same," she writes. Horses are known to carry traumatic experiences with them for many years, a form of equine PTSD. 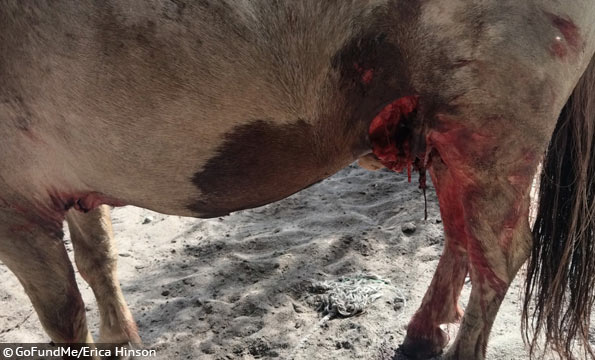 The vicious dog attack inflicted mutilation injuries to the genital region of Rebel, the male mini.

16 thoughts on “Mini Horse Needs Your Help After Vicious Dog Attack in Bethune, South Carolina; One Mini Has Already Died”