On April 3, Amanda Underwood and Queen Charlotte, a draft horse, were severely injured after a pit bull-mix broke free and attacked the horse while it pulled a carriage in Cane Creek Park.

Union County, NC - On April 3, pit bull-mix violently attacked a draft horse pulling a carriage in Cane Creek Park as children screamed in the background. The carriage driver, Amanda Underwood, was seriously injured while trying to fend off the attack. The draft horse, Queen Charlotte, was also badly injured by the dog. A cell phone video captured part of the attack, where one sees the dog repeatedly attacking the horse, until Queen Charlotte delivers a ruinous kick.

After the attack, Amanda's brother spoke to Fox 46. "It was bad. I mean it was horrific," said Travis Medlin. "The dog jumped up an actually latched onto the horse's throat ... the horse trampled my sister four different times throughout that event. Each time, she just came back and continued to fight the dog, was trying to save the horse." She suffered multiple head wounds and a broken foot that will require surgery, Medlin said. Hospital bills are expected to cost at least $25,000.

"My sister is the blonde in the red shirt. This video only captures the end of what happened. The attack lasted a distance of 200 yards. My sister was driving the carriage when the pit attacked and latched onto the horse's neck. She handed the reins to her assistant and jumped down and threw the dog off. This repeated many times. My sister fought with the dog under the horse and in the process was trampled by the horse 4 different times. She went to the hospital and has 4 hematomas on her head from being kicked by the horse. Had to have the back of her head staples, a broken foot, horse shoe shaped bruises all over, swollen knee that will need an MRI and is so sore she cant get out of bed. With all that, you see her still standing by the horse at the end of the attack like the bad ass she is. If not for her actions things would have turned out much worse for everyone involved.

As for the horse, it has 15 bite wounds on its neck and legs, multiple bites to its face and its lips were shredded, but it's doing ok.

Since the attack, multiple events have occurred. On April 12, RaleighLink14, who is a horse owner and an animal activist, published a video commentary featuring parts of the Fifth Estate documentary (Pit Bulls Unleashed: Should They Be Banned?) and the Cane Creek Park attack under the title, "Why I No Longer Support Pit Bull Ownership." Her video is the subject of this post. On April 13, we learned that CMPD Animal Care and Control adopted out the dog in 2019.

At the time, CMPD noted that the dog had a "tendency to pull on the leash but he will slow down with gentle pressure." The dog was vaccinated and a health check did not indicate there was any behavior problems, CMPD said.

The dog was adopted in 2019 at an event at South Park Mall. A person who fostered the dog noted that it was "friendly with people and children, loves walks and car rides" but "will pull after cats on his walk." - MyFox8, April 13, 2021

RaleighLink14's video is powerful and self-explanatory. She admits that she will be attacked by pit bull advocates for making the video and admits she was previously an advocate for the breed. "I'm just not anymore," she states. "I can't sit back in good conscience and continue to support the ownership of pit bulls." She later adds, "Someone needs to fucking start speaking out about this. And I know I'm kind of the lone wolf right now, and I'm probably going to be crucified for this..."

Other themes include: While working at a shelter, many pit bulls failed behavior tests and were not safe to adopt out; she had to euthanize a number of pit bulls; she also goes as far to say that pit bulls should be banned, and she asks the glaringly obvious question, "Should everybody be able to own a pit bull? No." She then covers statistical data that our nonprofit has been publishing about for 10 years. The difference being, it's her voice stating it to other animal advocates.

In addition to going against the grain of pit bull advocates, she definitively states that some pit bulls must be euthanized for behavior as well, toppling the Holy Grail of no-kill advocates. That is just two more badges of courage for Raleigh. "I used to think all of the pit bull bans were bullshit," she said, "but if you really look into the statistics, and you really talk to doctors who experience this stuff ... and then you yourself have your own personal encounter ... you start to understand."

Raleigh, however, goes astray significantly toward the end, when she proposes, "sanctuaries should be put in place for pit bulls." Where they "can be rehabbed and live a normal life there." Our nonprofit has written extensively about this fantasy. Pit bull sanctuary after pit bull sanctuary has resulted in fraud, hoarding operations and animal cruelty over the years, including: Spindletop (TX), Olympic Animal Sanctuary (WA) and most recently, The Steffen Baldwin Center (CA).

Baldwin was already headed down a path of doom: a "sanctuary operation" of "reactive" dogs with bite histories. - DogsBite.org, August 18, 2020

Pit bulls that wind up at these places often have impulsive aggression, dog aggression and more. They cannot be rehabbed for living in a normal society. These "sanctuaries" are often little more than each pit bull fenced-off in a small yard alone or kenneled alone. Frankly, these sanctuaries aren't too different than a dog fighter's yard, and in some cases (Spindletop and Olympic Animal Sanctuary) their living conditions are worse, thus the hoarding and animal cruelty charges.

There are nearly 6,000 comments. Common themes include: Not everyone should own a pit bull; the more I educate myself, the more I see the merits of bans; there is a large community of others who feel the same way you do; my mind has been changed dramatically; Raleigh has guts for posting this video; and finally, "How could I argue with those statistics?" Our answer: The same way many people like you have been doing for years, by claiming that our statistics are false.

Umm -- I totally understand where everyone is coming from. But, unless we can stop bad owners from getting dog.. unfortunately for the safety of everybody, including dogs themselves, i believe that only professionals should own Pitt Bulls. They will spend the rest of their lives in shelters and honestly that’s just heartbreaking...

Charlie -- I respect Raleigh for having the guts to post this, as she's almost certainly going to have some of her followers turn on her after they merely see the title of her video...

Vero -- I've been pro pittie for a long time saying it's the owners fault. But the more I educate myself, the more I see that there is merit to the fears and bans of pit bulls ... I think the problem is ultimately both owner and breed...

Fluffies -- I hate that I have to agree with this but you're hitting the nail on the head.

Rebeka -- Thank you for making this video, I personally have supported pit bulls as a breed and believe the "it's the owners not the dog" mantra. This video educated me on the facts, and although it's an uncomfortable topic, I believe it's important to be able to change your opinion when new information is presented...1

Mary-Beth -- This is actually very interesting to me! Up until this moment i have also said "it's not the dog it's the owner". And I just assumed the majority of the people that owned Pit Bulls were the snobby rich people that think having a pit bull was cool and trendy. But how can I argue with those statistics?

Amelia - I own 4 pit bulls. They all are saved from being put down. Anywhere we go we muzzle them not for my dogs safety but kids and other dogs. I believe not everyone should own a pit bull. They are literally wild animals I swear. I own horses and my dogs are not allowed near them. But I agree with you Raleigh...

Rene -- Thank you for making this video. I know there are a lot of advocates for pit bulls and you are ridiculed for even speaking against pits. But just know there is a larger community of people who feel the same way you do. Most have had horrific run ins with these dogs in one way or another...

Elisha -- Its such a tough subject. I use to work at a facility in Jacksonville Fl and our soul purpose was to rehab pits that had been used in the fighting culture. I use to be a HUGE advocate for the breed ... My mind has been changed dramatically the pet couple of years. I still love the breed and I always will. But they are not a good family pet...

Ayanna --The general problem is, that many people underestimate the (genetic) potential of their dogs and the specific training these potentials require. No matter if it is a hunting dog, a herding dog or a dog like a pit bull. Unfortunately, the latter can become incredibly dangerous and since you cannot make sure, that not every - sorry - idiot gets such a dog, there should be some kind of regulation.

Kate -- I used to be an advocate for pit bulls, but once I became a dog owner myself I changed my viewpoints. Every. Single. Time. My dog had been attacked it was by a pit bull. The worst one that happened the owner literally stated to me "he’s been acting like this lately" and he still brought him into a dog park unleashed and with no muzzle...

Sixty-two -- I used to believe pit bulls shouldn't be banned because they were just dogs. I thought it was always the owners fault and only theirs. After watching this video I'm seeing things in a new light and all so much more serious than i initially thought it was.

The violent attack on Queen Charlotte at Cane Creek Park while children screamed in the background has caused a tremendous outpouring from the public and animal advocates. Raleigh may as well have plucked language directly from appellate court rulings in her description of a relentless pit bull attack. "This dog kept coming back over and over and over again ... These dogs will not stop once they find a victim. It is nearly impossible to get a pit bull off of the victim."

The discussion Raleigh has about shelters adopting these dogs out to the public, who in many cases "can't handle" the dog, is well argued. However, news that this dog was adopted out by the CMP Animal Care and Control in 2019, would had added even more fuel to her fire. That shelter, indeed, adopted this dog out to an owner who couldn't control the dog. Notably, the shelter stated it was an American bulldog. Though, it appeared to us and others to be an overweight pit bull-mix.

Finally, the fact that Raleigh is making these statements to her audience of animal advocates, makes all the difference in the world doesn't it? Animals 24-7 is an animal advocacy nonprofit, but faces nearly the same wrath by pit bull owners and no-kill advocates as our nonprofit does. What gives? Both nonprofits are on the front line of collecting data in the area of serious and fatal dog attacks by breed since our government will not. Data that shines a light on dangerous breeds. 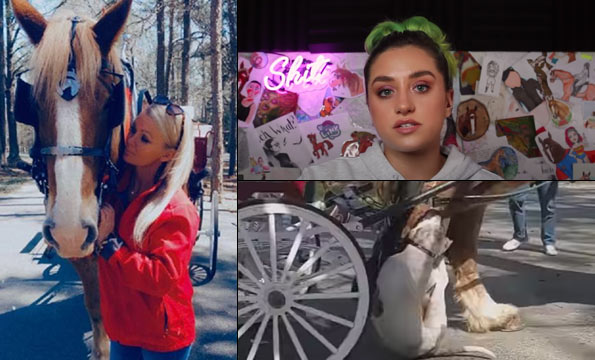 On April 3, an adopted out pit bull-mix viciously attacked a draft horse in Cane Creek Park.