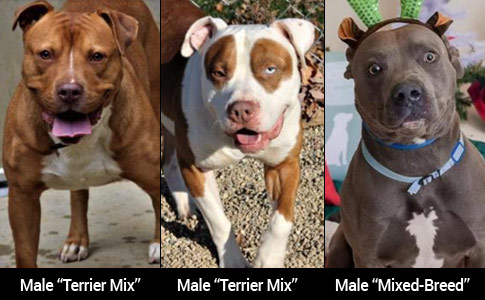 Images of deliberately mislabeled pit bulls that DogsBite.org located in a 60 second online search. Adoptable dogs from taxpayer-funded open intake shelters in the Midwest and Northeast.1

The degree of "hoopla" and "self-congratulation" by rescues after "saving" a dog with extreme aggression, only to secretly put it down, hiding this from their rabid supporters, is yet another dysfunction. It is a vicious cycle, all to carry out the single metric 90% "save rate" of no-kill. The cycle is compounded by a grim result: unstable pit bulls being released to unprepared adopters. Some of these dogs will go on to kill multiple pet dogs; the great irony under the sham of no-kill.

Most of these shelters and rescues, along with their staff, volunteers, and unwitting adopters, oppose mandatory pit bull sterilization laws too, which is the only humane solution to this perpetuating problem that does not restrict ownership in any other way. A 2011 study found that only 27% of pit bulls are spay/neutered, whereas all dog breeds combined is 64%. The author's own experience at an open intake shelter remarks on the low pit bull spay/neuter rate too.

I worked at an open intake shelter for 8 months in 2019. My role was to market adoptable dogs to the public and to private rescue groups. I interacted with medical staff, behaviorists and administrators that consistently denied the Pit Bull crisis.

About 65% of the dogs that came into the shelter were either pit bulls or very obviously mixed with pit bull, but any dog that was not an obvious, undeniable pit bull was labeled and marketed as a Lab or boxer-mix due to breed specific regulations and restrictions with HOAs and landlords, especially solid brown or black dogs that looked nothing like a Lab in structure. An incredible number of these dogs had incidents/bite histories from attacking/killing cats and other dogs, which were glossed over or explained away by supervisors. Many times I would go into the system and re-lable a dog’s breed only to have it changed back by a supervisor and get chastised that no one really knew a dog’s breed without DNA testing and it was our job to get dogs released alive to rescues or adopted.

In the time I worked there, there were four dogs destroyed purely for behavioral concerns, and none were pit bulls -- one was a German shepherd, a mastiff/husky mix, and two rottweilers. Dogs with serious bite/attack histories were released back to their owners as dangerous dogs despite being aggressive and escape-prone, because the supervisors were afraid of the online community of pit bull advocates that watched our online databases like hawks and would call/email/bombard the Facebook page with angry comments if they believed a pit-type dog was in danger of being euthanized due to behavior. Two dogs were sent to rescues after separate, serious incidents, including one where a dog removed and consumed a portion of an animal control officer’s calf after tearing through his uniform pants and latching on; the other dog had killed three smaller dogs in separate incidents after escaping from his yard. Still, both dogs were sent to rescues at great expense and with much online hoopla and self-congratulation. Both dogs were then euthanized within weeks by the rescues that pulled them due to their extreme aggression, which made them impossible to approach, much less train, but none of this was spoken about to the rescues followers or supporters.

There were many times that I was made to feel like I was being unfair to the dogs I was evaluating when I noted their behavioral issues and triggers, such as obvious aggression toward other dogs, barrier guarding, or high prey drive directed toward smaller animals. I was chastised by management for being honest about these dogs, and many times I worried about the homes the dogs went to, with many being poorly prepared for any dog, much less one with the inherent unpredictability of temperament inherent with dogs bred to attack their own kind and smaller animals. Four times, pit bull-type dogs were returned for aggression; one attacked a child in the home, but all five were then sent to rescues, with their hapless adopters demonized as being unfit to own an animal or cruel to the dog when no evidence of such conditions existed.

As many other writers on your blog have noted, because pit bull breeders seem to be less responsible with spaying and neutering their dogs, it is very difficult to find a dog in a shelter or non-breed specific rescue that is not at least partially mixed with pit bull, and the pressures from the greater dog owning community to guilt new pet owners into adopting rather than buying compels people to take on bully breeds who are poorly prepared for them. Personally, as a dog professional, I have no interest in owning a bully breed, which will cost the same amount (or greater, due to the skin issues that also seem to plague them) to vet and feed as any other similar sized dog, with the additional challenge of dealing with unpredictability when it comes to temperament and the restrictions against them. I hope to see effective sterilization shots come onto the market in the future that will allow these dogs to be eliminated from the gene pool. There is no place for this type of dog or the genetics for dog/small animal aggression in a modern, companion animal valuing society.

The misguided "save them all" crusade offers no solutions to the stop the vicious cycle. The no-kill solution is to repeal all municipal-level and housing breed-restrictions on pit bull-type dogs. Their solution is to grow the problem, not to reduce it, by targeting the root of the problem: fewer of these dogs being born. This author offers one solution: "I hope to see effective sterilization shots come onto the market in the future that will allow these dogs to be eliminated from the gene pool."

The author also echoes the sentiment of public safety advocate Ann Marie Rogers, whose experience of pit bulls "was reinforced on a daily basis as we came across animal victims of pit bull attacks and their bereaved owners." The author has a deep concern about dogs with animal aggression routinely being adopted out. "There is no place for this type of dog or the genetics for dog/small animal aggression in a modern, companion animal valuing society," the author states.

"It is not a success, and it is not responsible, if we show sympathy for the dogs we see at our animal shelters, but have no concern for creatures we do not actually meet: the pets and children, out of sight, out of mind, who may pay the price if we unleash the dogs we should euthanize for public safety reasons."2 - Jim Luckwick statement to the Office of the Inspector General, 03/27/15

Rogers and the author, both with animal welfare backgrounds, also used the word "consume" when referencing a violent pit bull attack. "Starvation is not a prerequisite for a pit bull to kill and consume a human being," Rogers said. This author states: "Where a dog removed and consumed a portion of an animal control officer’s calf after tearing through his uniform pants and latching on." We see this routinely in fatal pit bull maulings. Pit bulls are not just biting, they are consuming.