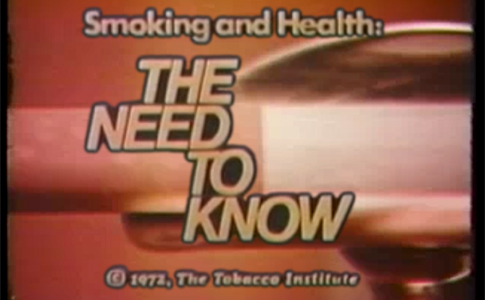 Smoking and Health: The Need to Know -- 1972, The Tobacco Institute.

Smoking and Health: The Need to Know
Have you ever wondered where pit bull propagandists came up with their arguments? Some of them are so kooky, I thought they just made them up themselves. But, after seeing a propaganda documentary produced by the Tobacco Institute it would appear that the pit bull lobby copied their arguments directly from the1970s era tobacco lobby . It seems that defending tobacco is much like defending pit bulls.

Timestamps from Smoking and Health: The Need to Know

2:52 - The narrator practically shouts when he names a list of medical experts we will be hearing from in the film. They will be telling us that cigarette smoking does not cause cancer. When this documentary was produced, there was conclusive evidence that smoking cigarettes caused lung cancer, emphysema, and heart disease. Looking back now, it is easy to see these science hacks were flat out lying.

The pit bull lobby has their own set of experts which they trot out to defend pit bulls. And these experts also should be aware of the yearly death toll inflicted by pit bulls as well as the dozens of published medical studies which all come to the conclusion that pit bulls are far more dangerous than other kinds of dogs. You can find some of these experts on the National Canine Research Council site (owner: Animal Farm Foundation pit bull advocacy group). 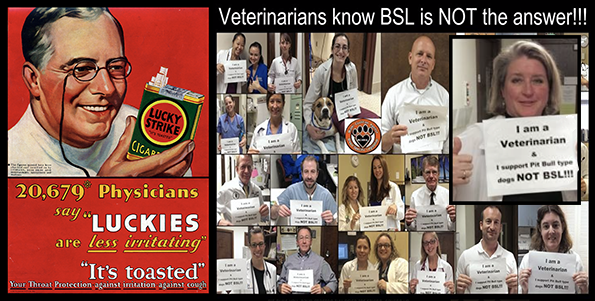 Appeal to Authority: I am a Veterinarian & I support Pit Bull type dogs NOT BSL!!!

6:20 - Many risk factors contribute to heart disease.
While correct, controlled studies had already shown that smokers had a higher risk of heart disease than non-smokers. This argument was copied exactly by the pit bull lobby to hide the fact that pit bulls cause more fatalities than all other kinds of dogs. The NCRC published a paper that describes the “co-occurances”, or common “contributing factors” in fatal dog attacks.

Their study found that there were common elements related to fatal dog attacks. For instance, most victims were less able to defend themselves because of their age. Attacking dogs were more likely to be intact. The NCRC ignored that the dog being a pit bull is the leading factor, by far, in fatal dog attacks. 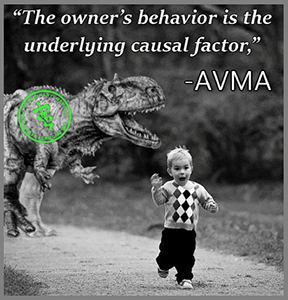 6:50 - The word “cancer” isn’t a scientific term because there are many kinds of cancer.
This is obvious nonsense. The term “cancer” is a term for a group of diseases in which abnormal cells divide without control. And smoking is a leading cause of lung cancer.

The pit bull lobby uses the same exact argument. They say the term “pit bull” is meaningless slang because there is more than one breed of pit bull. This argument is so silly that it is surprising that the pit bull lobby did not make this up themselves. The term describes a group of dog breeds that were originally bred for “sport aggression” for the purpose of dogfighting. And pit bulls kill more people than all other kinds of dogs combined.

10:08 - The Surgeon General's large scale review of literature is flawed.
The "experts" first mention the large report that reviews many studies. Then, they shift to criticizing a single study in the report without explaining the shift. They give the impression that the exhaustive report reviewing thousands of research papers is one single study.

The pit bull lobby uses a similar tactic to mislead by ignoring many studies. The AVMA published a supposed literature review from 2014 entitled “Dog Bite Risk and Prevention: The Role of Breed” However, the authors fail to include all recent studies, of which there are many, on the role of breed in aggression, bites, and attacks. Instead, they cherry pick old studies that support their position that breed has no role in the prevalence of bites and attacks. Many of the cherry picked studies are from a time when pit bulls were rare. 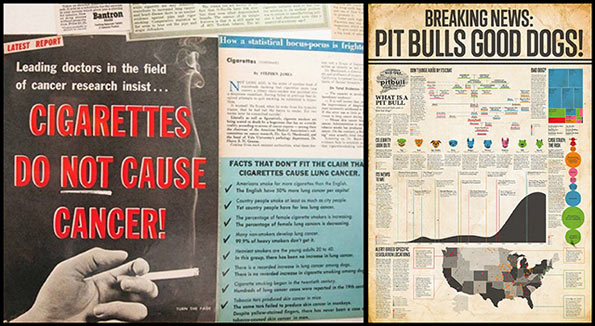 Lobbyists make false claims that only appear to be supported by science.

13:48 - Since not all people who smoke get lung cancer, smoking can’t be the cause.
Doctors know that smoking is a risk factor that raises your chance for getting cancer. Not just a risk factor - the leading risk factor. The hack doctor knows that risk factors increase your risk, they do not guarantee you will get cancer.

The pit bull lobby adopts the same argument. Since not all pit bulls attack, genetics and breed can't be the reason serious and fatal pit bull attacks are so prevalent. This is just as nonsensical as the argument the tobacco industry doctors make. No one has ever said that all pit bulls are going to attack. But pit bulls are indeed much more likely to inflict serious injuries than other breeds.

The pit bull lobby's version of this argument is simple: Other kinds of dogs bite, too. Obviously, though true, the statement is irrelevant because pit bulls are still responsible for 66.4% of all dog bite related fatalities.

17:24 - “Most mortality statistics in the cigarette controversy are based on death certificates, not on autopsies performed.” “Death certificates are notoriously inaccurate.”
Here it is suggested that deaths attributed to lung cancer were misidentified and that another disease or condition was the cause of death. According to the Tobacco Institute only autopsies are accurate enough to determine lung cancer is the cause of death. However, during the sixties, several studies found that death certificates were largely accurate.

The pit bull lobby's version of this argument claims that news articles and medical records are inaccurate because they misidentify other kinds of dogs as pit bulls in dog attack articles and research. But they offer no proof to support this. The pit bull lobby claims that only DNA tests can confirm that a dog is a pit bull. But, the courts have consistently found that a person of average intelligence can visually identify a pit bull. In fact, a recent study shows that pit bulls as well as mixed breed dogs with pit bull characteristics are responsible for more serious attacks and for a greater number of attacks. This study confirms that pit bull mixes with visible pit bull traits are as dangerous as pit bulls.

A Tobacco Institute Video from 1984. Note how the lobbying works on a federal and state level.

Related articles:
07/16/20: Pit Bull Myths: The Media Conspiracy Against Pit Bulls - DogsBite.org
10/20/16: Back Story of the Montreal Pit Bull Ban, What the Vets Omitted and Cited...
04/20/15: A Primer on State Preemption Laws and Charts for Advocates - DogsBite.org

20 thoughts on “The Propaganda is All the Same: Pit Bull Lobby and Tobacco Institute by Lucy Muir - Perspectives of Advocates”