Video shows the suspect leaving the scene after a vicious "dog attack and dash" in Atlanta.

Police Increase Reward
Atlanta, GA - On April 2, Lane Pilcher and her dog Banjo were walking along a popular trail in Atlanta called the BeltLine when a pit bull "barking very aggressively" broke free from its owner and attacked Pilcher and her dog. "All I had time really to do was grab my dog, pick him up and turn my back toward this dog that was coming at me," Pilcher told CBS 46. She picked up Banjo, but the pit bull latched onto her right arm and "took a whole chunk out of my arm," she said.

"Police say the victim, who is a Buckhead resident in her 30s, and the suspect were each walking their dogs April 2 around 5 p.m. on the BeltLine near the Bitsy Grant Tennis Center at 2125 Northside Drive. According to the police report, the suspect’s dog broke free of its leash and ran toward the victim. The victim said she "picked up her dog and turned her shoulder facing the charging canine," according to the police report. The attacking dog jumped and bit the victim on the upper arm, causing a serious wound that required surgery." - Atlanta In Town

The suspect pulled her dog off Pilcher while several witnesses aided Pilcher, according to police. The suspect said she would secure the dog, but instead fled with her dog and sped off in her vehicle, police said. "The suspect was driving a white BMW car with an Ohio license plate with the number HLM8829 and a front novelty plate reading "535 BMW," reports Atlanta In Town. Police released surveillance video of the suspect leaving the scene with her pit bull on April 14.

The owner is seen in a garage using a retractable leash and holding something in her left hand, but we can't tell what that item is.

The initial reward was $2,000. Police later increased it to $4,500. Pilcher shared an image of her graphic injury on her Facebook page. "The photo of my arm is difficult to look at but we don’t want this to happen to anyone else," she wrote. Her injury is an avulsion; all areas of the skin have been torn away. Commenter Kim Hudson Hall warned her, "We went thru same thing in January 2019. You will find GA laws & county ordinances on dog bites not favorable to you. Good luck!"

This suspect had a leashed pit bull that broke free. She did not allow her dog to "go at liberty," such as walking the dog without a leash. "Careless management" is not as simple as it appears either. Carelessness may require a higher degree of irresponsibility, such as "keeping the dog tied to a tree with a chain that extends to the curb" or "entrusting the dog to an incompetent caretaker like a 5-year-old," according to DogBiteLaw.com. We hope Pilcher obtains a good attorney!

It is unusual for us to see a monetary reward offered after a violent dog attack.1 Further, owners of pit bulls routinely flee the scene with their dog after an attack, especially when the victim is another animal. Attacks on humans involve the rare possibility of rabies, which has an incubation period of weeks to months, depending upon the location of the bite (the closer to the brain the shorter the period). Once clinical signs appear, it is too late. Rabies is nearly always fatal.

In addition to the surgeries Pilcher underwent, she may have already undergone the rabies vaccine too, which is 4 doses over a 14-day period. It should be a Class A misdemeanor in every state when a dog owner flees the scene after his or her dog bites a human, due to the lethality of rabies and its cost. The vaccine can cost up to $10,000. In the rare cases that we do see urgent police alerts asking the public to help locate a dog owner, it regards the dog's vaccination status.

We contacted the Atlanta Police Department to clarify the charges against this female suspect. Officer Anthony Grant told us in an email exchange the "woman could be charged with reckless conduct." Grant also reminded us that the investigation is still open and that charges could change, as the investigation progresses. This charge is far more serious than failure to provide proof of rabies vaccination, which is typically a modest infraction or low-level misdemeanor.

Under Georgia criminal code, reckless conduct is when a person "causes bodily harm to or endangers the bodily safety of another person by consciously disregarding a substantial and unjustifiable risk that his act or omission will cause harm or endanger the safety of the other person and the disregard constitutes a gross deviation from the standard of care" a reasonable person would exercise. It is a misdemeanor that carries up to 12 months in jail and a $1,000 fine.

"A bite really doesn't describe what happened here ... Unbelievable and heartless that she would just leave me badly injured." - Lane Pilcher

Only about 20% of fatal dog maulings result in meaningful criminal charges, which we define as a felony charge or at least 6 months in jail. Criminal charges after severe injury nonfatal maulings may be even less common (no system tracks this, so no one knows). It is clear that the combination of Georgia criminal code and the outrageous acts of this suspect compelled not only criminal charges, but also a reward of $4,500 for information leading to the arrest of this suspect.

Pilcher said that doctors were not able to "put any stitches in my arm because there was nothing there to reattach." Frequently inflicting avulsion and degloving injuries is yet another way that pit bull injuries are more severe than bites by other breeds; both wound types often require skin grafting. Bordering on tears, Pilcher states the universal prayer of all dog mauling victims: "We all need to do whatever we can to make sure that this doesn't ever happen to somebody else."

The universal prayer of all dog mauling victims, "This cannot ever happen to someone else," is the steadfast conviction that drives our mission.

Pilcher's Facebook page states that she is an RN at Children's Healthcare of Atlanta. WSB-TV reported that she treats Covid-19 patients. A similar "dog attack and dash" recently occurred in Massachusetts. Jennifer Rolfs, who is a critical care nurse at Beth Israel Medical Center, nearly lost her dog Oscar to a violent pit bull attack. Those pit bull owners, also captured on video, fled the scene after their dogs attacked. Rolfs told WHDH, "This whole month’s been a bad dream."

Rolfs also describes a possible degloving injury inflicted by one of the pit bulls on Oscar's back leg. "The pit bull must have had the leg in his mouth and they ripped it off, so the skin is pretty torn apart," she said (Notice how her hands imply peeling back skin?). Bridgewater State University Police Chief David Tillinghast said he was upset by the attack. "It’s just no way for people to act, particularly right now." Tillinghast has asked the suspects to come forward -- fat chance!

It is unusual for us to see a monetary award and criminal charges after a nonfatal dog mauling. The latter type, alone, certainly occur. Georgia's "Responsible Dog Ownership Law" applies to serious injury and death caused by a dog attack. Notably, Atlanta police must know who the female suspect is -- the surveillance camera captured both license plates. The reward of $4,500 pertains to locating the whereabouts of this suspect that leads to an arrest and indictment.

"Dog attack and dash" is a fairly common response by pit bull owners after an attack, especially when the victim is a pet. Covid-19 conditions are not going to change this. This was one of the first behaviors of pit bull owners that we called out during the first year of our operation in 2008. We wrote about this 18 times that year alone. More search results from that period appear for the terms "fled the scene" too. Expecting a behavior change due to Covid-19 is wishful thinking.

Finally, locating the Atlanta suspect does not equate to locating her dog, which would prevent future attacks by this dog. This attack occurred 26 days ago. That dog could be anywhere now, including back in Ohio. An owner that flees the scene of a vicious attack is the same type of owner who will hide their pit bull(s) after an attack.2 Recall what Officer Grant told us: "It is important to note the investigation is still open and charges could change, as the investigation progresses." 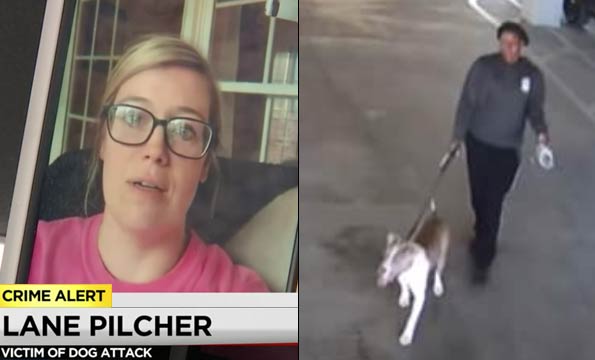 The victim, Lane Pilcher, speaks to CBS 46 after a vicious "dog attack and dash" in early April. 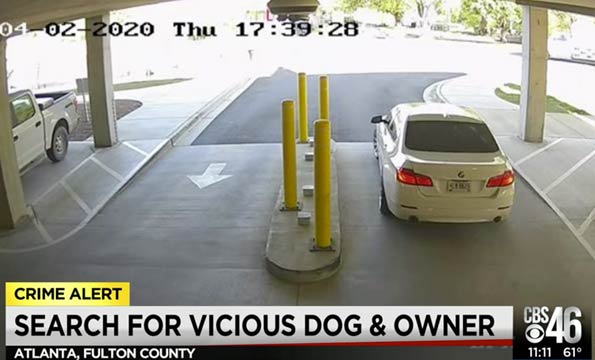 The suspect's white BMW seen leaving the scene after a "dog attack and dash" in Atlanta.

1We see plenty of awards involving pit bull cruelty cases -- those are often paid for by animal welfare groups.
2We linked to the Deaunte Nobles case to help readers understand "reckless conduct" in Georgia. Nobles was charged with 3 counts of reckless conduct for allowing his pit bulls to run free, 3 counts for failing to call 911 for the victim and 1 count of reckless conduct left undefined. Nobles hid his pit bulls instead of turning them over to authorities and his dogs had a history of aggression. The victim Dudley Willis, 42, had both arms amputated.

18 thoughts on “$4,500 Reward for Information Leading to Arrest and Indictment of Pit Bull Owner in Atlanta after 'Dog Attack and Dash'”