Lee Becham, 76, died after being brutally attacked by pit bulls in Crawford County.

Manslaughter Charges
UPDATE 03/10/20: A couple has been arrested in connection to the mauling death of a 76-year old man last month, the Crawford County sheriff said Tuesday. Samuel Arthur Brown, 55, and Angel Ann Brown, 52, were arrested on involuntary manslaughter charges after Lee Becham was discovered dead in the yard of his residence in the 1900 block of Marshall Mill Road on February 23. The autopsy results showed Becham died of "traumatic injuries due to dog attack."

WMAZ spoke to Walker, who said, "As this investigation took its course, there wasn't any disagreements about the involvements the dogs had in it." The Browns reside on Atkinson Road, just feet away from Becham's home. WMAZ also spoke to Monty Beverely, who previously shot at the dogs to defend himself. "We all just want justice done," he said. "It's just a horrible way to die." The judge set the couple's bond at $20,000 each. Their next court date is set for May 22.

A Crawford County couple appears in court Tuesday in connection with a fatal dog mauling. 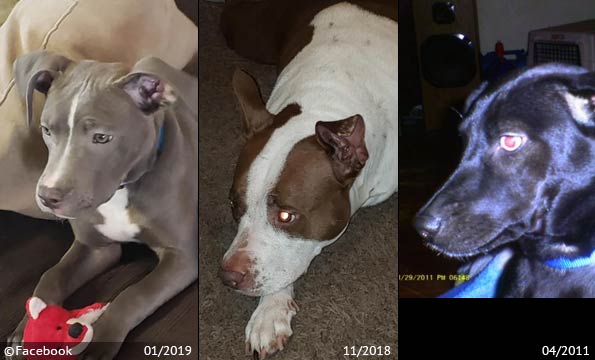 Two pit bulls and a Labrador seen on the Facebook page of the girlfriend of the owner's son.

03/05/20: Preliminary Autopsy Results
Preliminary autopsy results show that a 76-year old man found mauled and dead last month died of injuries he sustained in a dog attack. "The preliminary autopsy results for Lee Alvin Becham was traumatic injuries due to dog attack," Sheriff Lewis Walker stated in an updated March 5 press release. "Three dogs that are suspected in this case have been removed from their owners." Becham was discovered dead in the yard of his home on Marshall Mill Road on February 23.

Deputy Coroner Kenneth Winslett pronounced Becham dead at the scene. On February 24, Coroner Sheldon Mattox confirmed that Becham had "severe dog bite marks" on both of his extremities. According to family members, the three dogs, all described as pit bulls, approached investigators at the scene growling, but the suspected dogs were not taken into custody at that time. Walker said that no canines would be seized until a cause of death was determined.

02/27/20: Victim was a War Veteran
There has been no new information since February 24. At that time, Sheriff Lewis Walker said the Georgia Bureau of Investigation (GBI) would conduct the autopsy. Many times, the GBI takes over the investigation of a fatal dog mauling in rural Georgia jurisdictions. This law enforcement agency has seen many of these cases. We hope the same is true after the death of 76-year old Lee Becham. He died after being brutally attacked in his own yard by one or more loose pit bulls.

A relative provided unconfirmed information on the WMAZ Facebook post several days ago. She said the dogs approached officials growling at the crime scene while they were investigating. She commented on how the dogs were not killed or quarantined and wondered why. To answer her question, it is unheard of for law enforcement to not seize suspected dogs after a death shows "severe dog bite marks." These dogs are routinely seized before autopsy results are known.

Becham served in the U.S. Army and was a Vietnam War veteran, according to his obituary. He went on to attend technical school and began working as a plumber's apprentice in Lizella. He later established his own business, "Becham Plumbing." He worked for over four decades and eventually became a certified plumber inspector. Becham loved the outdoors, working in his yard and riding his Harley Davidson. His celebration of life service will be held Saturday afternoon.

On Friday evening, WGXA reported that GBI has completed the autopsy of 76-year old Lee Becham. The man was discovered dead in his yard covered in "severe dog bite marks" last week. Crawford County Sheriff Lewis Walker said the cause of death would not be released because this is an ongoing investigation. When Becham was found unresponsive in his yard on February 23, sheriff's officials declined to seize the suspected three or four pit bulls belonging to a neighbor.

02/24/20: Sheriff's News Release
Crawford County, GA - Earlier today, Crawford County Sheriff Lewis Walker confirmed that a 76-year old man was found unresponsive in his own yard in the 1900 block of Marshall Mill Road on February 23 at about 5:08 pm. Deputy Coroner Kenneth Winslett pronounced Lee Alvin Becham dead at the scene. There were "signs of bite marks" on his body, Walker said. Coroner Sheldon Mattox later confirmed that Becham had severe dog bite marks on both of his extremities.

Neighbors said that a pack of pit bulls have been a problem in the area. The man even had to shoot at the dogs last week. An autopsy is being conducted to determine his cause of death. Google Earth shows that on a property close to Becham's home, there appears to be a "yard" of pit bulls. Those look like chaining circles in the photograph and at the side of each is a doghouse or barrel. This is a common set up for breeders of fighting dogs; we call them crop circles.

County officials said that three or four pit bulls live next-door to Becham's home, reports WMAZ. Neighbor Monty Beverly said the dogs have been problematic since the owners moved in less than a year ago. He was forced to fetch his shotgun to ward off one of the dogs. He eventually shot at one to defend himself and his wife. Beverly was Becham's neighbor and his friend. "If I knew them dogs were going to jump on my buddy down there, he'd be a dead dog," he said.

The Georgia Bureau of Investigation (GBI) will conduct the autopsy. "He did have bite marks on his body," Sheriff Lewis Walker said, so we are going to send his body to the GBI crime lab. The autopsy has been rescheduled for Tuesday morning, Coroner Maddox said. Currently, none of the canines have been seized. Walker said they would not take the dogs until a cause of death is determined. This is apparently under the assumption the dogs will still be around at that time. 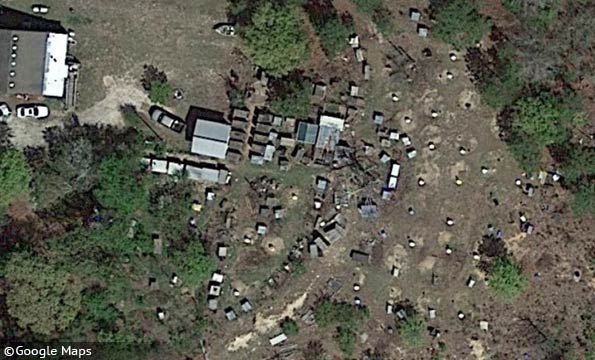 A nearby property appears to show chaining circles for at least a dozen staked out pit bulls.

View typical "yards" of fighting dogs we have collected over the years here and here.

Baseline reporting requirements:
Law enforcement departments across the United States should release consistent "baseline" information to the media and the public after each fatal dog mauling, including these items.
Tweet
Share882
Tweet
Share882
Donate Now