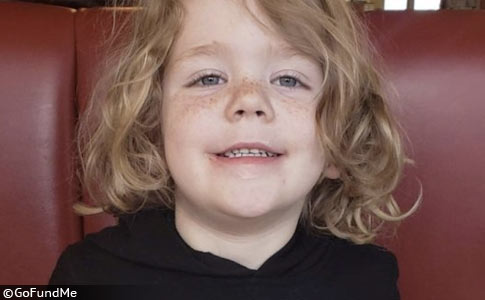 Family Pit Bull Kills Child
Oro Grande, CA - A 5-year old boy is dead after being attacked by a family pit bull, according to San Bernardino County Sheriff’s Department officials. The attack occurred just before 3:00 pm in the 15100 block of Portland Street. An adult was watching the child when the attack occurred. The adult witnessed the attack as it was happening and called 911. News footage shows animal control officers leading a dark brown male pit bull from the home and hoisting it into a truck.

News chopper footage shows detectives from the San Bernardino County Sheriff's Department gathered around a shed in the home's backyard, where the attack occurred. Multiple emergency units responded to the scene, but paramedics were unable to save the boy's life. "Unfortunately, the child did not survive," Sgt. Jeff Allison told NBC Los Angeles. It's unclear which adult relative had been watching the boy. Currently, detectives are at the scene interviewing family members.

NBC Los Angeles spoke to two family members who said both parents of the boy were at work when the family pit bull "snapped" and fatally attacked the boy. The child lived at the home where the attack occurred, according to a female cousin and an uncle of the boy. Both relatives were babysitting the child at the time. They had left the child alone briefly in a playroom in the backyard when the dog attacked. "I jumped in and tried to help," the cousin said, "but it was too late."

"It was totally the dog's fault. Nobody was arrested. Just the dog was taken in, and I don't know the status of the dog," the cousin said, who spoke on camera, but would not be identified. The family got the pit bull when it was a puppy, the cousin said. She warned the public of their danger. "Don't trust pit bulls," she said. "They can change at any moment." The attacking dog, a male pit bull named "Thor," was reportedly 12 years old. Family members want the dog euthanized.

The same cousin told CBSLA, "All we did was step out for like two seconds just to grab the controller for my cousin to play the game." When the two walked back into the playroom, where the boy was, the pit bull had the child by his neck and "would not let go." She said the dog had never hurt anyone before. "He was a loving dog," she said. "He was not a vicious dog, but how it snapped, we don't understand." The dog's owner surrendered the pit bull to animal control.

The San Bernardino County Sheriff's Department released a statement to the media, "Through the investigation, deputies learned the child was being supervised by an adult relative at the residence. The adult stepped out of the room, leaving the child alone with the pit bull. When he returned, the dog was attacking the child and would not release him. There were no other children present during the attack." The boy died of his injuries before deputies and fire officials arrived.

Additional raw news footage from the scene is also provided by the Victor Valley News Group. 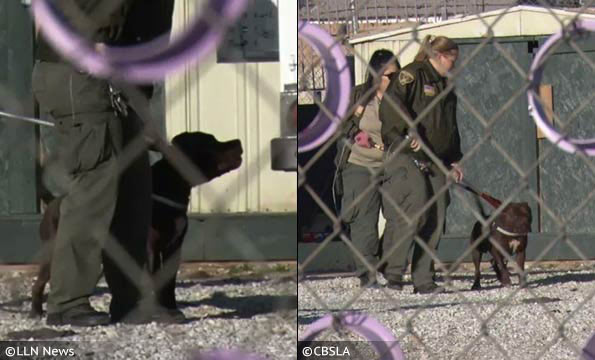 Animal control officers confiscate a family pit after it killed a 5-year old boy in in Oro Grande. 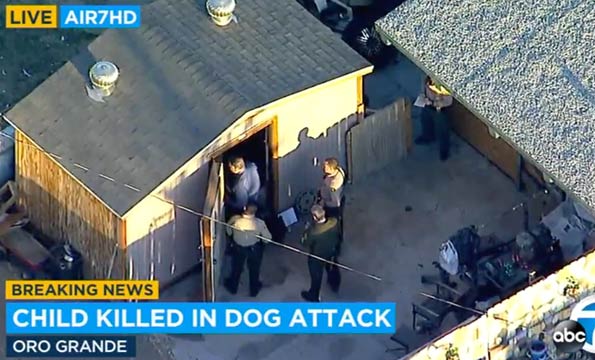 San Bernardino County Sheriff's detectives outside a shed, where the lethal attack occurred.