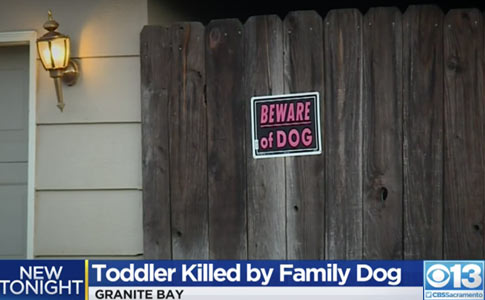 A toddler is dead after being attacked by a family pit bull in Granite Bay, California.

Dog's Instagram Page
UPDATE 09/24/19: We located the 6-year old female pit bull that belongs to the baby's parents. The parents created an Instagram page for "Bella" back in July of 2015. Additional social media pages of the parents show the same dog as a young puppy on October 16, 2013. The parents had raised this pit bull from a puppy. The Instagram page shows just how much they adored this dog. On September 20, while a female relative was watching the baby, Bella fatally attacked the boy.

We re-watched the September 20 press conference of Lt. Andrew Scott to resolve conflicting reports of whether the child had ever had contact with the dog before. "The baby was 13-months old," Scott states. "A relatively new addition to the household. Sometimes when you have a new child come into the household with an existing family pet there can be issues. Not this severe, typically. It's just another thing to keep an eye on if you have a newborn in the house," Scott said.

13-months is barely "relatively new" and 13-months is not a "newborn." A newborn is a literal term (newly born) and is 0 to 2 months in age.

Sometimes in breaking news, wires get crossed. During the Fox 40 segment, where the "not had contact before" information originated, Lt. Andrew Scott is interviewed, but Scott does not state on camera that the toddler had never before had contact with the dog. The Instagram page of the baby's father shows the toddler had spent time with the dog, using hashtags #bellablue #thekiddos and #sundayfunday on an October 2018 photograph showing the pit bull and baby boy together.

In summary, the social media pages of the child's parents show the couple owned a 6-year old female pit bull that they doted on so much, they created the dog an Instagram page. The last photograph of Bella was posted on May 11, 2018. The child was born in early August 2018. The parents had raised this pit bull from a puppy. At the time of the attack, a female relative was babysitting and was in "very close proximity" with the child when the family pit bull attacked.

Notably, this may be the first fatally attacking dog in the U.S. to have it's own Instagram page. 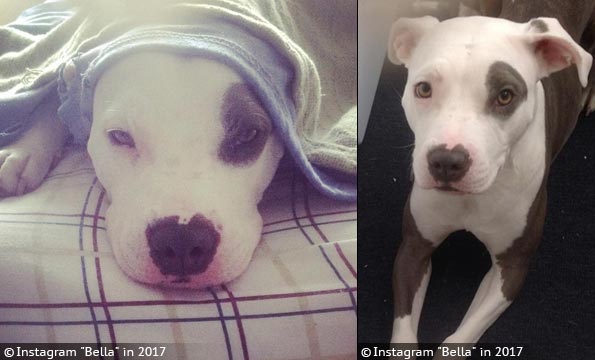 09/20/19: Family Pit Bull Kills Baby
Granite Bay, CA - A baby boy is dead after being attacked by a family pit bull, according to the Placer County Sheriff's Office. Deputies responded to a home in Granite Bay just after 3:00 pm Friday after a report of a dog mauling a 13-month old baby. The child was at home with a family member when the dog attacked. The person was able to free the baby from the dog and called 911. The child was transported to Roseville Medical Center, where he was pronounced dead.

Placer County Sheriff’s Lt. Andrew Scott said the family member was not the boy's parent. The deadly attack happened in the living room of the home and was unprovoked, according to the sheriff’s department. No signs of negligence were apparent. The dog is described as a 9-year old family pit bull. Placer County Animal Control confiscated the dog and placed it into quarantine. Detectives from the Crimes Against Persons (CAP) Unit are investigating the baby's death.

"The adult was with the baby when the attack occurred and didn't appear to hint at anything that the attack was coming." - Sheriff's Lt. Andrew Scott

Fox 40 News spoke to Lt. Scott, who said the child and the dog had not had contact before Friday -- which suggests the dog was visiting the child's home and the dog's owner, a relative, was babysitting the baby at the time. Fox 40 also described the pit bull as being only 6-years old. "This family has been completely devastated by what occurred," Lt. Scott said. "It's a very emotional situation at this time." The attack occurred in a home on Olive Ranch Road in Granite Bay.

CBS Sacramento, who went to the Granite Bay neighborhood last night, reports the 6-year old pit bull was a female. They interviewed a neighbor, Gavin Smith, who indicated the relative watching the toddler was a female. “My mom heard from somebody that there was blood on the lady’s face or on the kid’s face,” Smith said. Smith is also the owner of two large pit bulls. Smith can't figure out "how" this happened. This baby boy marks the 233rd child killed by a pit bull since 1980.

The last recorded fatal dog mauling in Placer County occurred in 2007, when 61-year old Cora Lee Suehead was brutally killed by four pit bulls belonging to a relative near her home. More recently, in 2016, in the neighboring county of Yuba, three pit bulls living in a dilapidated trailer belonging to Alexandria Griffin-Heady killed her 9-year old half-brother, Tyler Trammell-Huston, while he was on an unsupervised visit. The Yuba County DA declined to bring criminal charges.