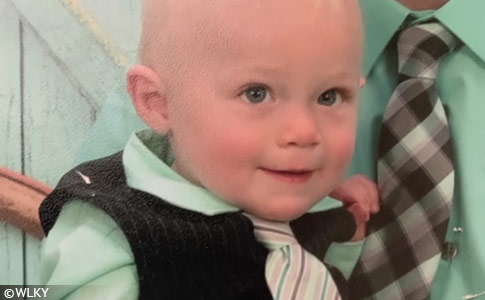 On Thursday, Isaiah Geiling, 2, was mauled to death by a family pit bull in Louisville.

Mother Fights Extradition
UPDATE 01/07/21: The mother of a child killed by a pit bull is now fighting extradition from Shelby County, Indiana to face charges in the death of her son. Jennifer Geiling, of Louisville, was arrested on December 30, on a warrant issued out of Jefferson County, Kentucky, on charges of manslaughter in the second-degree and reckless homicide. Due to Covid-19, her trial, which also charged two other adults, has been continuously been delayed. Geiling eventually fled to Indiana.

The Shelby County Post reports new details, including that the dog had attacked multiple people in the past, including its owner; a neighbor had previously shot at the dog and that Louisville Police had previously responded to calls about the aggressive dog. According to testimony from a neighbor, Geiling blamed her child, saying, that the child "always screams and sets the dog off." Geiling remains in custody at the Shelby County Jail while the extradition proceedings continue.

"According to Kentucky Court Records that obtained by the Shelby County Prosecutor, the charges stem from an incident on May 2, 2019, when Geiling’s 2 year-old son was mauled to death by a pit bull. According to the report and information from an investigator with the Jefferson County, Kentucky Commonwealth Attorney’s Office, this not the first time that the pit bull had injured the child, and the pit bull also had a history of aggression against various others as well, up to the point that one neighbor had previously shot at the dog. It had a history of attacking and biting people, including its owner, and the Louisville Police Department had responded before to calls regarding the aggressive dog.

The report indicates that on May 2, 2019, another woman was lying on a bed and watching television with the child when the pit bull (named "King") jumped onto the bed and immediately grabbed the child by the head and began shaking him violently. The dog then pulled the child to the floor, where it clamped onto the child’s head/neck area and resumed violently shaking the child. By the time that two neighbors were able to get the dog to release the child, it was too late." - Shelby County Post, January 7, 2021

07/23/19: Three People Indicted
Three people have been indicted after the fatal dog mauling of a 2-year old boy back in May. Jack Charpring Jr., 50, and Sharon (Sharyn) Charpring, 53, are both charged with second-degree manslaughter in connection to the brutal death of 2-year old Isaiah Geiling. The Charprings reside at the home in the 3800 block of Grand Avenue where the deadly attack occurred. The child's mother, 25-year old Jennifer Geiling, faces a charge of complicity to reckless homicide.

Prosecutors said the Charpings and the Geilings are not related, but lived in the same residence on Grand Avenue, reports WLKY.

Jack Charpring owned the male pit bull named King that fatally attacked the boy. He previously spoke to WAVE-TV but refused to be identified. In a husky voice, Charpring stated in May: "I know it was an accident. But, at the same time, he did take a little boy's life accidentally. Eye for an eye. Little boy died, he [King] deserves to die." Charpring also claimed his dog had never bitten Isaiah before. Both Charprings can bee seen in the background of this news footage looking anxious.

The child's mother has multiple Facebook pages, each with different last names. After Isaiah was killed, his maternal grandmother, Cynthia Coy, asked WDRB, "Where was my daughter? Was she there?" Coy also said the dog had previously bitten Isaiah. She showed a photograph of the boy's dog bite injury too. Thus, there are now significant criminal charges. The adults who were Isaiah's caretakers knew about the dog's vicious propensities and did not protect Isaiah from this dog.

05/03/19: Dog Attacked Child Before
On Friday, WLKY updated their report with new information. They spoke to the child's maternal grandmother, Cynthia Coy, who said the deadly dog mauling came just weeks after the dog had attacked Isaiah, ripping his ear. Coy provided a photograph of the child's injury. "So obviously the dog has attacked him before," Coy said. "Where was my daughter? Was she there?" Coy asked, referring to the home on Grand Avenue where the fatal dog mauling occurred on Thursday.

According to WLKY footage, Isaiah was with a "relative" at the home on Grand Avenue when the dog attacked. Shelby Chadwell, who along with his cousin risked his life to save the boy, stated yesterday, "The man that owns the dog had a very tough time wrestling the dog, pinning it, and getting it under control to take it back home." Unidentified neighbors told WLKY the dog was known for its aggressiveness and had gotten loose at least two or three times in the past.

05/02/19: Family Pit Bull-Mix Kills Boy
Louisville, KY - A 2-year old boy is dead after being attacked by a dog in Louisville's Chickasaw neighborhood. The attack occurred inside a home in the 3800 bock of Grand Avenue. Officers were dispatched to the home at 12:00 pm, after a report that a dog had bitten a child, according to Louisville Metro Police. When officers arrived at the scene, they found the injured boy and began performing CPR. He was transported to Norton Children's Hospital, where he later died.

A reporter from WLKY Tweeted earlier today that the attacking dog is a pit bull. The WLKY Facebook page shows an image of a dog appearing to pit bull-lab mixture being taken from the home on Grand Avenue. So far, police have not released breed information. The address of the home on Grand Avenue is also listed on the Foreclosure.com website. The dog was taken into custody by Louisville Metro Animal Services and will be held in quarantine for 10 days.

Audio dispatch from Louisville Fire on Broadcastify.com clearly states the dog is a pit bull and the child was bitten in the head. "Engine 19, I have you responding, this is EMS code 3. Police are responding along with EMS … Approximately a 3-year old child that has been bitten by a pit bull in the head. Heavy bleeding. Child is conscious. Time is 12:02," states dispatch. The dispatcher then quickly relays a critical update to Engine 19, "Update, advised, this child has stopped breathing."

The Louisville Courier Journal reports that police responded to the home in the 3800 block of Grand Avenue about noon on reports of a child in the mouth of a pit bull, according to dispatch records. Officers performed CPR on the young boy before the ambulance arrived. A spokesman for Louisville Metro Animal Services, Teeya Barnes, confirmed to Courier Journal that her agency responded to the residence on Grand Avenue after reports that a child was injured by a pit bull.

"He was barely breathing on the floor, a lot of blood, face down. It was the worst. It's not something I want to relive." - Neighbor Shelby Chadwell

WDRB spoke to neighbors who rushed to help the boy. Shelby Chadwell, who lives next-door, said a woman pounded on his door Thursday morning asking for help. Chadwell and his cousin ran into the home and found the dog on top of the child. "It was a ferocious dog," Chadwell said. "We had to get the dog out of the room. So my cousin used sticks and bashed them together and scared the dog away. We put the dresser in the hallway to block the dog off and get out of there," he said.

WDRB also captured footage of the dog while animal control officers used control poles to contain it. The dog is seen biting the poles. Investigators say the only thing that is left to determine about the dog's breed is whether it is a purebred pit bull or pit bull-mix. Lt. Emily McKinley said that responding to the scene was difficult for everyone involved. "I know a lot of people are pretty shook up having to go through that and experience that, including our officers," McKinley said. 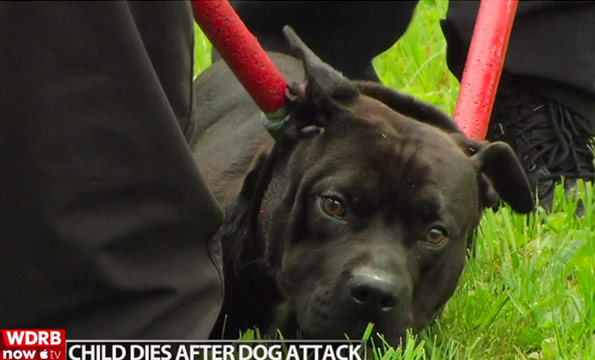 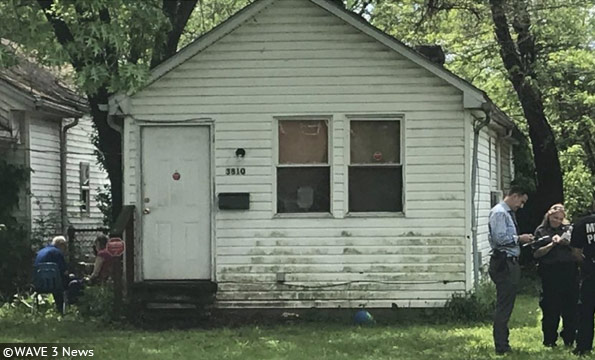 The home on Grand Avenue where a 2-year old boy was killed by a pit bull-mix in Louisville.