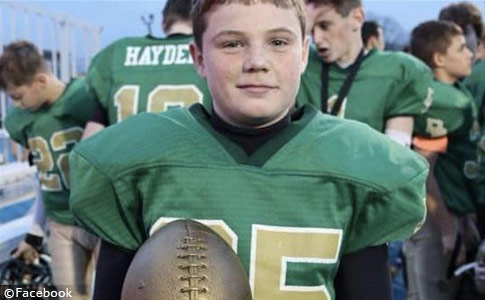 Ryan Hazel, 14, was found dead after after a dog attack in Dighton, Massachusetts.

Final Report Issued
UPDATE 06/21/19: The Bristol County District Attorney's Office released its undated final report determining there is no basis for filing criminal charges in connection to the death of a 14-year old boy. On May 9, 2019, five dogs at a property on Maple Swamp Road brutally killed Ryan Hazel. The dogs and property belong to Scott Dunmore, who was away during the attack. Ryan regularly cared for Dunmore's dogs while he was away. All five dogs were humanely euthanized.

"Ryan was experienced in caring for dogs; these five dogs in particular. He was devoted to caring for the dogs in a kind and humane manner."

The report states that Ryan was attacked by "one Dutch shepherd (two years old) and four Belgian malinois (three of whom were eight months old, and one of whom was four years old)." The attack likely occurred between 6:35 pm and 6:45 pm and the "sequence of events and the cause of the attack is not known and will likely never be known," states the report. "No evidence points to Ryan's actions or conduct contributing at all to cause his death," states the report.

05/17/19: Fundraiser for Family Soars
The fundraiser for the family of a 14-year old boy brutally killed by dogs has now surpassed $42,000. It's stated goal was only $5,000. On May 9, Ryan Hazel was killed by up to four dogs at 2477 Maple Swamp Road in Dighton while their owner was away. There were 11 adult dogs on the property and 9 puppies. Four dogs -- one Dutch shepherd and three Belgian malinois -- were loose in an outdoor fenced area during the attack; the other dogs were caged at the time.

The property and four attacking dogs belong to Scott Dunmore, 49, who is a professional dog trainer and highly regarded in "Schutzhund," a competitive sport for protection dogs. Dunmore's website, 3 Dogs Running, states he is the "only decoy in the country to be certified in all four major dog sports (Mondio Ring, French Ring, PSA and IPO)." It is unknown what level of protection training the dogs that killed Ryan had. Dunmore has been cooperating with investigators.

During a news conference last week, Bristol County District Attorney Thomas Quinn III said that Ryan regularly cared for the dogs when Dunmore was away. Last Thursday, Ryan's grandmother drove him to the property at 6:00 pm and waited in the car while he completed his tasks. When he did not return in 45 minutes, she called his parents. His parents quickly contacted a neighbor to check on Ryan who found him suffering from "traumatic injuries" and called 911 at 7:59 pm.

Ryan's parents, Dennis and Jennifer, were in New York for American Kennel Club field trials when Ryan was attacked and killed by Dunmore's dogs. His parents are dog trainers and German shorthaired pointer breeders. The couple operates Wolf Plain Brooks Kennel in Rehoboth. Ryan was a student at Bristol-Plymouth Regional Technical High School where he played football and ran track, according to his obituary. His Celebration of Life will be held on Saturday, May 18. 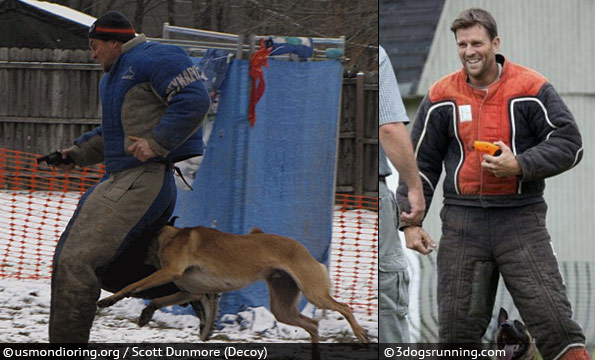 05/09/19: Teenager Killed by Pack of Dogs
Dighton, MA - A teenage boy is dead after being mauled by at least one dog. The Bristol County District Attorney's Office confirms that a 14-year old boy from Rehoboth was fatally attacked by dog(s) in the 2500 block of Maple Swamp in Dighton. Police responded to a 911 call about 8:00 pm. Police confirm they are investigating the boy's death as an apparent fatal dog mauling. "Multiple dogs" were taken into custody by animal control officials. No foul play is expected.

The Sun Chronicle reports the teenager was a student at Bristol-Plymouth Regional Technical School in Taunton. A press conference is scheduled for noon Friday at the Dighton police station. In news clips, one of the dogs removed from the home appeared to be a German shepherd. On Friday, NBC 10 Tweeted that a man who has done restoration at the home said he had observed kennels in the basement of the home and at least 15 "German shepherd looking" dogs.

WCVB reports that the teenager had been taking care of animals on the property. As many as 12 dogs, primarily German shepherds, were in the area where the victim was found, a source told WCVB. The contractor told WCVB that the owner of the property at 2577 Maple Swamp Road runs a dog training business -- about 10 to 15 dogs are "trained for police work." The technical school has activated its Crisis Response Team to assist students during this time of grief.

The teenager was later identified as 14-year old Ryan Hazel from Rehoboth. Hazel was watching the dogs for their owner, Scott Dunmore, 49 while Dunmore was in Boston, according to Bristol County District Attorney Thomas Quinn. The dogs were Dutch shepherds, Quinn said. The website, "3 Dogs Running," offers training by a Scott Dunmore in Boston, who has participated in AKC Obedience, Schutzhund (IPO), Mondio Ring, French Ring, PSA, and Dock Diving.

During the press conference, Quinn stated that Ryan took care of Dunmore's dogs and other animals on a "regular basis." On Thursday, Ryan's grandmother drove him to Dunmore's home and waited in the car while Ryan tended to the property chores. The grandmother told police that Ryan usually completed the chores in 30 to 45 minutes. After an hour passed, she became concerned and called his parents. His parents quickly contacted a neighbor to check on Ryan.

"The neighbor went onto the property at 2477 Maple Swamp Road. He eventually found Ryan lying on the ground in the rear yard suffering from traumatic injuries to various areas of his body. The neighbor also found four dogs in the yard and put them in the basement of the home. The remaining seven dogs are all believed to have been caged during the incident. The dogs that were outside were Dutch shepherds and a Belgian malinois. All 11 dogs were taken into custody ... by animal control and are being quarantined for up to 10 days ... The neighbor called 911 at 7:59 pm to report the incident and did attempt CPR on Ryan. However, the injuries he sustained were too severe and he was pronounced deceased at the scene by first responders. A full autopsy will be conducted..." - Bristol County District Attorney Thomas Quinn

Later clarifications stated that three Dutch shepherds and one Belgian malinois were involved in the fatal attack -- both breeds are routinely trained as police dogs. Dunmore is highly regarded in "Schutzhund," a competitive sport for protection dogs. In February, there was a house fire on his property. Dunmore had been living in a trailer on the property while the damage was being repaired. Police do not know when during the two-hour window (6 to 8 pm) Ryan was attacked.

In our 14-year data set of 471 dog bite fatalities (2005 to 2018), teenage deaths are extremely rare. Within the 10-18 years age group, there are only 7 victims and 5 victims fall between the ages of 10-12 years, which are "tween" years. There are only two teenage victims, a 13-year old and 14-year old. Dunmore had 11 dogs on his property. It is unknown what level of protection training the four dogs that killed Ryan had. Dunmore has been cooperating with investigators.

Ryan's death is the third death we have on record of a protection dog (trained in bite work) killing a person. The most recent involved a dual-certified police K-9 that broke out of its yard and killed a man. The 2.5-year old Belgian malinois was technically "retired" at the time, being in-between work gigs. In 2014, an IPO level 2 rottweiler, being spun as a "social protection dog with a switch," killed the trainer's 7-year old step-son when the boy took the dog outside to go to the bathroom.

At that time, Dutch animal behaviorist and author, Alexandra Semyonova wrote a 6-page response that explains: Bite threshold and bite inhibition, IPO bite work, Dogs with a "switch," Incompetent trainers, Breeding and other aspects about dogs trained for "personal protection" or police and military work. While the scenarios differ in all three deaths, two involved "experienced" attack trainers whose dog killed a juvenile. Readers new to this area may want to read her response.

Semyonova: The Tragic Fantasy that a Protection Dog Can Make a Reliable Family Pet

The GoFundMe for Ryan Hazel has already exceeded $27,000. Ryan's parents, Dennis and Jennifer Hazel, are dog trainers and breeders. The couple operates Wolf Plain Brooks Kennel -- German shorthaired pointers -- in Rehoboth, Massachusetts. His parents were in New York on Thursday for American Kennel Club field trials when Ryan was killed by Dunmore's dogs. 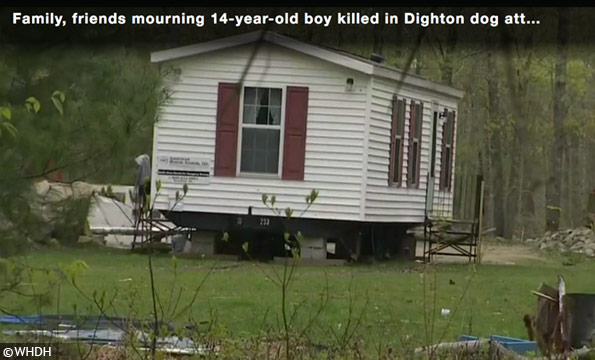 Scott Dunmore was living in a trailer on his property while his house was being repaired. 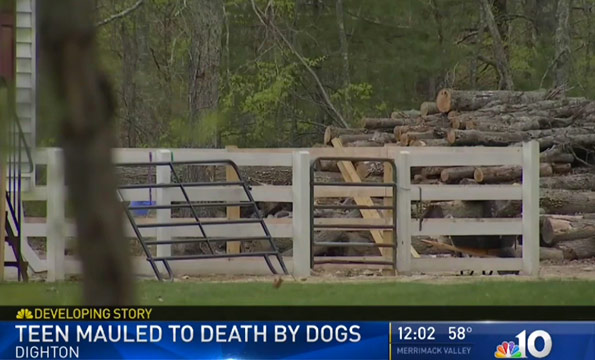 Property in Dighton where 14-year old Ryan Hazel was mauled to death by dogs Thursday.

Baseline reporting requirements:
Law enforcement departments across the United States should release consistent "baseline" information to the media and the public after each fatal dog mauling, including these items.
Tweet
Share807
Tweet
Share807
Donate Now