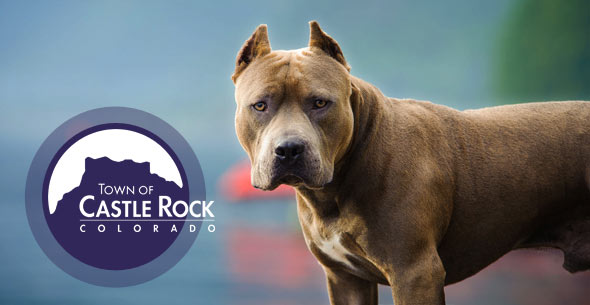 A special guest post by Kory Nelson as the City of Castle Rock, Colorado discusses repealing its 1992 pit bull ban. January 31 was the first public hearing for the proposed ordinance changes.

While the Editorial Board of the Denver Post had recently declared “Pit Bull bans are still justified” (1/29/2018), former local Denver KNUS radio show personality Krista Kafer was granted the privilege of having her opposing published by the Denver Post (“Castle Rock contemplates sensible change to pit bull ban”, 02/01/18). Ms. Kafer served as the senior expert on education policy at the Heritage Foundation in Washington D.C. before returning to Colorado in 2004 where she taught at the Colorado Christian University, while co-hosting an afternoon radio show with Steve Kelley. If a state school board was looking for advice on the options of school choice, I’m certain Ms. Kafer would be an excellent reliable source for policy determinations, but when it comes to public safety policies designed to protect the public from the most horrific forms of injuries and death known to domesticated communities, I would prefer Ms. Kafer, likewise, seek out the experts whose opinions and policies have been based upon reliable scientific evidence, tested and hardened through the fires of civilized combat in the one arena where Americans have always respected -- the American system of jurisprudence. Unfortunately, Ms. Kafer’s opinion rests upon her faulty research and reliance upon information provided by what is often referred to as “The Pit Bull Propaganda Machine”. All she does is suggest that the mothers and fathers of Castle Rock children should offer up their children’s flesh, scalps, limbs and lives on the “hope” that 100% of pit bull owners are responsible enough, and good enough, to train their dogs against their natural instinct. Two of the world’s best animal trainers, who had an endless supply of time and money, attempted to do exactly that with their dangerous animals -- but that ended disastrously too for Siegfried & Roy. How many children, senior citizens, domesticated pets, or livestock is she willing to forfeit?

In my legal career, I have individually reviewed and handled thousands of dangerous dog attack and bite cases -- more than any other attorney in the Rocky Mountain region. I have reviewed some of the most horrific fatal pit bull attack cases in Colorado. The last fatal dog attack in Denver occurred in 1986, when little 3-year old Fernando Salazar wandered from his home into his neighbor’s yard where their family pet dog was unattended while restrained only by a chain. When Fernando walked into the “Radius of Death”, the Pit Bull’s attack upon his small head and neck was quickly fatal. In 2003, Jennifer Brooke of Elbert County was literally torn apart by the three pit bulls who cornered her when she went out into her horse barn, leaving behind a blood-splattered crime scene as a testament to the battle she put up -- but also clearly showed it was a prolonged battle, which could have only been full of anguish and torment. I have also reviewed many fatal pit bull mauling cases in other states, consulted with the world’s leading certified animal behaviorists, and talked with hundreds of first responders, animal control officers, emergency medical personnel, medical doctors, plastic surgeons, veterinarians, victims, and the friends and family members of victims. I have had the privilege and honor of successfully litigating the policy issue of pit bull bans, presented legal seminars on the topic at national legal conferences, and have provided legal consultation to governmental entities across the United States and Canada on the topic.

The issue of public safety policy in relationship to “pit bulls” has one undeniable truth -- well written pit bull bans have a 100% success rate in the courts, with each and every case having the same exact ruling: Pit Bulls ARE more dangerous than other breeds of dogs, so government’s differential treatment of them is rationally related to the legitimate, and often cited as THE primary, governmental interest -- the safety of the humans the government serves. It is that amazingly consistent ruling, over and over again, that should be recognized for the ultimately significant reality -- This Truth cannot be denied by rational people. Therefore, with the danger being unique to Pit Bulls, and government acting within its primary purpose being reaffirmed as being “rational” -- only the question is by which manner should the government act.

The Level of Danger from Pit Bulls is Undeniably Unique

Ms. Kafer suffers from the classic misunderstanding that “aggressive behavior” presents the same level of danger -- so the only issue is the probability of “it” happening. However, the true difference between pit bulls and other breeds of dogs is like the difference between firecrackers and hand grenades -- the statistical probability of an accidental detonation may be incalculable, but the difference in potential damage makes one much more dangerous than the other. Pit Bulls were selectively bred for one purpose: Bull Baiting, and then dog fighting -- the desired behavior that are inherently and permanently engrained into this line of dogs are the following -- initiating surprise attacks on much larger animals, biting their head or neck area, “holding” that bite (refusing to release no matter what force or trauma is inflicted), and then shaking their head back and forth, causing the ripping and tearing of their victims’ flesh and blood vessels, causing them to bleed to death. When this behavior is suddenly triggered against humans, the Pit Bull “Bite, Hold and Shake” style attack can cause severe bone and muscle damage, often inflicting permanent and disfiguring injuries, including the loss of limbs, and a high proclivity of children being scalped, their head’s skin and hair being ripped off their skulls. Moreover, once a pit bull starts an attack, their tenacity, strength, and greater tolerance of pain inflicted by trauma results in the reality that the only way to stop these attacks is most often through the use of deadly force.

As the level of danger from Weapons of Mass Destruction (WMDs) is so high, the idea that public policy should focus solely on holding terrorists responsible AFTER they use WMDs is insane, as it surrenders the concept of preventing the harm for the speculation that the terrorists would be deterred by the fear of punishment. With a significant portion of fatal pit bull attacks where the victim is the innocent child, relative, or female companion of the dog owner -- there was absolutely no prior indication of the pit bull being aggressive -- no prior attacks, no prior bites, and on the date of the fatal attack, no growling/barking or other behavioral precursors of the pending attack. Pit Bulls have been selected bred for their suppressed behavioral indicators of their rising level of aggression, which gives them the advantage in the dog fighting ring -- but makes them incompatible as a domestic pet.

Every year, the world watches as trained judges evaluate dogs’ physical characteristics against written standards at the Westminster Kennel Club’s National Championships at Madison Square Garden in New York City. It is not difficult, as every Court has found. For example, “Pit Bull dogs possess unique and readily identifiable physical and behavioral traits which are capable of recognition both by dogs owners of ordinary intelligence...” -- Supreme Court of Ohio (Ohio v. Anderson, 1991). The Pro-Pit Bull Propaganda Machine (and those who are suckered by them) often tries to sow confusion and doubt through their use of two-dimensional photographs of dogs as an unfair trick -- a ploy -- what we call in logic a formal fallacy. This one is a “straw man argument” -- an informal fallacy based on giving the impression of refuting an opponent's argument, while refuting an argument that was not presented by that opponent. One who engages in this fallacy is said to be “attacking a straw man”. No reasonable expert would ever suggest evaluating a dog based upon photographs. Westminster judges don’t use photos -- why would anyone else?

In reviewing this unidentified groups’ document, it appears to have been written by a group who is attempting to mislead both the citizens of Castle Rock -- and their Town Council. Here are the key indicators:

Deputy Town Attorney Heidi Hugdahl’s legal team needs to stop whining about their pit bull law being “difficult” -- as the blame belongs on them. They simply are making it much harder on themselves than they need to -- especially in terms of their idea that they should obtain DNA tests. This is a false and artificial standard -- a red herring. There is no legal requirement for DNA testing, and there is no DNA genetic “standard” for breeds by which to obtain a comparison. The Colorado Supreme Court ruled in 1991 that Denver’s definition of “Pit Bull” was constitutional, and not unenforceable for being too vague, as “There is no constitutional requirement that legislation be written with scientific precision to be enforceable”. DNA is great for matching a suspect’s body fluid to a crime scene, but there is no generally accepted scientific basis to define a “pure” Pit Bull through DNA sequencing. No other jurisdiction I know would seriously consider taking on such a meaningless, expensive, and unnecessary burden in their enforcement policy and procedures. Their policy should change by stopping the use of DNA, and their attorneys should learn how to block the admission of any offered DNA evidence, as there is no sound scientific methodology involved in the determination of the standard by which any DNA sample is measured. So the changes in policy needed are simple ones that would make is easier to administer, while strengthening its enforceability.

Who Will Advocate for The Victims?

Who are the future victims? Will they show up to speak out to the Castle Rock Town Council? How can they, when they don’t know who they are? The Town Council, the Police Department, hospital emergency staff, and others need to speak up for those city residents who depend upon government to provide for their safety. Other good sources of information are national groups supporting victims, such as www.DogsBite.org and www.daxtonsfriends.com -- all these groups were started by victims and families of pit bull mauling victims -- who are extremely credible in their honorable efforts to pull together the overwhelming scientific evidence and judicial decisions that help educate the public and policy makers.

The Final Decision is Up to the Town Council:

In the popular 2015 movie, Jurassic World, actor Chris Pratt played the character Owen Grady, who trained four Velociraptors. In an important scene, Owen rides his motorcycle alongside the running Velociraptors, while they hunt another rampaging dinosaur. If you have seen this movie, did you ever trust Owen’s capacity to control those Velociraptors? Are you willing to bet your life, or the lives of those most precious to you on the capacity of any Pit Bull owner to absolutely prevent any attack by their mini-velociraptor? Will Castle Rock continue to be Family-Friendly, or will be it a “Jurassic World”, where residents and visitor alike run the unreasonable risk of being mauled by large, strong, tenacious animals who rip and tear their victims while they are still alive? There is absolutely nothing 100% unique about Pit Bulls that is positive that can outweigh the 100% unique dangers Pit Bulls present to humans, other domesticated pets, and livestock. Castle Rock Town Council needs to put human lives first. Beefing up Castle Rock’s municipal ordinances as to other breeds of dogs is a good idea, there just is absolutely no reason to revoke the pit bull ban -- but they can make it easier to enforce. They should start with making wholesale changes to their animal code enforcement personnel and city prosecutors who are failing to enforce the current pit bull ban in a meaningful and effective manner.

6 thoughts on “Castle Rock Should Change Its Pit Bull Policy”