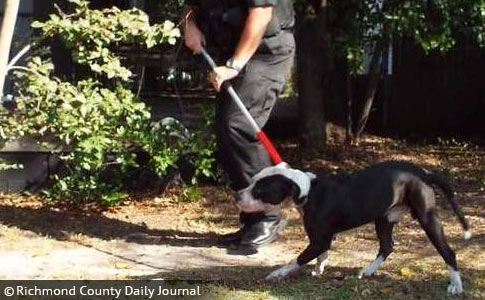 On Saturday, two dogs attacked and killed their owner in Hamlet, North Carolina.

Victim Identitifed
UPDATE 11/09/17: Hamlet Police have identified the dog mauling victim as David Robert Baber, 65-years old. On November 4, two of Baber's dogs, a male pit bull and mixed-breed dog, brutally attacked him in the backyard of his own home on West Hamlet Avenue. A 9-year old boy tried to stop the attack by throwing bricks at the dogs to no avail. He later told the Richmond County Daily Journal the dogs would not stop attacking him. "They bit his neck. He’s got a hole in it," he said.

Baber owned five dogs that he walked each morning. He could only walk them in pairs of two and could only walk his "energetic" male pit bull alone. According to the little boy's mother, April Parnell, prior to attacking Baber the same two dogs had been fighting earlier that day. Parnell said that Baber broke up the dog fight by inserting himself between the animals and throwing punches at the dogs. Hamlet Police continue to search for relatives of Baber to inform them of his death.

In 2015, two pit bulls belonging to Ricky Davidson viciously attacked 79-year old Kenneth Ford in Pahrump, Nevada. He died just over a month later while still hospitalized at University Medical Center in Las Vegas. Just before his death, Nye County was granted temporary guardianship of Ford and his estate because no family members could be located to oversee his medical care. It is presumed that Nye County ultimately took permanent guardianship after Ford's death as well.

11/06/17: Can't Locate Relatives
On Monday, Hamlet Police Chief Scott Waters said they still have not located any relatives of a man who was mauled and killed by his own dogs Saturday. The attack occurred in front of a 9-year child who tried to stop the dogs by throwing bricks at them. So far, investigators have checked with the Adult Services division of the Richmond County Department of Social Services, the Veterans Administration and Walmart, where the man had been employed before retiring.

"We’re running into a lot of obstacles" and may have to release the man’s name in order to find his relatives. - Police Chief Scott Waters

The little boy, named Kanorie, and his family live next door to the mauling victim. His mother, April Parnell, said her family and the man were close. He often walked her children to the bus stop in the morning and escorted them home after school. April said the man had a daughter who lived elsewhere, reports the Richmond County Daily Journal. Waters called Kanorie a "hero" for his brave actions Saturday. "I just thank God above that the dogs didn’t turn on him," Waters said.

11/04/17: Man Killed by Own Dogs
Hamlet, NC - A man is dead after being mauled to death by his two dogs, a black-and-white pit bull and another dog. The fatal attack occurred early Saturday afternoon in the owner's fenced-in backyard at 308 West Hamlet Avenue. A 9-year old child witnessed the attack and threw bricks at the animals, trying to get them to stop. “I threw bricks at the dogs to try and get them off of him,” Kanorie Parnell said. “Only they wouldn’t get off of him. They bit his neck. He’s got a hole in it."

By 1 pm, about 10 vehicles from first responders lined West Hamlet Avenue, reports the Richmond County Daily Journal. By 1:15 pm, officers captured the pit bull; it took longer to capture the second dog. At 2 pm, officer's removed the man's body. By 3:30 pm, Hamlet Police Chief Scott Waters said all of the dogs had been taken to the Richmond County Animal Shelter, reports the Daily Journal. Hamlet police are notifying next of kin and have not yet identified the victim.

Kanorie and his mother, April Parnell, live next door to the man. April said Kanorie was visiting the neighbor when the two dogs attacked and killed their owner. April also provided the names of the two dogs involved -- Little J and RJ. She said both dogs had been fighting earlier that day. April said her 69-year old neighbor broke up the dog fight by throwing punches at them, separating them. Later in the day, the same two dogs attacked their neighbor, she told the Daily Journal.

Although information is limited at this time, this case could involve rescue dogs or dog "collecting." The man had five dogs. He could only walk them in pairs of two and the pit bull alone. This could be an indicator of dog aggression by more than one of his dogs, though it could be strength-based too. The man is described as "small," possibly he could only handle two dogs at a time. Also, Little J and RJ, by their names alone, appear to be related (intentional or unintentional breeding).

Baseline reporting requirements:
Law enforcement departments across the United States should release consistent "baseline" information to the media and the public after each fatal dog mauling, including these items.
Tweet
Share280
Tweet
Share280
Donate Now