Province of Quebec is Set to Follow Montreal's Lead 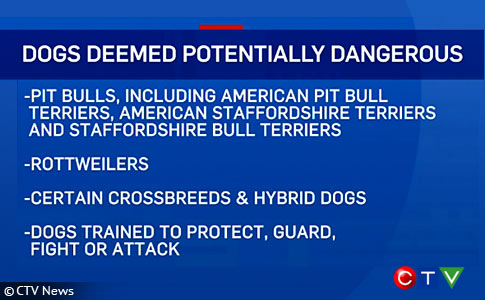 A Gradual Pit Bull Ban
Quebec, CA - Last week, Quebec Public Security Minister Martin Coiteux announced that pit bulls will eventually be banned throughout the province. The news comes after months of delays for the province's new dangerous dog legislation that began being discussed after the mauling death of Christiane Vadnais in Montreal in early June 2016. Since this time, the city of Montreal has enacted a pit bull ban. After winning an appeal, the ban went into effect on December 1, 2016.

"We have experienced a number of tragedies in Quebec due to attacks by specific breeds of dogs, particularly pit bulls." - Minister Martin Coiteux

The new legislation, Bill 128, designates pit bulls (American pit bull terriers, American Staffordshire terriers and Staffordshire bull terriers), rottweilers and their cross-breeds as potentially dangerous. Wolf hybrids and dogs trained to protect, guard or attack are included in the designation as well. Coiteux said the list could change over time. "That list may evolve in the future because the government will be able to use new statistics, new scientific literature, to update this list," he said.

Montreal Mayor Denis Coderre, an outspoken advocate for public safety and a powerful force behind Montreal's adoption of a pit bull ban, was delighted to see the province of Quebec follow Montreal's lead, reports CTV News. "I'm very satisfied. There was a pit bull ban to start, but it's about dangerous dogs too, it's not just based on the kind of breed," he said. Due to the highly publicized "breed-specific" parts, Coderre reminded that the bylaw covers all dangerous dogs.

CTV News also interviewed "dog trainer" John Truss of Montreal, who feigned having any idea as to why rottweilers -- the second leading killer in the U.S. -- would be on the list. "Why did they choose rottweilers?" he asked. Several countries, including Spain, include rottweilers on their list of potentially dangerous breeds, along with pit bulls and fighting breed derivatives. In the U.S., all major military divisions ban rottweilers and 7% of all breed-specific laws include rottweilers.

Vadnais family members have been pressing for a province-wide pit bull ban since Christiane's mauling death. Her sister, Lise Vadnais, told CTV News, "I'm very happy to see strong laws being introduced to promote citizen safety. It's a good victory for all citizens. It's satisfying to see the government recognize dangerous dogs." Like in Montreal, and nearly all jurisdictions that regulate pit bulls, existing owners will be grandfathered in, provided they adhere to specific requirements.

To further increase statistical tracking, the bill also requires physicians to "report the fact to the local municipality concerned without delay, and communicate the seriousness of the injury and, if known, the breed or type of dog that inflicted it," states the bill. Like in the U.S., not all jurisdictions within a state (or a province in the case of Canada) track breed of dog or severity of injuries after dog attacks. This requirement will enable better data collection across the entire province.

In July, the Association of Veterinary Doctors of Quebec (OMVQ) sent a report to the ministerial committee tasked with advising government officials about the dangerous dog bylaw. In early August, based on the OMVQ report, the ministerial committee advised officials in Montreal and Quebec to use a "case-by-case approach" instead of targeting certain breeds. "Pit bull" and "dog breed" were not even mentioned in the recommendations, reports the Montreal Gazette.

One week later, La Presse published a 5-part investigation showing how the OMVQ report omitted key parts of peer-reviewed medical studies -- specifically where doctors resolutely state that pit bulls were responsible for the most severe injuries. The OMVQ report also cited studies in their report, giving the impression of “scientific and objective,” but were funded by the well-financed American pro-pit bull lobby. The OMVQ report failed to mention this conflict of interest.

"The committee considering the legislation needs to take the veterinarians' report with a huge grain of salt, if not discard it outright." - Editorial Board, Montreal Gazette, August 15, 2016

After the La Presse exposé, which caused a significant backlash against the College of Veterinary Surgeons of Quebec who authored the OMVQ report, Montreal became even more embolden and committed to following through with a pit bull ban. It seems clear now that Quebec government officials studying a province-wide dangerous dog bylaw, namely Coiteux, were also resistant to the misleading OMVQ report and took the committee's recommendations "with a huge grain of salt."