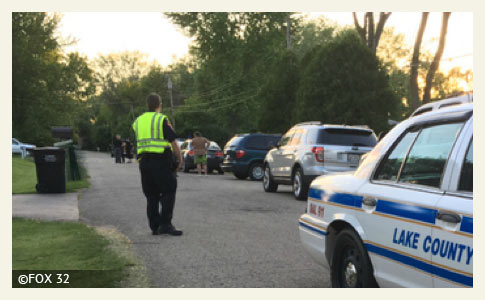 Police at scene where a 71-year old woman was found bitten and dead in Antioch.

Dead Before Mauling
UPDATE 06/08/16: An autopsy on the 71-year old woman found dead yesterday in her Antioch home covered in dog bites determined she died of a massive stroke before the family dogs inflicted severe bites all over her body. Deputy Coroner Orlando Portillo said Elizabeth Flood "was dead before the dogs got to her." Portillo said they are not releasing the number of bites that were discovered during the autopsy. The death of Elizabeth Flood is a post-mortem mauling case.

Previously, the Lake County Sheriff's Office said that Flood was mauled so badly, it would take dental records to positively identify her. Flood's 23-year old grandson arrived home after work at about 5:30 pm yesterday and found her dead inside a bedroom in the home. As we expressed earlier, post-mortem dog mauling cases are rare but do occur. It is unclear why, however, officials will not release the number of bite injuries, except that it might make dog owners uncomfortable.

06/07/16: Dog Mauling Suspected
Lake County, IL - A 71-year old woman was found dead in her home covered in dog bites. Authorities suspect the family dogs. An autopsy will be performed Wednesday. Her grandson discovered her body at their home on the 26000 block of West Channel Avenue after he returned from work at 5:30 pm, Detective Christopher Covelli with the Lake County Sheriff’s office said. The family dogs, a lab-chow mix and German shepherd had bitten her multiple times, Covelli said.

"The bites were very extensive, there were multiple bites all over the 71-year-old's body from her head to her toes." - Christopher Covelli

The woman was mauled so badly, the sheriff's department says it will take dental records to positively identify her, reports Fox 32. This is a red flag and may indicate she died before the mauling. Authorities also said there were no signs of a struggle for the victim. It is also unclear if both dogs were involved. The German shepherd, described as "calm" by a neighbor, was found wandering the area and the grandson indicated the attack was by done by a "dog" (singular).1

Just a month ago, a high profile "post-mortem mauling" occurred in Brownsburg, Indiana. Lola Endres, 61, an animal rescue advocate, was found bloody and dead, covered in significant dog bite injuries inflicted by one or both of her family dogs. Both dogs were English bulldogs. The Hendricks County Coroner later determined that all of the bites were inflicted post-mortem, thus none contributed to her death. Endres had a heart condition and suffered a fatal heart attack.

These cases are rare, but do occur. To have two cases so close together would be very usual.

1In the NBC Chicago video -- that posted just after we published -- Covelli stated, "She had been with the dogs home alone 'several' times in the past." That detail strongly indicates a fatal dog attack scenario.