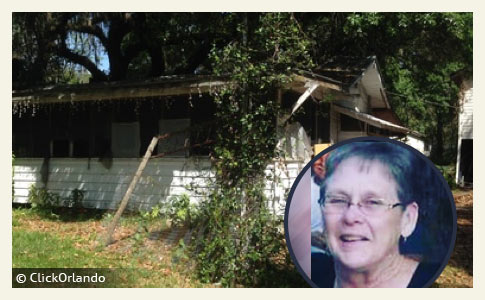 Home on South Street where Sonda Tyson, 66, was mauled to death by her dog.

Conflicting Reports
UPDATE 04/03/16: On Friday, the Daily Commercial provided details about previous incidents with dogs from the same home. In 2008, a reddish brown pit bull bit a child on the leg as she rode a bicycle. Her boots prevented any injury. In 2012, a 3-year old child tried to kiss the same dog and was bitten in the face. In 2014, a child at the home was bitten or scratched by a dog named "Hercules" after getting in the middle of two dogs playing, according to an animal services report.

The Commercial also added the detail that paramedics initially tried to block the attacking pit bull-mix by pushing a refrigerator into its path.

A report from News 13 on the same day states that family members said Sonda Tyson lived alone with her four dogs, including the attacker, a pit bull-bullmastiff mix named "Hercules." Tyson's son -- who lives next door -- found the dog when it was a puppy and gave the dog to his mother "for protection." Family members said the dog was never aggressive before. It is unclear if the "reddish brown" pit bull is the same dog as "Hercules," but certainly there were biters in the household.

To our readers who are grandparents or senior citizens, please do not ever accept a recognized dangerous breed from one of your children who makes a similar claim, "for protection." You see how it worked in this case? There have been other cases like this too, including senior citizens killed by their own "trained" attack dog. Tyson already had three dogs in her household, each capable of barking and scaring away potential intruders who already dislike homes with dogs.

This 66-year old woman suffered a horrific death at the jaws of a 100 pound pit bull-bullmastiff mix. This is an animal that Tyson never could have controlled. She never could have stopped it from attacking a postal carrier or a person walking down the street or from a child or friend visiting her home. She obviously could not stop the dog from attacking herself either. There was absolutely no reason for Tyson to ever have a dangerous animal like this and she paid the highest price of all.

04/01/16: Pit Bull-Mix Kills Owner
Leesburg, FL - Yesterday evening it was reported that Leesburg police shot and killed a large "vicious" dog covered in blood that was blocking access to a home, preventing first responders from entering to provide emergency medical assistance to a female victim inside. By the time paramedics reached the woman, she was dead. Today, Leesburg police Lt. Joe Iozzi identified the victim as Sonda Tyson, 66, and confirmed that her own dog viciously attacked and killed her.

"It was a pretty vicious attack and it was a pretty gruesome scene for everybody that was there." - Leesburg police Lt. Joe Iozzi

Due to the threat the aggressive dog posed, "it was immediately necessary to incapacitate the animal in order to provide for public safety and to allow medical personnel inside the location. An officer assigned with a patrol rifle positioned himself to stop the existing threat and to mitigate the possibility of collateral damage to anyone else," states a release issued by police. "A second shot was then necessary to render the scene safe, and to allow the medical personnel to enter."

"Preliminary results from the medical examiner indicate the death was caused by massive blood loss, resulting from the mauling," states the release. After next of kin were notified, investigators determined the dog belonged to the victim and she had acquired the animal as a puppy, according to the release. News agencies report the dog is described as a large brindle pit bull-mix dog in the police report. The deadly attack occurred at a residence on the 1200 block of South Street.

The Daily Commercial reports that police Lt. Joe Iozzi said that Tyson was found in a large pool of blood with significant flesh tears on the rear porch of the home. “It was a gruesome scene,” Iozzi said. A relative reportedly discovered Tyson on the floor and called 911. Lake County Animal Control was called out to the home at least once in the past, but it was not clear if the call was related to the same animal, Iozzi said. Residents of the home refused talk to reporters last night.

The Orlando Sentinel reports it was the victim's granddaughter and daughter-in-law who found Tyson critically injured lying in a pool of blood on the back porch. Amber Fletcher, her daughter-in-law, called 911. "She's bleeding everywhere, I don't know. Her bones are showing…" Fletcher told dispatchers. When asked where she was bleeding from, Fletcher said, "Her arms. You can actually see the bones in her arms. She has a bigger dog, so I don't know if her dog bit her."

The Sentinel reports it was the 13-year old granddaughter who made the grisly discovery. Fletcher told police that she had left the home earlier in the day to pick up her daughter from school. When the two arrived back at Tyson's home on South Street, the 13-year old rushed out to see her grandmother on the back porch and began screaming at the horrible sight. The article also states that the police officer who shot the dog with a rifle, did so positioned from the top of a fire truck.

11 thoughts on “2016 Dog Bite Fatality: Woman Mauled to Death by Her Pit Bull-Mix in Leesburg, Florida”