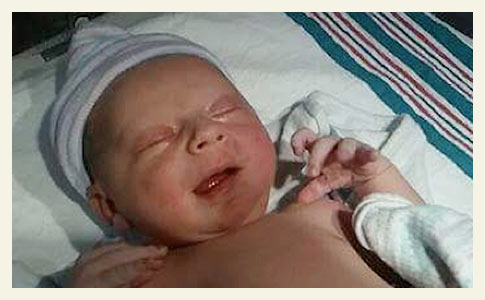 Aiden Jonathon Grim, 3-days old, died after being bitten by a family dog.

No Criminal Charges
UPDATE 02/09/16: No criminal charges will be filed in connection to the death of a newborn that was bitten on the head by a family dog and died, according to Youngstown police. The decision comes after the Mahoning County Coroner's Office ruled the manner of death as accidental. Virtually all dog attacks resulting in death are ruled as accidental; that fact alone does not dismiss criminal charges. About 21% of all dog bite fatalities result in significant or felony criminal charges.

For instance, after four pit bulls disemboweled a 4-year old boy in Detroit, the Wayne County Medical Examiner's Office ruled the manner of death as accidental. The owner of the pit bulls, Geneke Lyons, will soon stand trial for murder in the second-degree, involuntary manslaughter and possessing dangerous animals causing death. The manner of death identifies how the "non-natural" death arose. There are four types: accident, homicide, suicide and undetermined.

In the case of another baby's death, coincidentally also named Aiden (no relation), Dorchester County Coroner Chris Nisbet ruled the manner of death a homicide. Nisbet said parental neglect contributed to the 2-month old's death. In that case, the father left the infant in the living room all by itself while the father slept in the bedroom. The family's newly adopted dog dismembered and killed the infant while his father slept. This is not what occurred in Youngstown this past Sunday.

Not even remotely close. Thus, no child neglect charges.

After the death of 3-day old Aiden Jonathon Grim, Dr. Joseph Ohr, a forensic pathologist with the Mahoning County Coroner's Office explained: "At three days old the child's skull is very fragile and the dog's jaw was able to penetrate the skull, causing injuries to the brain and ultimately the death." Essentially, the dog picked up the child by the head and its teeth punctured the infant's soft skull causing brain injuries and death. Dr. Ohr did not characterize the bite as a "mauling."

In an earlier report by WFMJ today, the report stated, "the brother of the infant's mom is the owner of the dog and would like to have it returned." This was excluded in the afternoon update and restated as, the dog's "possible return remains uncertain and still under discussion." The fact that the brother wants the animal back compounds this tragedy much further. It also speaks volumes about the dysfunctional nature and people within that household. May Baby Aiden rest in peace.

02/08/16: Additional Information
In a heart wrenching evening update, the baby's mother, Kristy Grim, told WFMJ that she and the baby were sleeping in the living room that morning. The infant was lying on a blanket inside a plastic laundry basket that was on the floor. Grim was lying next to him sleeping on the couch when she woke up to the baby screaming and covered in blood. The 21-year old mother said she saw bite marks on the newborn's head and she knew the dog had bitten the helpless baby.

While it is jarring to learn the baby was sleeping in the laundry basket, it is more jarring and relevant that the dogs used these baskets as beds.

Grim said the dog "was never aggressive before; he never did anything like that." The dog that attacked the baby was described as a "mix-breed shepherd" and was one of five dogs in the house. Four of these dogs appear to be related in various Facebook photos, each being golden and brown mixed-breeds. Earlier, Grim said it was her brother's dog that attacked. Regardless, as stated already by one commenter: "Five dogs in a house and a newborn. What could go wrong?"

02/08/16: Newborn Dies After Dog Bite
Youngstown, OH - Police are investigating the death of a 3-day old baby boy that was bitten by a family dog. Officers were called to a home on the 3500 block of Valerie Drive early Sunday and found the infant on a bed with a head injury. The baby's 21-year old mother, Kristy Grim, was next to the baby and in tears. Grim's brother and grandmother where also home at the time of the attack, according to police. Emergency medical first responders determined the newborn had died.

“The baby was here in the basket, and I woke up, and it was horrifying. He was ... His head was just covered in blood.” - Baby's mother, Kristy Grim

Grim told 21 News that she left her baby on the floor and fell asleep on the couch. When she awoke, her baby was crying and his head was covered in blood. Grim said she wiped off the blood and called 911. The Mahoning County Dog Warden seized the dog described as a mixed-breed. Four other dogs remain in the home. Lt. Doug Bobovnyik of the Detective Bureau said the injury was not severe, but that it was a "noticeable injury." The coroner will determine the cause of death.

Before Grim deactivated her Facebook page, several comments were captured. In one comment, she states the dog belonged to her brother. "Yes, he bit the baby, my brother's dog. And now they're putting it to sleep," Grim wrote. In another, Grim states the dog is not a pit bull. "I know people who have pit bulls around their newborns at least the dog wasn't a pit bull," she wrote. Grim also said that she was waiting on a crib. "I had everything for him besides a crib because a few months ago I was told I would receive a free crib so I did not bother buying one," Grim wrote.

Also, as usual, some people are attacking the young mother on Baby Aiden's GoFundMe page, blaming Grim for the baby's death. Another is calling her a "pos mother" because she had not yet gotten a car seat for the newborn. There is also focus on the makeshift crib the baby was laying in. It is being described as a small basket or laundry basket -- it is unknown which is true. Police must wait until the coroner determines the cause of death before deciding if charges are warranted.

Facebook photos do show the dogs (described as siblings) using the laundry baskets as beds. 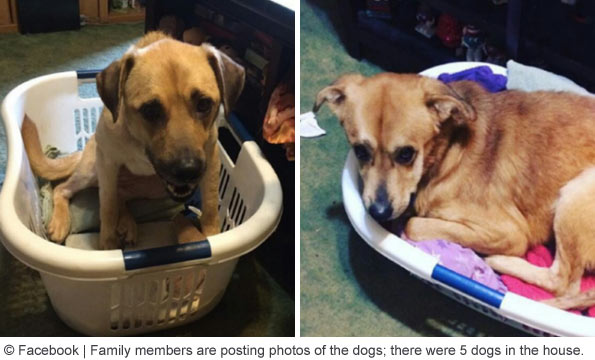 20 thoughts on “2016 Dog Bite Fatality: Newborn Dies After Being Bitten by Family Dog”