Asks: If States and Cities Can Have BSL, Why Not State Parks? 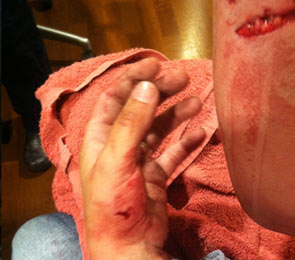 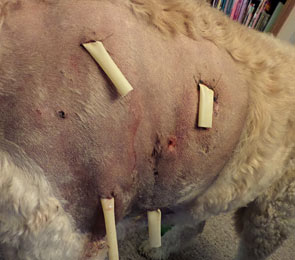 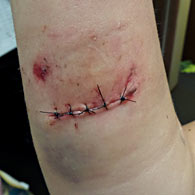 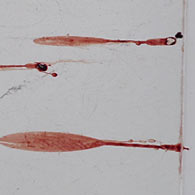 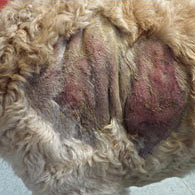 Michigan - A woman recently emailed us parts of her attack story, both she and her Goldendoodle were viciously attacked by a
pit bull while visiting a state park. She was with her husband and friends sitting around her fire pit at her campsite when the pit bull suddenly appeared. She said she would have posted her
photos to her own Facebook page, but "Amazingly," she wrote, "my friends
and family have already been cruel enough in defending the
'friendliness' of pit bulls."

We were sitting around OUR fire pit on OUR lot at a state park when the pit bull quietly came onto our lot. He walked between all of us and the fire pit, passed my dog, turned around, stood in front of him for a second then attacked him. It was HORRIFIC. He brought him down and my dog went submissive, got several wounds on his stomach. Then the pit bull dragged him by his head. When I tried to save my dog, he came after me.

Afterward, I tried to find out why they weren't banned from such a family friendly place (A STATE PARK CAMPGROUND!!!) and they said they could not ban a specific breed. People can't believe a little 35-40 pound pit bull could bring down my 110 pound Goldendoodle. They certainly can, instantly!

My attack never made the news because the police weren't called. I wish it had made the news, people should know that these monsters are allowed in campgrounds filled with children! If it were an hour earlier, there would have been 2 year olds sitting in little chairs around the fire ... it could have been THEM in the jaws. - Goldendoodle owner

Her writing is so immediate and jarring -- exactly how these attack occur -- that we asked if she would share more with DogsBite readers. What follows is an extended account of what happened based on a series of follow up questions that we asked. Like most people, until that night at the state park campsite, she could not have imagined what such an attack entails. Underlined text portions (our emphasis) indicate that these areas are discussed at the bottom of this blog post.

What happened after the attack?

After the dog let go of me, I felt the blood gushing in my jacket and took it off. I had no idea how badly I was hurt. Everyone started scrambling for a towel because the blood was just gushing out. I, however, was trying to get my dog into the camper because I did NOT KNOW if the pit bull was secure, I only knew he let go of me. My husband managed to secure the dog by looping MY dog's leash around its neck and holding it between its legs. There was blood all over the camper door from me trying to take care of my dog. Everyone was telling me not to worry about my dog and that I had to go to the hospital NOW! My husband grabbed me and put me in the car before I even knew how badly my dog was hurt. I had him call about 6 times from the hospital to check on his injuries.

The owners showed up after we got in the car and headed to the hospital. That was about 10:30 pm. All they said was: "That's my dog, I'll take him." They NEVER asked WHAT HAPPENED or if anyone was hurt!!!! - Goldendoodle owner

What happened at the vet?

I don't get out of the hospital until after midnight. We brought our dog into the local vet the next day, which was a NIGHTMARE. The desk clerk was really nice when we got there and asked what happened. We waited forever to get in. They shaved him, cleaned out the wounds, and gave him some antibiotic pills. We didn't realize how bad it was until he was shaved. Our vet bills total over $400. My husband had gone to run an errand and while I was waiting for him in the waiting room, a lot of other dog owners coming in SAW my dog and of course asked "WHAT HAPPENED?"

At the time I was trying to be discrete and only said "He was attacked by another dog". And EVERY SINGLE PERSON asked "What kind of dog?" So I told them. None were surprised and most said "of course." As I was re-telling the events to about the 3rd person, the desk clerk, who had been SO friendly when no one was there, told me "You can go wait in that room over there!" I got the feeling she was upset that I was telling people about this HORRIBLE PIT BULL!!! I had to go sit in a separate room so that people coming in wouldn't see me and hear what happened!

Luckily, my husband pulled up right after she said that, so I just glared at her and headed out the door. I wasn't educated about pit bulls at the time. I had watched Cesar Millan and heard how "it's all how you raise them" until my attack. After almost witnessing the death of my dog to the pit bull, I educated myself and have been trying to educate others. Getting a lot of backlash from friends and even FAMILY members. - Goldendoodle owner

Reaction to the incident report?

The incident report states that their dog had some "bite marks" on the top of its head. Those are not bite marks. That dog was being kicked and hit in the head with a camp chair. My dog never got a bite in! He rolled over in submission almost immediately and the pit bull bit him in the stomach!!

Also, "(the owner) stated that (the pit bull) likes people but doesn't like new dogs." So, bring him to a state park which is known for having a lot of dogs and kids and then don't keep your eye on it? Let it wander off your site at 10:30 pm and not even notice, even when blood-curdling screams are coming from a few streets over? By the way, I don't think this dog should be around people either!
- Goldendoodle owner

How is your world and life today?

I have started writing a letter to the Department of National Resources headquarters about banning dangerous dogs from the state park. They said it can't be done, but if countries, states, and counties can have BSL, so can state parks!

MY PTSD is so bad, I can't go for walks, I practically RUN in and out of my house to get me and my kids into my car, and EVERY. SINGLE. TIME. I am outside, I am looking everywhere for a pit bull. I don't let my kids play outside because I saw someone walking a white and black pit bull down our country road. Scenarios run through my head about them coming after me, my children and my dog. I have nightmares EVERY NIGHT about them coming after my kids. The emotional damage from this attack far outweighs the physical damage done to me and our family pet! - Goldendoodle owner

We thank this Goldendoodle owner so much for sharing her important story! Our hearts go out to her and her dog. Her sharing this story will prevent new attacks and inspire new advocates. Thank you so much! Below is a photo of her dear Goldendoodle before being mauled by a pit bull. 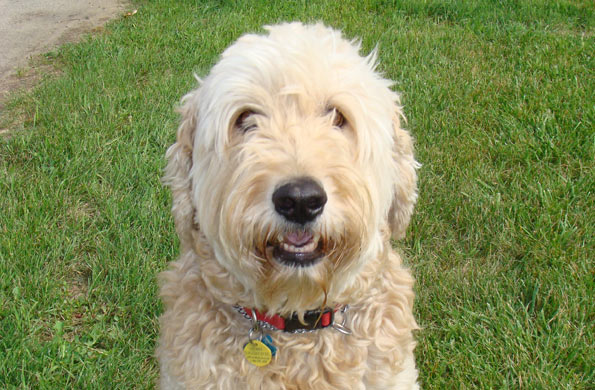