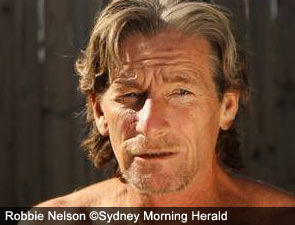 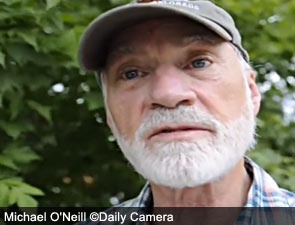 Please click an image to play the video. From left: Robbie Nelson and Michael O'Neill.

DogsBite.org - On the third day of Canine Victims Awareness Week, we have selected two powerful videos of adult men who survived a life-threatening dog attack. Robbie Nelson, 49, of Sydney, Australia had such severe chest injuries from the attack that arriving paramedics could see his heart through his wounds. Michael O'Neill of Nederland, Colorado speaks frankly about sinking a knife into the attacking pit bull to stop the animal from ripping out his femoral artery.

Each of the videos touches upon the unexpected nature of the attack and the tremendous violence of it. Both videos involve loose aggressive pit bulls in public spaces, demonstrating that these attacks can occur at nearly any time and anywhere. Robbie had been jogging in his neighborhood and Michael had just finished hiking when the attacks occurred. We have chosen to highlight adult victims and parents during this week because they often receive less attention from the media.

The vivid and personal account by Robbie Nelson will leave many readers feeling vulnerable to a vicious attack. Robbie was savagely mauled by three pit bulls while jogging in his neighborhood. It started with just one pit bull and then he realized -- as if in a dream -- there were two more. He recounts his attack as if still in a dream-like state, the very way many victims experience a violent dog attack in real time. He even talks about the "serenity" that sets in when close to death.

Robbie also talks about his emotional injuries, but as if he does not know that he is describing Posttraumatic Stress Disorder. "I have visions when I fall asleep of them attacking me, you know like the actual reoccurrence of what happened? And I still lay there trying to figure out why, looking for some sort of answers," he said. "It's really, what's the word for it? Put my life in a different stance, a different approach? It's strange," he said, "like a bad wake up call that you didn't want."

I felt like a bump on the left-hand side of me and I looked down and saw one dog, a pit bull. I thought she was playing around then I realized she had my left hand in her mouth pulling me back … My brain did not fathom what was going on … I did not even know there were two other dogs, another one latched onto this side of my arm and … Now one had each of my arms … They were trying to pull me down and I knew if I went down I was in big trouble … I couldn't tear my arms out of the dog's mouth because it already had chunks -- I could see the meat coming off my bones … There was a moment there where the pain was like a 'serenity' type of thing? I don't know, I was on my way to passing… - Robbie Nelson

Michael O'Neill and his wife were just finishing a hike in the forest north of Nederland when a pit bull suddenly flew up over the hill in a "flat-out sprint," knocked him to the ground and began ripping into his flesh. "It's not that he nipped me. It's not that he bit me. He mauled me," Michael said. "He tried to kill me, and that's a whole different thing." He spoke to the Daily Camera a month after his attack because he wants people to understand that pit bulls are a dangerous breed.

"I feel like I have a responsibility to the community," he said. What is uncommon about Michael's attack is that he was armed with a knife and was able to defend himself. He saved his own life. Part of the PTSD that victims experience after a violent dog attack is that they could do nothing to stop the dog. The massiveness of this vulnerability, which Michael mainly escaped, is haunting. "There's only one thing that saved me," Michael said. "I had a knife and knew how to use it."

There is no question in my mind that the dog was intent on killing me. From what the doctors tell me, that bite right at my femoral artery, if she had managed to rip that out, there is no question that I would have bled out. Last year, I lost my dog to a big cat, we live up in the mountains. Since that time, when I go out in the forest country, I have carried a knife with me -- ready to defend myself in the case of a cat attack, I never expected to have a dog attack ... As he was ripping at the area over my femoral artery in my leg, I was able to sink the knife into him pretty deeply ... From everything I understand, pit bulls are not easy to give up their bite once they have something in their mouth. I was fortunate... - Michael O'Neill

Many more videos of victims sharing their histories are located on the Victim Videos page. 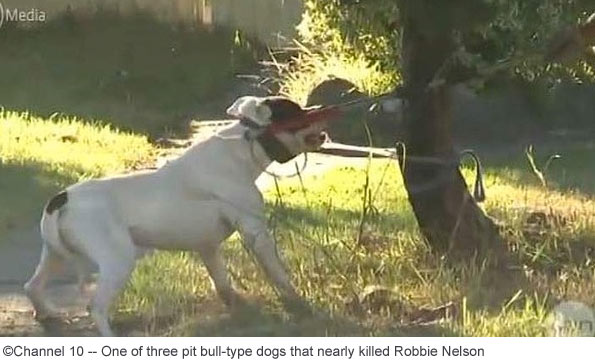 One thought on “Video: Two Men Share Their Stories of Surviving a Life-Threatening Dog Attack”