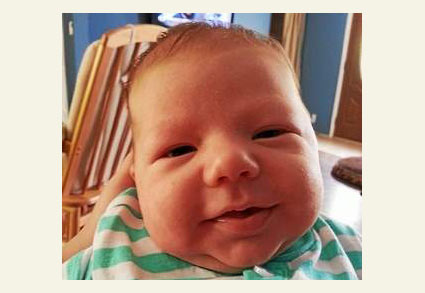 Victim Identified
UPDATE 06/11/14: Holden William Garrison of Davisburg died Sunday morning after being viciously attacked by his family's dog. At the time of the attack, the baby's uncle was holding the child while on the couch with his mother sitting nearby. The dog suddenly jumped up and latched onto the infant's head and throat. The child's father "pried the dog's jaw open" to free the baby. The child died after being transported to two hospitals. The dog is being euthanized today.

The boy’s funeral service will be held at 1 pm on Friday at Coats Funeral Home in Clarkston.

06/09/14: Cause of Death Ruled
The fatal attack occurred in the unincorporated community of Davisburg. Oakland County sheriff's deputies responded to a home in the 8000 block of Tindall Road, where they found the boy's father preparing to take his 10-week old son to the hospital. Deputies immediately began giving the baby CPR. The Springfield Township Fire Department transported the child to Genesys Regional Medical Center. He was then airlifted to Royal Oak Beaumont, where he died.

The Oakland County Medical Examiner’s office ruled the cause of death as multiple head trauma and the manner as accidental. According to Oakland County Animal Control Administrative Supervisor Sgt. Joanie Toole, the 3-and-a-half-year old dog, named "Precious," is currently in quarantine. Despite earlier reports, Toole said the owners have not yet released custody of the "Catahoula cattle hound" to animal control. If custody is surrendered, the dog will be put down.

The Clawson Patch states that the dog belonged to the child's 18-year old uncle, who had been holding the child on the couch. The uncle had been "staying with the family temporarily," according to deputies. Also sitting on the couch when the dog attacked was the boy's mother. Both she and her brother tried to fight off the dog and screamed for the child's father to help. The father received multiple injuries requiring stitches after "prying open" the dog's jaws to release the baby's head.

The brother told deputies he was holding the baby when the dog jumped on the couch and the brother pushed it away. The mother sat down next to the brother and the dog then jumped on the couch and began biting the infant’s head and throat area. The mother and brother began fighting with the dog and screaming for the father. The father responded and put his hands inside the dog’s mouth to pry the dog’s jaws open. - Mike Martindale, The Detroit News

06/09/14: Family Dog Kills Infant
Springfield Township, MI - In developing story, a two-and-a-half month old boy was viciously attacked and killed by his family's "Catahoula cattle hound" on Sunday. At the time of the attack, the baby's 18-year old uncle was holding him on the couch. The dog tried to jump on the couch, but was pushed away. The dog jumped up again, this time attacking the baby's head and throat. His 26-year old father "pried the dog's jaws open" to free his son and also sustained injuries.

What's a Catahoula cattle hound readers might ask? This depends. There is the Catahoula bulldog, Catahoula bullterrier, Catahoula pit bull and the Catahoula leopard dog (cattle dog). Take your pick; only the last qualifies for the AKC's Foundation Stock Service (FSS), which are ineligible for AKC registration. Are pit bull-mix dogs mislabeled as Catahoulas?" Yes, primarily those with merle coloring. Authentic Catahoulas (AKC example), obviously cannot be mistaken as pit bulls.

Can you find the authentic Catahoula in these Petfinder images labeled as "Catahoula-mix?"