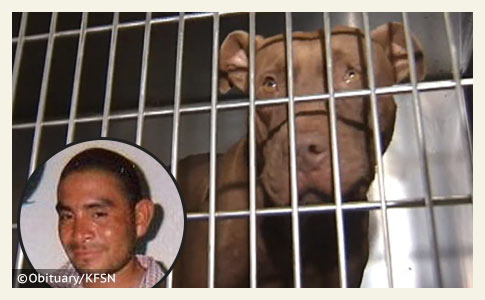 Esteban Alavez, 34, and one of the four pit bulls that mauled him to death.

Victim Identified
UPDATE 12/14/12: The Fresno County Coroner's Office has identified the man who was mauled to death by four pit bulls on Tuesday. Esteban Alavez, 34-years old, of Selma, California died due to multiple dog bites, including a bite that punctured his jugular vein, according to Fresno County Coroner David Hadden. The Thomas-Robinson Funeral Home website obituary states that he was a Farm Laborer. Rosary will be prayed on Wednesday at 6:30 pm at the funeral home chapel.


12/13/12: Backyard Breeder
An autopsy confirmed that the unidentified Hispanic man was mauled to death by dogs. The Fresno County Coroner's Office said the man died due to multiple dog bites. Authorities believe four pit bulls are to blame. A total of 12 dogs were seized from the owner's home, including 7 pit bull puppies about 8-10 weeks old. One neighbor, in fear of retaliation from the owner of the dogs, did not go on camera, but believes the same dogs killed her pet boxer last month.

"We didn't want to cause any problems and stir up any more problems, we just took him to the vet and he didn't make it."

Now a man has lost his life in one of the most brutal ways possible -- bitten, ripped and torn apart by a pack of pit bulls. Another neighbor said the dogs killed his dog just 10 days ago. The coroner's office is trying to locate the victim's family before releasing his identity; the victim may be from Mexico. The Fresno County District Attorney's Office will determine if charges will be brought. Also, the woman who discovered the victim's body is a relative of the dogs' owner.

12/12/12: Four Pit Bulls to Blame
The Selma Enterprise reports the victim was mauled to death by four pit bulls in the driveway of a Selma-area home Tuesday night, according to the Fresno County Sheriff’s Office. Detectives worked the case late into the night and are still trying to identify the victim. Deputy Chris Curtice, spokesman for the sheriff’s office, said a woman turned into the driveway of her home on South Highland Avenue when she discovered the body of a man lying on her property.

She got out of her car and after seeing that the man suffered obvious "traumatic injuries," she ran next door, where it is believed family relatives live, Curtice said. Homicide detectives reported to the scene on Highland. Detectives quickly determined what happened. Paw prints were all around the body, Curtice said. Authorities located four pit bulls at a nearby residence, where they found blood evidence on the dogs, Curtice said. The dogs were taken to Liberty Animal Control.

12/12/12: Man Found Dead
Fresno County, CA - In a developing story, on Tuesday evening Fresno County sheriff deputies began investigating the death of a Hispanic man mauled to death by a pack of pit bulls. Just after 7 pm, the man was found dead on the lawn of a home on the 12000 block of South Highland. Deputies found a number of dog tracks around the body and followed them to a home in the area. Deputies said the dogs still had blood on their mouths. Animal control seized the dogs.

Photos of the dogs first appeared in September 2014 (abc30.com), after the criminal trial.