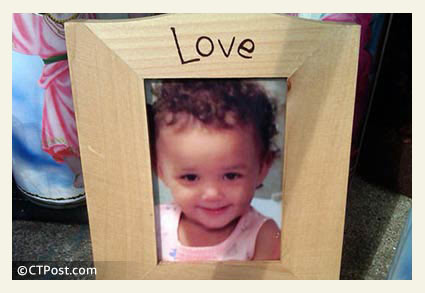 Pit Bull Owner Charged
UPDATE 12/22/11: The Hartford Courant reports that the owner of three pit bulls that mauled to death Nevaeh Bryant has been charged with criminally negligent homicide, first-degree reckless endangerment and risk of injury to a minor, according to police. Erica Hobdy, 30, of 127 Leete Street, was the baby's aunt. Hobdy left the child in a room away from her pit bulls then walked to a nearby store. In this time, the pit bulls "somehow" got out and attacked and killed the little girl.

10/06/11: Pit Bull Owner Being Sued
Erica Hobdy, the owner of three pit bulls that fatally mauled her niece last week, is being sued by a postal worker for injuries inflicted by a different pit bull. Ronald Diotalevi filed a civil complaint against Hobdy in 2009 after a pit bull allegedly owned by her bit and injured Diotalevi’s arm and leg while on the job, according to the filing. At the time of the dog biting incident, Diotalevi was delivering mail to an Ansonia address where Hobdy previously lived and also kept pit bulls.

Diotalevi's attorney, Alphonse Balzano Jr. of New Haven, said yesterday, "My heart goes out to the family" affected by last week's attack. He added that Hobdy has not attended court meetings and that another hearing is scheduled for October 12. The lawsuit seeks $15,000 in damages. Also named in the complaint is Marylin Primrose who leased the apartment to Hobdy. The veteran owner of "biting pit bulls," Erica Hobdy, did not return a message for comment Wednesday.

10/04/11: Child's Family Devastated
According to the child's great grandmother, Dolores Leonard, the baby's mother, Samantha Leonard, 20, left the child with her aunt at the home on Leete Street. "She was put down for a nap and for some reason, the aunt left her and was going out when she realized she left her pocketbook in her bedroom." The aunt sent her 10-year old son to get the pocketbook. "He went into the room where his mother had put the pit bulls, but didn't shut the door behind him," she said.

"It was just a horrific act. It was so careless to leave her alone that way," Leonard said.

It was not the aunt, Erica Hobdy, who found the toddler on the floor after the fatal dog attack either; it was a downstairs neighbor. In a pitiful video by the New Haven Register, Hobdy tells viewers, "Something just happened. We don't know what happened." The medical examiner's office ruled the child's death an accident, but authorities continue to check records to see if police or the city's animal control officer had previously received complaints about Hobdy's dogs.

10/02/11: Claim: No Prior Aggression
New details about the fatal pit bull mauling in West Haven were released over the weekend. Nevaeh Bryant had been visiting her aunt when the fatal attack occurred. The aunt, who did not provide her name, is the owner of the three pit bulls. The aunt was asked if her dogs had ever shown aggression before and she shook her head "no." The New Haven Register, however, reports that neighbors have told police that the dogs have behaved aggressively in the past.

Page two of the article sums up the likelihood of the Aunt's story. Police officers had to use catch poles to remove the pit bulls from the home and taser guns in order to subdue them. Sgt. Angelo Moscato said that officers did a "professional job in capturing the three aggressive dogs." Furthermore, due to the severity of the attack and "aggression" of the dogs, the animals were euthanized that night. Police continue to investigate. More information is expected in a few days.

09/30/11: Dogs Humanely Euthanized
West Haven, CT - In a developing story, police have confirmed that a 20-month old child was killed after being attacked by pit bulls in an apartment on Leete Street. According to Sgt. Angelo Moscato, a call came in just after 6:00 pm reporting that a toddler had been bitten by a dog. Paramedics arrived to an unconscious child, who was pronounced dead at Yale New Haven Hospital. The pit bulls involved were euthanized immediately due to the "severity of the case."

The New Haven Register offers more details, including that the toddler "was visiting" the third floor apartment on Leete Street when the pit bulls attacked. During the visit, three dogs were placed into another room, but "somehow" got out and found the child laying on a blanket on the floor in another room. Police confirmed that the tenants owned the dogs, but their relationship to the child was unclear. Police continue to investigate; autopsy results are expected in a few days.