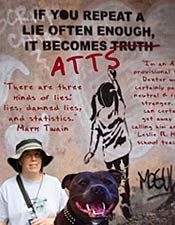 DogsBite.org - Since August, The Truth About Pit Bulls blog has dispelled several myths disseminated by pit bull advocates to distort the truth about pit bulls, including the Bloodhound and Nanny dog myths. On New Years Day, the site released a post about the American Temperament Testing Society (ATTS). Though ATTS test result data is not based upon a scientific random sampling of any dog breed, pit bull advocates use the misleading data to support their cause.

The detailed post touches upon many aspects of the ATTS temperament test, including: The history of the test, the test requirements, what the test involves, how the test is evaluated, criticisms of the test, why it's junk science, and examples of pit bull owners who acknowledge the test's biases. In a nutshell, and as pointed out by the writers, evaluating these areas shows why a dog breed responsible for roughly 50% of all fatal attacks can score better than Lassie.

We encourage readers to review the full post. There is no other thoughtful analysis of the ATTS on the Web with an emphasis on the pit bull community. If you are already aware of the test and how pit bull advocates harness it to advance the Safe Pit Bull cause, the post serves as an excellent refresher. For instance, the test was originally designed to test working dogs for jobs such as police work (schutzhund) and favors bold, assertive dogs over shy ones.

The post also references Carl Herkstroeter, President of the American Temperament Test Society, who said: "Just because a certain percentage of dogs in a certain breed fail, this does not necessarily indicate aggression. Dogs fail for other reasons, such as strong avoidance. If you look at our statistics just from a perspective of aggression or non-aggression, they can be very misleading." He added that 95% of the dogs that fail do so because they lack confidence.

After reading the post, you will understand why a person even with minimal understanding of critical statistical analysis who utilizes ATTS test result data in debates concerning the adoption of a pit bull ordinance would be guilty of fraud. The only persons who buy into the misleading data -- in that the pit bull's pass rate indicates a non-aggressive dog breed -- have a preconditioned bias in favor of pit bulls. The ATTS testing data does not support this position.