On March 13, 2010, Jere Alexander, the former Director of the Fulton County Animal Shelter, posted another dogfighting embroidery image to Pit Bull Patriarchy, a website that she contributes to under the name Spotted Dog Farm. She also posted the image to her own blog. Alexander was forced to resign after an investigation by Fox 5 News showed her making questionable decisions regarding shelter pit bulls, her own pit bulls and her links to dogfighting.

After the Fulton County Animal Shelter scandal, Alexander applied for and received a grant from Emory University for "Stitch 'Er Up: Dogfighting Embroidery." It is unknown why anyone could receive a grant for the expressed purpose of romanticizing dogfighters and fighting dogs of a bygone era (See the real: Your Friend and Mine and Honeybunch1). She even depicts the mating of Fanny and Redboy, which produced the infamous Bailey's Bingo.2

Dogfighting is a violent and illegal bloodsport. There is no form or function in "romanticizing" this blunt truth.

Brief History of the KKK and Dogfighting

One cannot discuss the meaning of Alexander's "After the Parade" image without first discussing the interwoven history of the Ku Klux Klan and dogfighting. In a 2005 online forum hosted by Best Friends, Merritt Clifton, editor of Animal People, does just that. Please review Clifton's discussion in full (See: Racism and Pit Bull Terriers). He powerfully describes the historical and present racial issues involved in dogfighting and the history of the pit bull.

"From [1905] until the early 1980s, dogfighting was almost exclusively a fundraising activity of the Klan and Klan splinter groups, along with cockfighting and pigeon shoots. As recently as the early 1930s, Klan chapters would openly advertise dogfights, cockfights, and pigeon shoots. As overt racism became less and less respectable, along with cruelty to animals, the ads became more discreet..."

"If the Imperial Grand Wizards of the Ku Klux Klan had devised a plot about then to do the maximum possible damage to Afro-Americans, they could not have concocted a more diabolical scheme than to introduce dogfighting to black inner cities.

With the proceeds from dogfighting in decline for generations, there was no longer any reason to keep it as an exclusive franchise, while unleashing pit bull terriers amid crowded housing projects and multi-family small framehouses full of little kids was a surefire way to kill and maim many more children, faster, than the Birmingham Bomber ever dreamed of..."

"While there are human victims among all classes and ethnic groups, Afro-Americans, especially Afro-American children, have suffered most.

Failing to fully integrate the Afro-American community into humane work during the 20th century, after a promising start in the 19th century, was the first great dereliction of duty toward Afro-Americans of the U.S. humane movement.

The second was failure to keep dogfighting from spreading into the Afro-American inner city, from the most racist niches within white America..."

Let's first start with the title. Klan members were the most visible to the public during their parades. "After the Parade" suggests a lack of this presence. It may also represent modern times. Thousands of Klansmen no longer march down our streets. Moreover, white supremacists are currently feeling besieged and threatened with an African American serving as the president. In this light, the title might also reflect the current state-of-mind of such groups.

The central colors of the image are white, red and black, the same colors that make up the Klan's current logo, which consists of four connected K's and a "Christ blood drop" in the center (The "Christ blood drop" is historically inaccurate; it was adopted during the 2nd Klan,3 1915-1944, for propaganda purposes). The dog depiction is all white except for the logo, much like the Klan's ceremonial robe. The shapes around the dog suggest large teardrops.

The hanging of the pit bull is emphasized by a loose rope that is not stitched into the fabric. What goes hand-in-hand with the Klan is the lynching of thousands of innocent African Americans. What goes hand-in-hand with dogfighters is the hanging, torturing and shooting of "cur" pit bulls -- dogs that lost or refused to fight. Finally, the image looks strikingly like a homicide scene where police have chalked the outline of a dead human body.

We have several theories on the meaning of Alexander's embroidered image, but we do not know from where her original "artistic" idea actually sprung. Presently, there are well-educated people from the South that grew up thinking and still believe that the KKK is a "misunderstood" community service organization. Alexander may be one of these people and through her image attempts to convey the commonly voiced theme that pit bulls are also "misunderstood."

In terms of romanticizing the "golden years" of dogfighters, from 1955 to 1975, the image might also represent the death of this period and the Klan's. By 1945, Klan membership had fallen below 30,000. Today's media and the general public condemn racist groups and dogfighting. Federal laws have been enacted to protect citizens against hate crimes. All 50 states have criminalized dogfighting too. States formerly controlled by the Klan being the last ones.

Despite the large teardrops and sense of loss Alexander's image conveys, nearly no American misses the era of the Ku Klux Klan nor will we miss the final extinction of the dogfighting industry. 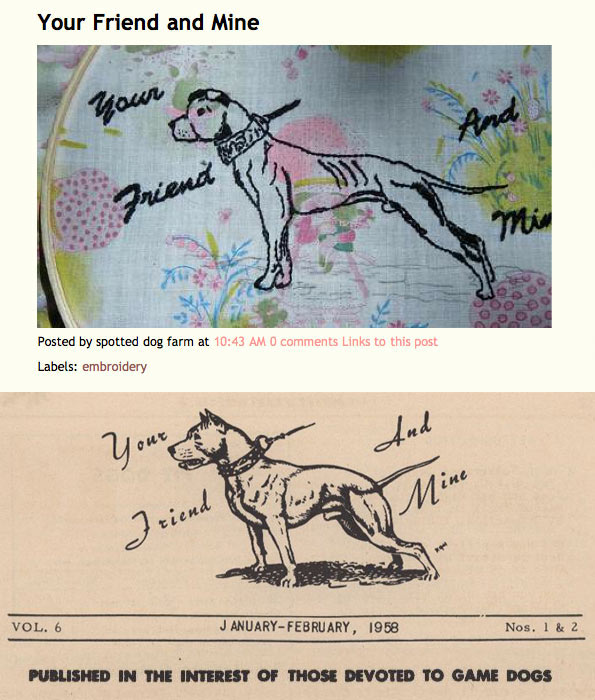 1CH Crenshaw's Honeybunch, 3 time winner and Register of Merit (ROM). Honeybunch was the best producing female of all times, in that she produced the most fighting dog champions.
2Bailey's Bingo's pedigree remarks, "1XW~ OVER A 4XW IN 1.27, NOT BAD FOR HIS FIRST AND ONLY TIME" translates into: He is a one time winner that beat a four time winner in one hour and 27 minutes.
3There were many chapters of the KKK across the country during the 2nd Klan period, some depicting the original logo, The Mystic Insignia Of A Klansman (MIOAK) with a Yin Yang symbol in the center, others depicting the "Christ blood drop" in the center with the logo in its original "x" shape and still others turning the "X" shape into an upright cross to further appeal to Christians.