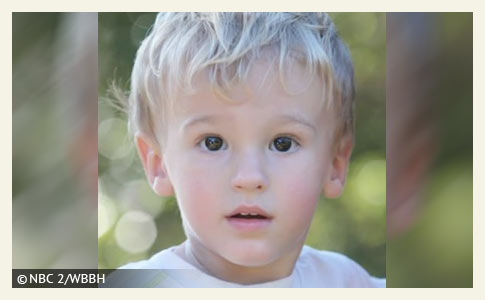 Family Dog Kills Boy archived
Cape Coral, FL - A toddler died Tuesday morning after being bitten by one of the family's dogs. According to officials, the family's 8-year old male Weimaraner fatally bit Liam Peck, 2-years old, in the neck. Connie Barron, spokeswoman for the Cape Coral Police Department, said EMS transported the boy to Cape Coral Hospital, where he was pronounced dead less than an hour later. Lee County Animal Services seized the dog from the home, along with a female Weimaraner.

Incredibly, yet commonly, this article spends more time talking about what might happen to the seized dogs, one of which killed Liam Peck, rather than focusing on the innocent dead victim. The article also inappropriately includes a quote by Dr. Robert South, an epidemiologist with the Lee County Department of Health. "It really comes down to the ability of the owner to have a well-trained dog and to teach children to be appropriately cautious around animals," he said.

According to the Merritt Clifton report, "Dog Attack Deaths and Maimings, U.S. & Canada, September 1982 to December 22, 2009," and including this most recent fatality, Weimaraners have been involved in one fatal dog attack in the last 27 years. Of the two attacks involving Weimaraners in this period -- attacks serious enough to make the Clifton report -- both involved children. During this same period, pit bulls (excluding pit bull-mixes) accounted for 153 deaths and 777 maimings.

1Directing the "weight" of understanding dog bite safety onto toddlers is wholly absurd.