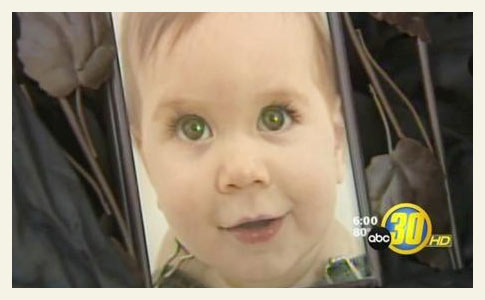 Colten Smith, 17-months old, was killed by a pit bull-mix while under the care of a babysitter.

Future In-Law's Dog
UPDATE 10/27/09: Sheriff's Deputies confirmed that the 65-pound pit bull named Max did not belong to the babysitter, rather she had been "watching it" for a week for her future in-law's. This is despite the fact that a KMPH video shows a "Warning Security Dog" sign hanging on the babysitter's fence with rusted screws. A preliminary autopsy released Tuesday confirmed that Smith's death was a result of loss of blood due to a puncture wound to the subclavian artery.

Sheriff's Deputies say there are "no plans" to arrest the babysitter at this time. The case though will be sent to the District Attorney's office.

10/26/09: Mauling Victim Named: Colten Smith
Authorities have identified the latest pit bull fatality victim as 19-month old Colten Smith1. On Friday, while under the care of a babysitter, the toddler was bitten in the throat and dragged around the yard by a pit bull-mix living at the babysitter's home. The boy was airlifted to Valley Children's Hospital in Madera, where he died shortly after arrival. The boy's body was returned to Merced for further investigation by the county coroner on Friday as well.

The identity of the babysitter will not be released until the Merced County District Attorney's office decides if criminal charges will be filed.

10/23/09: Babysitter's Pit Bull Fatally Attacks
Delhi, CA - In a developing story, authorities report that a 19-month old boy in Merced County has died after being mauled by a pit bull-mix. Authorities say the little boy wandered into the backyard while his babysitter was in another room. By the time she noticed he was missing, the dog had already attacked. The news video shows a "Warning Security Dog" sign posted on the fence of the babysitter's home where the boy was attacked by the 65-pound pit bull.

Sheriff Pazin states in the video, "These are rugged vicious animals that can just that quickly snap." According to Pazin, the babysitter tried to stop the attack by beating (or stabbing) the pit bull with a two prong barbecue fork. The dog eventually let go, and that's when the sheriff's office received a 9-1-1 call from the hysterical babysitter. She dropped the phone and tried driving the little boy to the hospital, but was pulled over by a deputy for driving erratically.

She literally handed the blood soaked toddler to Deputy Cardenas, who performed first aid until the ambulance arrived to take the toddler to a hospital. The boy was later flown to Children's Hospital Central California where he was pronounced dead. The pit bull, who reportedly belongs to the "babysitter's fiance's parents," is now under quarantine at the Merced County's Animal Shelter. Police are investigating whether any criminal charges will be filed. 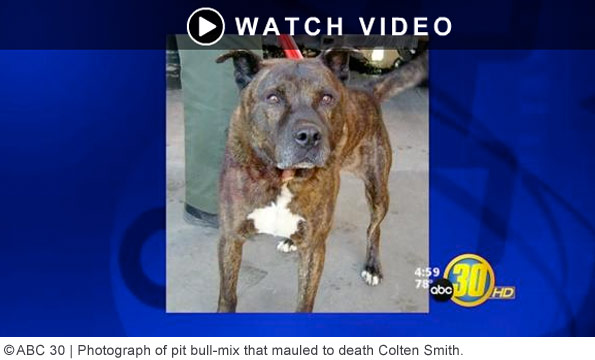 1Colten Smith's age was initially reported as 17-months old and the spelling of his name as "Colton."