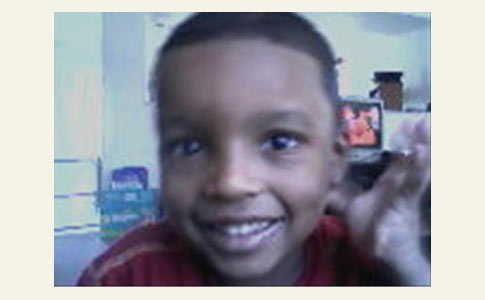 Julian Slack, 3-years old, was mauled to death by a pit bull at Camp Lejeune.

Mauling Victim Identified
UPDATE 05/16/08: Onslow County medical examiner, Dr. John Almeida, has released more information about the fatal pit bull attack that occurred. Julian Slack, 3-years old, bled to death as a result of dog bite injury. The manner of death is listed as accidental on the death certificate. Slack was at home and under the care of a babysitter at the time of the incident.

The attack occurred about 4 pm, when an acquaintance of the Slack family, who is neither a Marine nor a base resident, stopped by the family's Tarawa Terrace home with the dog. At some point, the dog was let into the residence and became "excited or startled" by something Slack may have done and attacked. It is undetermined who allowed the dog into the home.

Near the time of the attack, the child's parents arrived and transported the child to Onslow Memorial Hospital. He arrived at OMH without a pulse.

05/14/08: 3-Year Old Attacked on Base
Camp Lejeune, NC - Base officials at Camp Lejeune say a three-year old boy was bitten by a pit bull on base and died. A base spokesman says the incident happened at Tarawa Terrace. It's unclear what led to the attack. Onslow County Memorial Hospital spokesman says the father of the boy drove him to the hospital. The boy did not have a pulse when he arrived.

Last year, Dandre Fisher was mauled to death by two pit bulls at the Hunter Army Airfield in Georgia. In the past 10 years, more military bases have imposed breed-specific regulations on base housing communities to prevent tragic maulings. Camp Lejeune was not one of them (see bases with breed-specific laws). Furthermore, Camp Lejeune was sued for 5 million dollars in 2007 for a vicious attack by a rottweiler on a young girl.