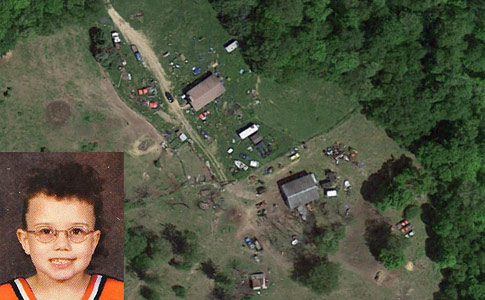 Brianna Shanor, 8-years old, was killed by a chained rottweiler-mix in Hanover.

Charges Unlikely
UPDATE 01/21/09: Police say that they don't expect to charge the owner of the dog that killed 8-year old Brianna. "Trooper Matthew Roth said the dog that killed Brianna Shanor Monday evening was chained, and the girl had been warned to stay away from him." Yet, it is well documented that the combination of a chained and powerful breed of dog, like a rottweiler, is extremely dangerous to children. Furthermore, the girl had only been living in the household for a few weeks.

There were no witnesses to the fatal attack, so it is unknown if the dog -- now being described as a rottweiler-mix -- attacked the child outside and dragged her into the doghouse, which is a converted trailer, or if the child entered the doghouse on her own and was subsequently killed by the dog. The owner of the dog, William Renda, said he only became concerned after the dog stopped barking. That's when he finally checked inside the trailer and found the girl dead.

"It is my understanding she was not supposed to be anywhere near that dog, but at some point, she must have entered the territory of the dog," said Matthew Roth of the Pennsylvania State Police.

Police said the girl apparently went into an old camping trailer that the dog could enter while chained. That's where her body was found, with serious wounds to her neck and other parts areas.

The girl was living with a guardian, William Renda, in Hanover Township, Beaver County, because her mother recently lost her job, police said. - WPXI, January 21, 2009

01/20/09: Child's Mother Speaks Out
A separate article reveals more information about the tragedy of Brianna Shanor. The young girl had been staying at the home of Bill and Diana Renda for only a few weeks prior to the fatal attack. According to her mother, Tara Wood, the couple had taken in Brianna because Wood had recently lost her job and her rented Beaver Falls home, and didn’t want her only child living on the streets. There were no biological ties between Brianna and the Rendas, according to Wood.

Wood said that she visited her daughter often, she even stayed overnight at the Rendas, while trying to rebuild her life for her and Brianna, reports Times Online. Wood said she is still struggling to find a job and is currently living with friends. She last saw her daughter Sunday afternoon. "I promised her that Mom would get a job, and we’d be back together real soon," Wood said. That will forever be a promise that Wood said will remain forever unfulfilled, reports Times Online.

Hermick said Renda told state police that the dog had been barking while he and Brianna were outside but then fell silent while he was still at the chicken coop.

Wood said she found that hard to believe, given that it was dark outside and that Brianna usually stayed away from the dogs.

01/20/09: 8-Year Old Killed by Dog in Hanover
Hanover, PA - In a developing story, an 8-year-old girl was killed Monday night after she was attacked by a dog. Pennsylvania State Police are investigating the incident, which happened about 6:30 p.m. along Sutherin Road, not far from the West Virginia border, reports WPXI. Brianna Nicole Shanor was mauled by a large mixed-breed dog owned by her guardian, William Renda, according to police. She was transported to an area hospital, where she was pronounced dead.

"It is my understanding she was not supposed to be anywhere near that dog, but at some point, she must have entered the territory of the dog," said Matthew Roth of the Pennsylvania State Police. The girl apparently went into an old camping trailer that the dog could enter while chained. That's where her body was found, with serious wounds to her neck and other parts areas, police said. The dog was taken into custody by a Pennsylvania dog officer from Lawrence County.