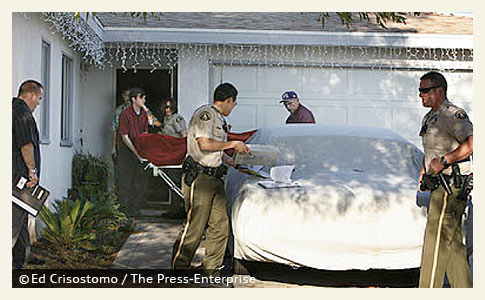 Victim Killed by Own Dogs
UPDATE 12/19/08: The Press-Enterprise reports the victim was the owner of the pit bulls. As expected, the larger male dog is now being described as a pit bull mastiff-mix and the smaller female dog as a pit bull. The dogs attacked him when he stepped outside of his home to smoke. Adelmund's family also authorized authorities to euthanize the female's nine puppies. Adelmund lived at the home with his son, daughter-in-law and their children, who are 2, 7 and 12 years old.

Two dogs mauled their 60-year-old owner to death Friday afternoon when he stepped into the backyard of his Rubidoux home to smoke, officials said.
Gerald Adelmund was declared dead at the cream-colored house in the 5700 block of Kenwood Place after deputies pulled him inside, said Riverside County sheriff's Sgt. Dennis Gutierrez...
The dogs were described as a 4-year-old, 107-pound male, part pit bull and part mastiff, and a 52-pound female pit bull, about 6.
The dogs were euthanized Friday by the Riverside County Department of Animal Services, with the permission of Adelmund's relatives, and are being tested for rabies, said Animal Services spokesman John Welsh.
The family also authorized euthanizing the female's nine puppies, but it wasn't clear Friday if the puppies had been killed, Welsh said. - Jessica Logan, Laura Lucas, Press-Enterprise, December 19, 2008

12/19/08: Victim Identified
The victim has been identified as Gerald Adelmund of Riverside. Adelmund died at 12:20 pm near his home in the 5700 block of Kenwood Place, according to information from the Riverside County Coroner's Department. Officials believe Adelmund is related to the owner of the dogs. John Welsh, spokesman for the Riverside County Department of Animal Services, said that Animal services did not have past reports of problems from that home. Welsh added that both dogs were unaltered.

The majority of dog attacks on humans involve animals who have not been spayed or neutered, he said.
"We always encourage responsible pet ownership. Unaltered dogs are always more aggressive."
Pit bulls were originally bred for fighting. But the breed's aggression is usually reserved for other animals, Welsh explained. - Inside SoCal, December 19, 2008

12/19/08: Nine Puppies in Back Yard
Additional information has been reported. There were no witnesses to the fatal attack. The adult, Hispanic male victim did live at the residence with the animals, though his relationship to the dogs' owner is still unclear. The male dog was 4-years old and weighed approximately 107 pounds (which indicates a pit bull-mix). The female was 6-years old and weighed about 52 pounds. Nine puppies were also found in the back yard. Both adult dogs have already been euthanized.

12/19/08: Riverside County Man Killed
Rubidoux, CA - In a developing story, a 60-year old man was brutally attacked and killed by two pit bulls in Rubidoux. The dogs are being described as family pets. Authorities do not yet know if the victim was the owner of the dogs. Sheriff's Sgt. Dennis Gutierrez says the man was taking a smoking break in the backyard of the Rubidoux home where he lived when a male and a female pit bull attacked him shortly after noon Friday. The victim was dead when first responders arrived.

This marks the third fatal pit bull attack in this region (Ventura, San Bernardino and Riverside counties) in the last 12 months. There have been troubling reports of two animal control agencies in the region as well. Ventura Co. Animal Services (and or the Simi Valley Police) failed to properly report the pit bull mauling of Katya Todesco, and the mayor of Lancaster recently ordered Los Angeles County Animal Services to implement a Pit Bull Sweep Operation to make the city safer.