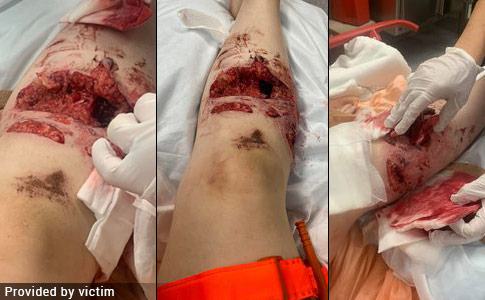 DogsBite.org - In late August, we were contacted by Nicole Baker (a pseudonym), 16-years old, who was attacked by a family pit bull and sustained devastating injuries. The dog latched onto her leg and tore out a large chunk of tissue, tendons and muscles, leaving a large, gaping hole in her leg. The attack occurred on June 26 at 10:26 am. At that time, her step-father Zach was home, along with her mother, who was upstairs, her two younger brothers and her grandfather.

The attack occurred days before her sweet sixteen birthday, Nicole said. The family pit bull had been living in the household for over a year. She said her family acquired the dog when it was 11 weeks old from a UKC breeder in Virginia, specifically Sudden Impact Kennel, which breeds American pit bull terriers and American bullies. Nicole has shared her chilling account of the brutal attack in her own words with us, along with photographs of the catastrophic injury to her lower leg.

When Nicole sits on the stairs screaming, "I’m fucked" over and over again, "thinking in my head there goes my plans of getting my permit on my birthday," you can see how the brain misfires when the body undergoes acute trauma. The brain cannot compute the severe damage while it shuts down vital functions to enter into survival mode. Also as she sits, "I'm watching my blood cover the floor, walls, and doors, going through towel after towel soaked in my blood," she said.

Nicole was in traumatic shock, heavily bleeding, most of her leg was numb, but she remembers "the exact pinch I felt," when emergency responders applied the tourniquet. "They undo the belt Zach put on to act as a tourniquet, then they did the actual tourniquet," she wrote. "I remember the exact pinch I felt, that was the only feeling I had left at that point my leg was numb." Amazingly, a team of doctors were able to save her lower leg. Amputations could be more common.

We have seen what Nicole describes next after many severe and fatal pit bull attacks. The first hospital is not equipped to treat the injury. The patient must be transferred to a Level 1 trauma center, in this case, located in Albany. "Then comes in the doctor with a few nurses. When I tell you he picked up one piece of gauze, didn’t even see the entire wound, he set that piece of gauze down so quick and stepped back, looked at me and said you’re gonna have to go to Albany."

This was a "mauling injury," not a "dog bite," which requires treatment at a trauma center. This doctor did not even see the entire wound.

Nicole said that she is currently starting physical therapy and that her wounds are almost closed. She still can't put much weight on that leg. She said that "some days are harder, some are easier" and that "each day's different." She added that she has made good progress. "I’ve come really far since the beginning," she wrote. Most of the time she has to keep her leg elevated, so her daily activities are limited. She said that doctors told her she will have to learn to walk again.

The attack was only two months ago. It's too soon for doctors to know how the next couple of years will go. However, doctors believe the pain will increase as her leg heals because of the inner damage to the muscles and tendons. Looking at her photographs, one can only imagine how intense that pain will be. Nicole said she also sustained severe nerve damage in her lower leg and her big toe is paralyzed. Nicole has suffered all of these physical horrors by the age of sixteen.

We recently wrote about the Tya Lucas attack. Her dominant arm was "more or less eaten off" by a family pit bull in May. She shares short videos of her recovery on her TikTok page. We wrote then, that a "family dog," an XL pit bull in her case, "ate her arm," consuming chunks of flesh. The pit bull in Nicole's home, "latched onto her leg and tore out a large chunk of tissue, tendons … leaving a large hole in her leg." She even felt the dog's teeth graze her lower leg bones.

We didn't ask Nicole what the scene looked like after the attack. But she did describe the scene while sitting on the staircase, saying that blood covered the "floor, walls and doors." We imagine the scene was as gruesome as the Lucas attack. Any citizen or law enforcement officer who did not know the scene was the aftermath of a "family dog attack," would assume that a violent crime or murder had taken place. Both acts, however, were perpetrated by a family pit bull.

Any dog breed that is known to suddenly attack a person unprovoked, as pit bulls historically are, -- by tearing off "chunks of flesh" muscle and tendons, and in the process "consuming" parts of it -- do not belong in any household. Nicole said that "no one could have predicted this." The dog had been living at her home for over a year. Lucas said that as her family pit bull ravaged and ate her arm, she screamed at the dog, "Hercules It's me!" But there was no recognition by the dog at all.

Sudden Impact Kennel appears to produce pit bulls with "sudden impact," of which pit bulls were already selectively bred for. There are two words involved, "sudden," as in a sudden unprovoked attack with little to no stimuli beforehand (Nicole had opened up the gate at the base of the stairs). The second word is "impact," as in a completely disproportionate response -- a severe mauling -- to minor stimuli. What better states "impact" than Nicole's injuries -- a catastrophic hole in her leg?

"Sudden impact" does not mean "sudden impact to intruders only." It could potentially involve anyone around the dog, including its owner and family members. Nicole states, "watching Zach sweating and stressing trying to get what we thought to be one of our protectors completely attack me." The alleged "protector" that suddenly turned into the family attacker, because the dog makes little to no distinction among its victims, a quality of being bred for explosive aggression.

Nicole's account of her attack is terrifying. From the brutal attack to her blood covering the floor and walls, to the two tourniquets being applied. From the ambulance lingering in the driveway for 30 minutes, to the two doses of fentanyl that made her feel "even more nervous." From the doctor who said, "send her to Albany," to the emergency surgery she was terrified of undergoing, and finally, to her trying to understand what "was happening but at the same time it was all so real."

Nicole has a long road ahead of her. The injuries she sustained are devastating. She is only 16-years old, yet will face a lifetime of permanent disfigurement. It is unknown how much function and feeling will return to her lower leg. We do know one thing. We have seen severe injuries like hers before, and after many surgery procedures, they heal remarkably. Medical advances move quickly too. There could be options available to her three years from now that aren't available today.

Visit her GoFundMe to help cover medications and medical supplies that she needs. 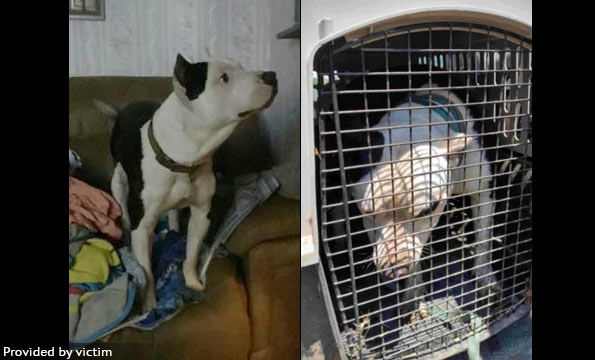 The male family pit bull, "Southy," that inflicted the attack. Southy was from a Colby bloodline and UKC registered. The photo on the right is when the dog is being seized after the attack. 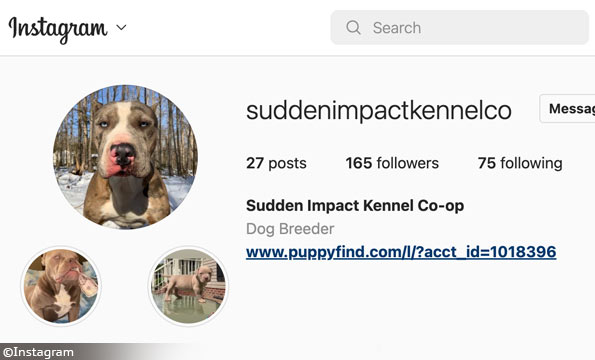 The family acquired the male pit bull over a year earlier from this breeder in Virginia.